Exactly five years ago on a Friday I was sitting in a professional development meeting at my school when I got a text alert about a shooting. Unfortunately, having gotten many of these alerts over the years, I didn't think all that much of it. However, as the day progressed and information came out that it was at a school and we learned of the atrocity that took place in Sandy Hook, it hit me hard. I'm an elementary school teacher, and I couldn't help but picture myself in the massacre that took place. By the time I got home I was pretty much a wreck, and had been thinking about what I would have done had it been my students in that situation. At the time, I was not a parent, but my wife was pregnant, and we were expecting our first child four months later, so I was also looking at it from the view of a parent-to-be.

As a history major in college, I spent a little time learning about the the Constitution, and knew that in the coming days after what took place in Conneccticut there would be a discussion about the Second Amendment. Over the years, the NRA, and gun proponents have taken it to mean that everyone has the right to have a gun. However, in my mind, the exact wording doesn't exactly imply that:

"A well regulated Militia, being necessary to the security of a free State, the right of the people to keep and bear Arms, shall not be infringed."

We don't exactly have militias running around, do we? We have a free country, and the 'Right' has twisted this statement into something that I believe it is not. As a result, gun laws have become extremely lax in many parts of our country, and death from gun violence is the result. Compared to other first world nations, the number of deaths as a result of guns is astronomical. The often used line is 'Guns don't kill people, people kill people.' Well if this were the case, wouldn't there be an equal number of people being killed in some other first world countries? There isn't! 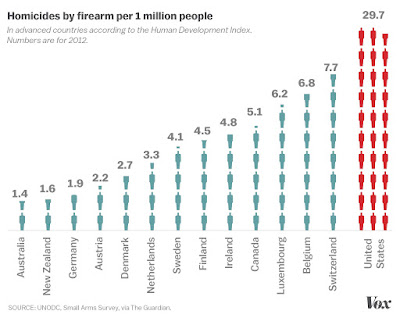 I honestly, thought that having an entire classroom of first grade students along with several educators killed could be a turning point in the 'gun debate.' I was hopeful that our country could turn a tragedy into real change. However, since Sandy Hook nothing has taken place in terms of gun control. We've had many other tragic massacres since then - Virginia Tech, Orlando & Las Vegas - and the only thing happening is that this is almost becoming the 'new norm.'

It doesn't have to be this way. I'm not against having a gun for hunting or even for personal protection if it is stored and locked properly. But all too often we hear stories of kids finding loaded guns and either shooting themselves or other kids. Background checks seem like common sense, and the majority of Americans, even those who own guns, feel this way. Mental health screenings would also add a layer of protection. Ultimately, the best way to prevent more tragic events like Sandy Hook from taking place is to severely tighten gun restrictions and ownership. Semi-automatic assault riffles do not have a place in our society. 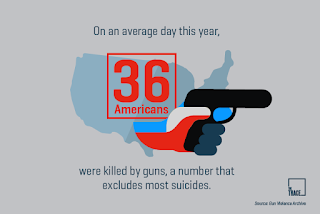 On this anniversary of Sandy Hook, I am guardedly optimistic that we, as a nation, can make change. These are deaths that can be prevented. The US is on pace to soon have gun fatalities surpass the number of people killed in motor vehicles. The car industry is doing everything they can to make cars safer and limit fatalities. Shouldn't gun manufactures and our government do the same?

This isn't my typical blog post, but I felt like I had to put this out there as an educator, parent, and someone who cares about our country. We can make America great again by lessening the thousands of senseless deaths that occur each year due to lax gun regulation and the NRA lobbying for less stringent gun laws. This honestly seems like common sense, and I can't understand (other than $$$$) why this can't be done.