After finishing up my race in Tennessee I decided to shift the focus back to running for a little while. I know I will need to have a strong run at IMLP to meet my goals, so I decided to put in a little block of run focused training to lead into the winter. I signed up for a mid November half marathon - signing up for a race always helps me have an end goal, and gives me a little kick in the but motivation wise during training.

I built the run mileage up over two weeks to around 50 mpw and held it at 50-57 for eight more weeks. Just before Halloween my Mom came to visit for a weekend when Katie was signed up for a local 10k race. The race nearly goes right by our house, so with my Mom there we decided to take advantage of her help watching the kids, giving me a chance to run as well. I did a harder track workout a few days prior to the race, so didn't really know what to expect.

This was the same race that I was leading last fall, but missed a very short out-and-back, ending up in a DQ from the race. This year I finished up third OA in 37:34, which is exactly one minute off my 10k PR from five years ago. I was hoping to be a bit closer to 37 minutes - I guess I'm always hoping things will go a little better than they usually do. High expectations are a part of who I am.

Leading into the November half marathon my legs were feeling good, but I didn't really feel like my fitness had improved much over the past nine weeks or so. My goal was to shoot for pretty even splits, then try to have a strong finish. We visited my folks on Nantucket the day before the race along with Katie's parents, making for a long day of travel. Getting home Saturday night the forecast wasn't looking stellar for the Sunday race. A windy, rainy day was forecasted for Sunday.

I got up around the normal time - 4:30ish - had a quick breakfast, then was off just after 5 am. The race was in Cambridge, MA starting and ending at the CambridgeSide Galleria Mall. I parked in a lot, got my race bib, and then had around 90 minutes until the race began. I ended up doing around 2.5 miles of warming up, then tried to stay in the lee of some buildings before lining up for the race. This race was only in its 2nd year had a field of 5,000+ in the first year. There were nearly 50 people under 1:20 in the first year, so I assumed the same this year. I think I ended up self seeding myself too far back at the start, and, as a result, did a ton of weaving through slower folks over the first two miles. This two miles were both around 6:10, but I felt I could have been a bit quicker on the same effort without all of the weaving about!

After getting to the Charles the course started a switch off from paved trails to dirt trails. This continued for the middle portion of the race, and several of the dirt sections were quite muddy and slippery, definitely causing my middle miles to be a bit slower than I'd hoped for. As a result, miles 3-11 ended up averaging around 6:20 pace. The return section of the race along the Charles after recrossing the river had quite a bit of headwinds, and were very exposed. I was running with a few other folks, but could feel them fading. I ended up pushing on by myself and was able to finish pretty strong. The very last section, turning away from the river, was on a dirt path that was pretty much completely submerged - good times!! I didn't run xc in high school, but I feel that a few sections of this race had a xc feel to them. 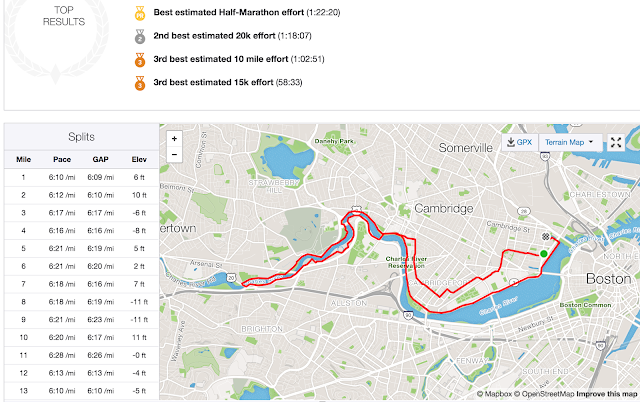 In the end, I was able to sneak in under 1:23 in and official time of 1:22:49, which is about two minutes off my half marathon PR from four years ago. Surprisingly, my legs felt great after the race. I guess the higher volume led me to be able to run pretty consistent splits - maybe my speed didn't improve much over the nine weeks, but the endurance seemed to get a bit better. One positive takeaway is even though I finished 77th overall, there were only four folks older than me who beat me.

I'm toying with the idea of registering for a February marathon to test the fitness, but not looking forward to the longer runs of around 20 miles. I'm hoping that this time will get me into the NYC marathon (which allows half qualifying times) for next fall. I guess I'm leaning towards not doing a marathon, but continuing with run mileage in the 50-60 mpw range with the hopes of getting down near 1:20 in early spring - possibly a March race - before IM training kicks into full swing! 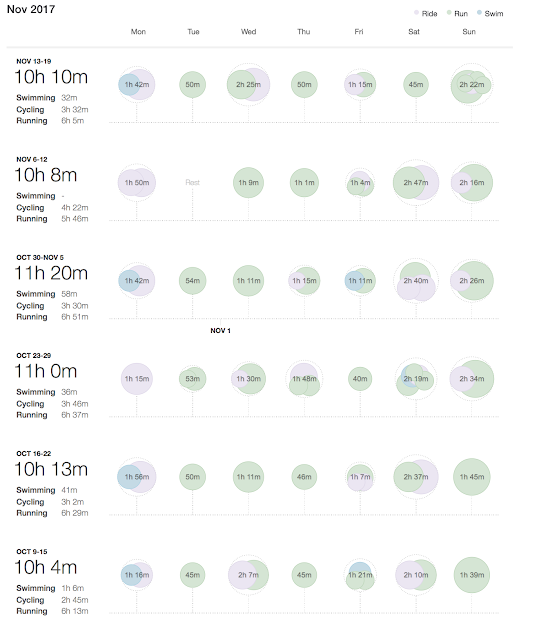 In terms of general training, I've been averaging 10-11 hours a week. With a run focus, it's meant 2-3 rides and about one swim each week. The rough plan is to slowly begin ramping things up around February, and at that point I'd switch over from focusing on the run to bringing in more biking and hopefully two swims a week. I feel like I'll need to be swimming 3x a week from May on, and one of those will be an OWS at Walden Pond either on the way to or home from work.

I'm also planning on tackling the Mt. Washington bike climb, which is in mid August. I've been getting the CAAD 10 road bike geared up for that race. So far, I got a new P2M power meter with a 50/34 chainring, a WiFLi Force 22 rear derailleur along with a 11/32 cassette. I picked up some climbing wheels - Alto A26 - which come in at just over 1400 grams, and I also got a Dash saddle. All told, the bike is around 16 lbs currently. I have some Speedplay Zero stainless pedals ordered, and with a few more race day adjustments - like taking off the rear brake - I hope to get the bike weight down around 15 lbs. I know this is by no means light for a true climbing bike, but it should help. It would also help if I can get my weight down. Lots of people obsess over bike weight, but it's so much easier (and cheaper) to drop body weight. I hope to be close to the hour mark if the race day weather is favorable.