Always On The Go! (well, almost)

This summer has so far been a real whirlwind. We have spent more time away from home, but things are starting to settle down before the start of the school year. Here's a breakdown of where we've gone since our trip to Nova Scotia:
- Three nights near Tanglewood in the Berkshires
- Trip to Nantucket for triathlon & visit with the parents
- Long weekend in NH to visit Storyland with friends
- Three day trip to Truckee, California for a wedding
- Four nights in Southwest Harbor, ME

One thing I've gotten very good at is packing up our car! Traveling is nice, but it's also really nice to be able to sleep in your own bed. With all of the travel, trying to fit in training has been a little tricky, but I've been able to get it done for the most part.

In Mid July we headed to Nantucket to visit the folks and for me to do the Nantucket Triathlon. I think this was my fifth time racing on home soil, and I was hoping to better my 3rd OA position from last year. Knowing that Beau Garufi was racing meant I was going for 2nd place. He's a former D1 swimmer, and there's no getting around that!

The weather wasn't exactly ideal - there was a bit of wind (headwind on the 2nd half of bike) and quite a lot of rain. The rain definitely slowed things down on the bike course. My power was pretty comparable to last year - around 315-320 watts - but my time was a minute slower due to taking things more carefully with slick roads. Coming off the bike I was about three minutes behind Beau, and knew there was no way of catching him. I was pretty much in no-man's-land, and tried to get the legs turning over. It was to no avail, as I haven't done that much running faster than 6:00 pace, with the focus on the 70.3 distance. I was able to average around a 6:15 pace, and it was good enough for another 3rd OA at the end of the day. One good take away was having quick transitions compared to the other top folks. 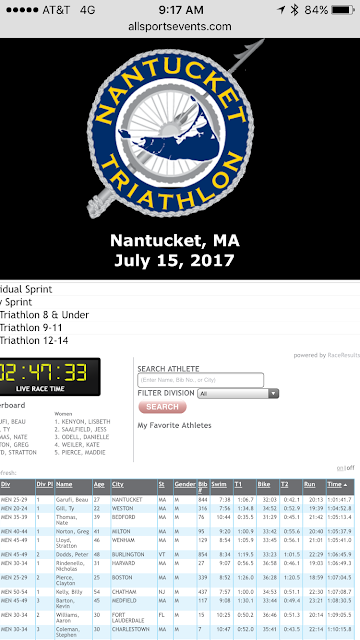 At the end of July we headed west for a wedding in the Sierra Nevada Mountains. Our college friend Tom was getting married in Truckee, and we were bravely taking along 'little one,' AKA Hannah. This was actually her fourth plane trip, but the longest one thus far. Overall, she did OK on the plane, but I did end up walking a lot with her in the aisles! The return flight was a red-eye on which she slept maybe 2/3 of the time. We, on the other hand, got very little sleep. I just can't seem to get comfortable in a seated position on a plane. 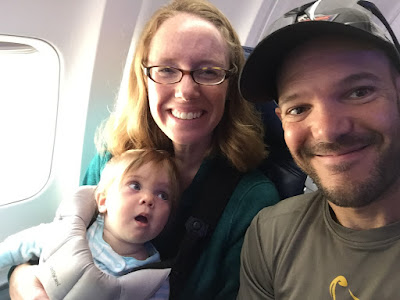 The wedding was great, although we were a bit thrown for a loop when we found out that the dress code was 'mountain formal.' WTF is that???? Ties were discouraged, and Katie attempted to dress me well for the event. It was awesome to see so many college friends. It seems that the only time we see many of these friends is at weddings, but those are getting fewer and fewer.

I got in a nice 14 mile run the morning after the wedding, going around Donner Lake twice. The altitude definitely impacted things, and my pace & HR were definitely off of 'normal' a bit. On Sunday we drove back to SF, but the traffic was pretty horrendous! It took well over five hours to get into the city, and we managed to have a short visit with my sister-in-law, before getting to the airport. 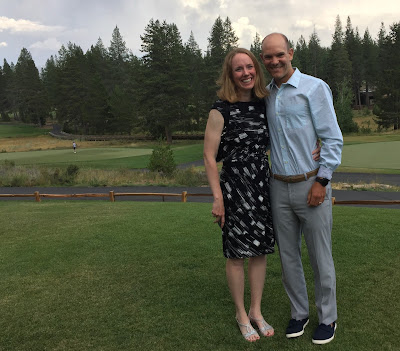 A few days after getting home we were again off! This time there was no plane involved, but a rather long drive to Mount Desert Isle, ME. Along the way we stopped off at Bates, where Katie and I both went to college. It had been five years since we'd been back, and quite a few new buildings had popped up during our hiatus. It was the first time on campus for both Jackson and Hannah. It was a good 'break up' spot, as Hannah wouldn't have survived the five hours straight in the car. Bates is almost the halfway point, so it worked out well. One thing that we wanted to do was get out to see the new boathouse for the crew team, but that will have to wait until our next visit. 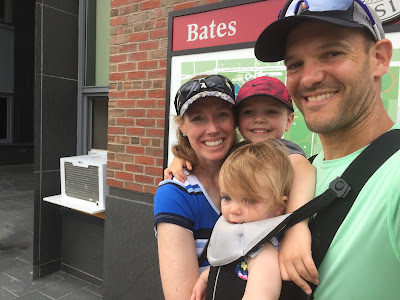 We were able to get in a short hike, and Jackson found a great place to throw stones in the water, one of his favorite activities! The weather was cooler than in the Boston area, which is always a nice change. 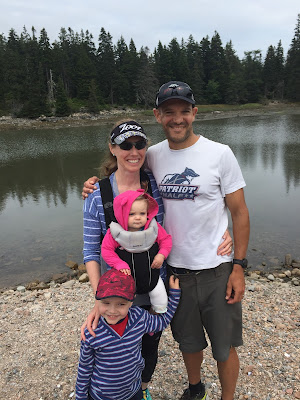 I got in a few rides while were there. I always love getting out early, and my rides were pretty free of vehicles. I've found that I like doing bike intervals on Sergeant Drive and longer rides going into the park on the Park Loop Road. I also got in a swim at Echo Lake, and there was a nesting loon right near the beach where I began my swim. 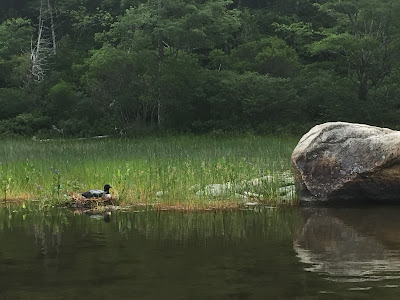 Right after getting home from Maine we went into Boston for our first 'Sox game of the year. It was a great game and Jackson had a fun time, although waiting in line for 40 minutes to get a balloon 'Wally' wasn't so awesome.

The next few weeks before school begins include an Olympic race on August 20th and another visit to Nantucket to visit my parents for a few nights. I'm then headed to Tennessee for the 70.3 WC on September 8th. Fitness isn't what it was last summer, but I still hope to put together a decent showing. 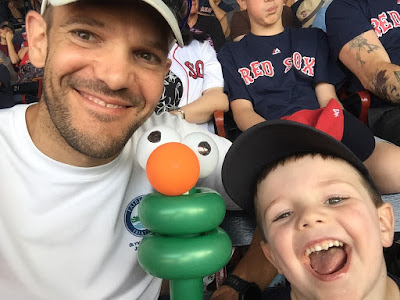