My primary goal heading into Eagleman was to secure a spot to the World Champs in Chattanooga in September, and I was able to meet that goal. However, my run seemed to let me down and I ran much slower than what I though would be my 'worst case scenario.' I knew my fitness wasn't quite as good for this race as it was at the end of last summer, but I felt with a decent run I'd be able to get close to the low 4:20's mark. Here are my splits, courtesy of sportstats.ca, the timing company for IM. They do an infinitely better job of updating splits during races than the ironman website!! 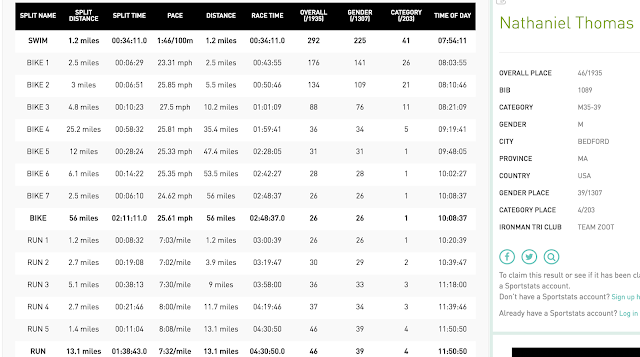 I began with what I feel was a pretty good swim considering how little swimming I did since last season. For a majority of the months from September - February I swam once a week. In March and April I tried to add in a second swim on some weeks, and by mid May I was able to get into Walden Pond to do a few open water swims prior to race day. The swim ended up with a time of just over 34 minutes, three minutes slower than my 70.3 swim PR, but about what I expected. I feel like I sighted well and swam the buoy line, and I'm not sure of the accuracy of the 2400 yds my Garmin (in swim cap) gave me. The new Zoot Wikiwiki felt great as well! Regardless, I was out of the water and ready to hammer on the bike. 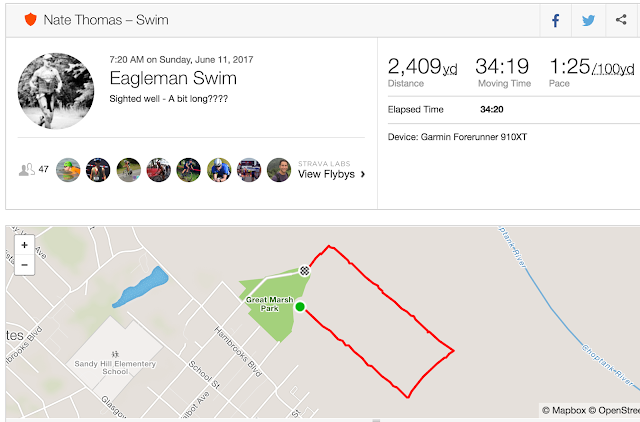 The run into transition was maybe 200 yards, and I took advantage of the strippers. My only regret is that I had no tip for their fine service! Into T2 and I put on my helmet, stashed my flat kit in my rear pocket, and was off. I was hoping for a bit quicker transition, but looking at others in the AG, it wasn't that slow.

Based on training, I felt that targeting the low 270's for watts was the goal, but I wanted to ease into it a bit, knowing my HR is always high for the first 10-15 miles of the bike. After getting out of town I began to settle into my watts, trying to hold the best position possible, and passing tons of folks in the process. As can be seen below, I was pretty consistent in terms of speed and wattage range.

Somewhere just before the 34 mile mark I managed to drop my concentrated bottle of Infinit as I was taking it out of the cage. Being my only nutrition, I quickly stopped to retrieve it. In the process of restarting I rushed and managed to drop my chain. This whole fiasco, which seemed to take about an hour, only cost me a minute or so. However, I knew I had been on pace for a ride of right around 2:10. As you can see below, I had a peak power of a bit over 550 watts in trying to get back up to speed. I knew it was unwise to try getting that wasted time back, so I again settled into my wattage range and cruised by many folks. 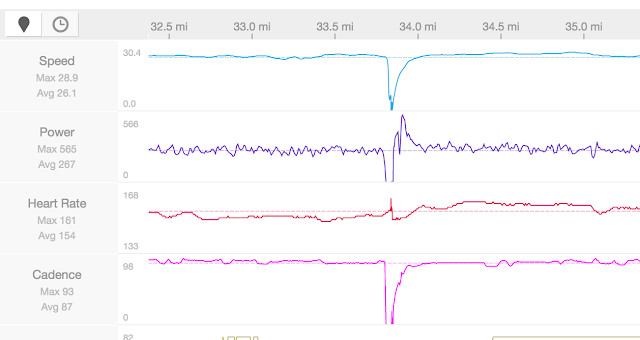 I've heard that Eagleman is a flat race, and the profile below the map does it justice. There were a handful of virtually flat bridges scattered throughout the Blackwater National Wildlife Refuge that accounted for about 100 total feet of elevation. For the most part, the road surface was good, but there were definitely some bumpy sections that killed the speed. Any road hazards were clearly marked with spray paint, which was great! 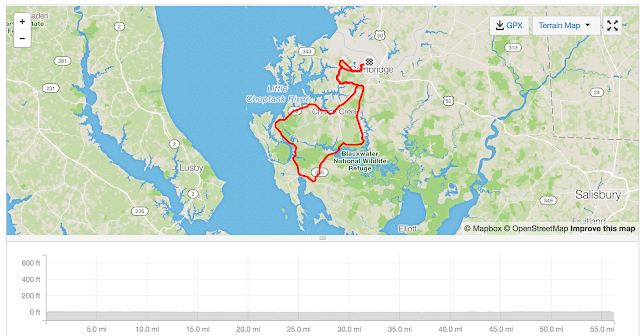 In terms of gear for race day, I feel like I'm always trying to add a thing or two each season to get a better position. Last year I added in the new Giro helmet, and this year I added in the Giro shoes with elastic laces. The pics below are poor screen shots, but I feel I've got a pretty decent position. I really tried to shrug the shoulders and tuck the arms in right against my water bottle. After loosing some nutrition via my rear bottle holder I went to a X-Lab Gorilla that is zip-tied in, and it worked great. The new Team Zoot kit was great. I'm not all that psyched about the fit of the two-piece suit I have, especially the top in regards to wrinkles and a bit low neckline that sometimes grabs air. However, I was able to have the fastest amateur bike split on lower than goal wattage. On the back end of the course there were some sections where I was fighting a head wind and really trying to get as narrow as possible to maximize my watts. 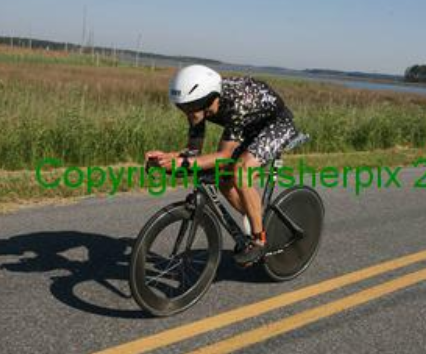 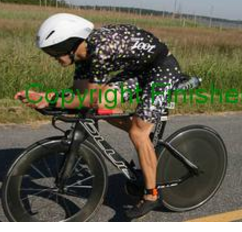 Coming into T2 I knew I wasn't going to go under 2:10, which was a bit frustrating. The last little bit of the race is a slight downhill into T2. I came in at my 'normal' speed, taking my right foot over the saddle and planning on running with the bike, my left foot hitting the ground first. However, this didn't exactly happen correctly. My best guess is that when my left foot hit the ground it was a bit behind my center of gravity, because I did a complete somersault, managing to not hit my head, and having my bike mimic my acrobatics. A bit scraped up, but not injured, I quickly jumped up, grabbed my bike and a shoe that had popped off, and ran into transition. This fiasco, coupled with my bottle drop definitely hurt my chances of a sub 2:10 ride, but I knew I was still in a good position.

Unaware, I was actually 1st in my AG after the bike coming into T2, having been 41st after the swim. I had decided to throw on a running singlet and run with a nutrition belt. The belt has two small bottles, one of which had three gels, and the other had eight salt taps dissolved in water. I actually felt pretty good heading out on the run, but made a very concerted effort to take it easy and target a pace in the 7:00-7:10 range and a HR under 160. I ran 1:29 at Florida 70.3 last spring - it only got to around 80 that day, but it was a hilly course. The forecast for Eagleman was to get into the low 90's. However, I feel the real difference was that the run at Eagleman is nearly all exposed and the radiant heat coming off the pavement makes it feel much hotter.

I made it to around mile three with a HR of just under 160, and was still feeling good. However, somewhere between there and mile five I began to 'feel' the heat. It is a bit hard to explain the feeling, but my pace began to drop and my HR began to rise. The effort got more intense, and I made a point to take the aid stations slow and take in lots of fluids. I was in the 2nd wave of my AG, and around the 5-6 mile mark I was passed by someone from the wave that was 4 minutes in front of me. As the miles ticked by slower and slower there seemed to be nothing I could do to even try to maintain the pace of the previous mile. I was passed by another two fellow AG-ers, but could only watch them run away from me. Talking to others after the race who were from New England or other colder areas, it was agreed that training for the heat is damn hard if you don't have consistent heat to train in! Seems like a no-brainer, but without heat to train in, I melted. The 70.3 WC in Tennessee should be warm in September, but I will make a point of getting in lots of training during hot and humid conditions over the summer. 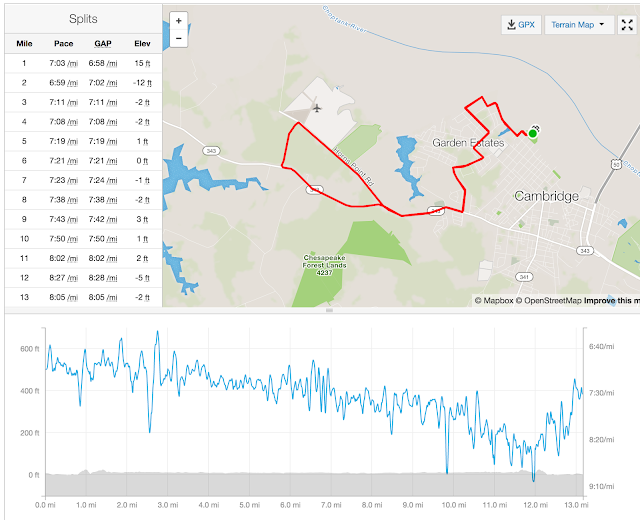 Nearing the finish, trying to speed up to 7:30 pace felt like closer to 5:00 pace. Finally crossing the finish line, I still felt like I probably had a WC slot, but with the two waves for the AG it was unknown. I found some shade and chatted for a while with other racers. I had a chance to talk with Eric Wheeler about his race. I also got a chance to meet Mike Gadzinski, and guy who's owned Eagleman, and who has inspired me to get faster in the sport.

Eventually, we were allowed back into transition. I was able to grab my phone and see that I'd come 4th in the M35-39 AG. Not what I was looking for, but I probably didn't have a shot at 1st in the AG. Without the bike mishaps, slightly quicker transitions, and a run that was 4-5 min faster I could have been 2nd. However, hindsight is always great to speculate about, but I'm not Hermione Granger with a time turner (Harry Potter reference), so it ain't happening!

Looking forward, the school year is done today! We have quite a bit of traveling planned, including time in Stowe, VT, a week long trip to Cape Breton, visiting the folks on Nantucket, and a wedding at the end of July near Lake Tahoe in Trukee, CA. Sprinkled in there are two sprint races and an Olympic. I hope that training can be consistent and that I have a strong showing at the WC in Chattanooga. My goal for that race is to be pleased with my effort and execute against a strong field of racers.