I'm now 11 days out from Eagleman, which has been the focus of my training over the past five months. Starting in January, I slowly built the monthly volume from 40 hours to 66 hours. The basic structure of my training stayed very consistent, but I simply increased the duration and intensity of key workouts. I haven't taken a full day off since February - I've found that I do better with active recovery instead of complete rest. 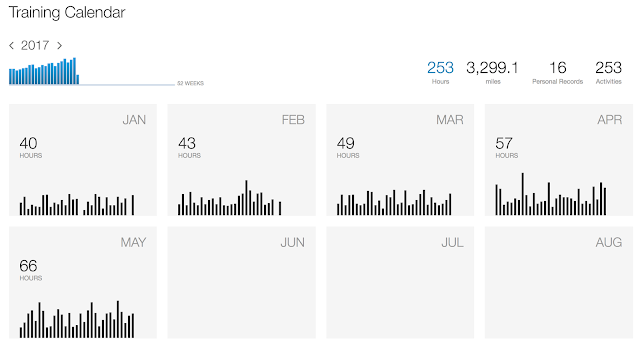 Heading into Eagleman, I feel like my fitness is good, but not quite where it was in the middle of last summer. However, if I have a good day I feel that a 70.3 PR could happen, which would mean going under 4:21.

I have a series of goals for the race, which are ranked in order of priority.
1) Qualify for the 70.3 WC - this should have happened at Timberman last summer, but a flat ruined that chance - I'll probably need to place in the top 6-7 in my AG based on 75 slots
2) Set a 70.3 PR - this is doable if I have a decent swim and execute a solid run in the heat - the bike should set me up well for doing this
3) Win my AG - this is of course highly dependent on the competition within the AG, but it's been a goal of mine for a while to accomplish this

I've picked up a few 'toys' for the season, chief among them a new pair of shoes. Taking ideas from Thomas Gerlach and others, I modified a pair of Giro shoes to hopefully be a bit more aero and save a bit of time on the bike. I also recently got a Garmin 735XT, which I really like. My first run was a track workout, which can be seen below. Switching between sports is much easier than on my old 910XT, and the size and feel of the watch is much better than the 910. It won't save me any time, but it's less clunky than previous watches I've worn (305, 310, and 910). 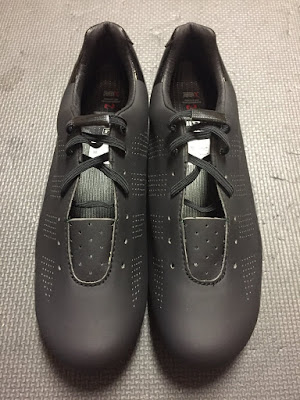 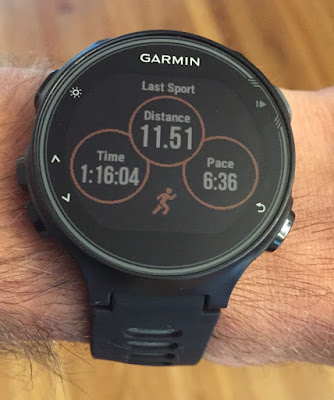 Having a second child has been awesome, but with minimal training for most of the fall, my weight had crept up to close to 180 - YIKES! Starting in February, I made it a goal to eat healthier and focus on quality caloric intake. Over three months I was able to drop around 10 pounds, and I hope to be around 166-167 on race day for Eagleman. Weight was measured at roughly the same time prior to morning workouts. 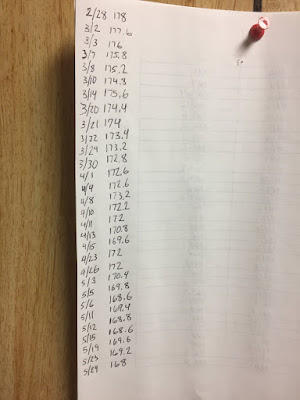 Another new 'toy' that I acquired was a wetsuit. I actually was growing to like my Roka Maverick Elite that I used last season, but, without meaning too, I found a new Zoot Wikiwiki for 75% off the sticker price. I couldn't not buy it at that price, so I now have a sweet suit to go along with my Team Zoot kit. I've gotten in three OWS in it thus far, and feel like there will be a growth period with the suit. I love the shoulder flexibility, and have been messing with the neck closure to minimize water getting in the suit and minimize chafing on the neck. 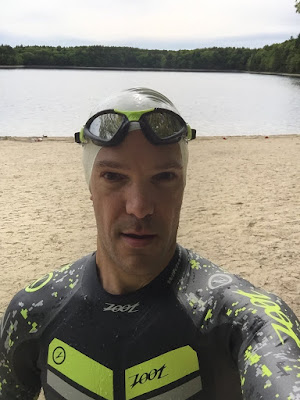 In getting ready for Eagleman I've done a bit of heat/humidity work. Using our basement bathroom with the shower on I've done some rides at HIM effort using HR as my guide. It's amazing how not using fans and upping the heat/humidity causes the body to heat up and power drops dramatically. Below are two screen shots from rides during the same week. Both have the same HR, but power is a bit different. I've seen around a 20% power reduction without using fans and in the bathroom - this is around 70-80 watts! 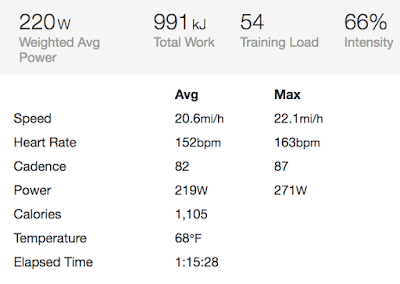 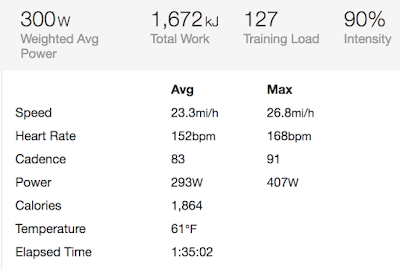 Below is my final block of training heading into Eagleman. Nearly all of the workouts were done in the early AM hours - swimming being the exception. That is really the only way I can get the workouts in with two little ones! Sleep has obviously taken a hit by getting up so early to fit things in. I also spend time with Katie once the little ones are in bed. That means that when I get seven hours of sleep it's a miracle. Most nights are closer to six hours. Definitely not ideal, but I feel like I'm getting decent recovery. 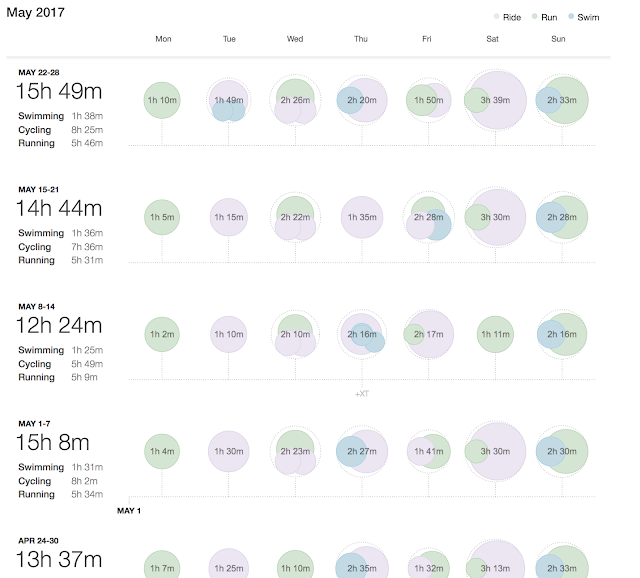 A recent workout I did makes me feel good about having a strong bike ride at Eagleman. The main set was 6x (6' @ FTP with 1' recovery around 60%). While hard, it felt doable and it may be a workout I extend to 8x over the summer. My goal time for a bike split at Eagleman is close to 2:10. 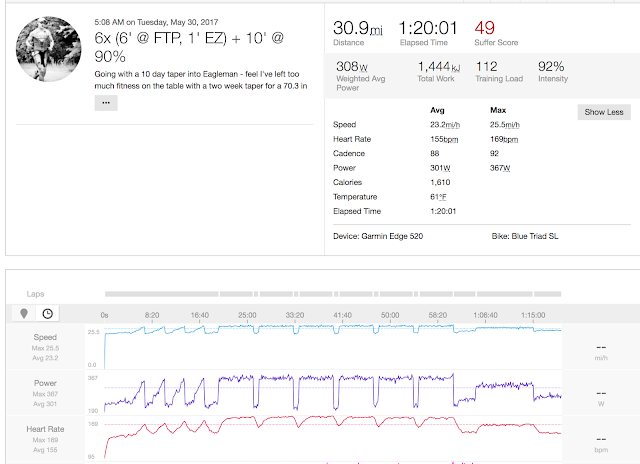 We recently visited my folks, who live on Nantucket. My Dad isn't doing very well, and is pretty much bed-ridden, so it can be a bit depressing at times. He has a combination of Alzheimer's and Parkinson's diseases, which means maneuvering and memory are shot. At times he can provide a bit of comic relief with the random things he says. It was nice to see my grandmother who also lives there. She is going to be 99 in October, and Hannah just turned eight months old. Quite a range of ages! 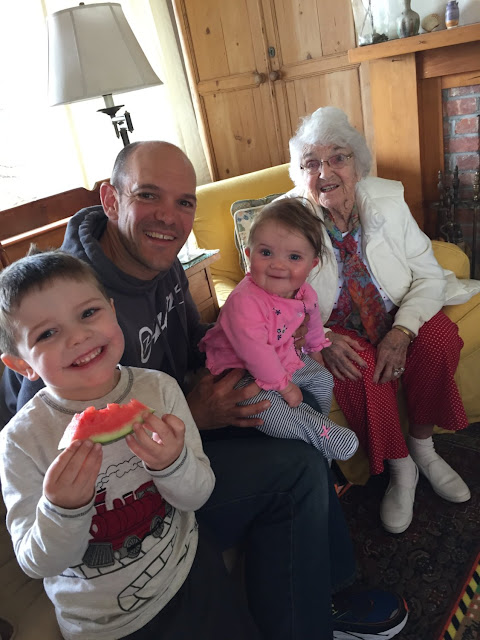 I hope that my next post will be a positive report about executing a good race at Eagleman!