March has arrived, and that means outdoor riding is no longer a hopeful thought, but a relatively close reality. I'm optimistic that by the end of the month I may get outside on the bike - that would mean a relatively warm early Saturday morning, as I imagine that's the only real time that would fit into the current daily schedule. The schedule is now back to early morning workouts every day and a Thursday afternoon swim. Swimming once a week is not ideal, but it's what currently works. Getting to the pool a second time M-F isn't going to happen unless I take a day off from work. However, my swim has degraded enough that it's no longer degrading - as if that's a positive thing! When home on the weekends (which is rare) I will try to get in a Sunday early morning swim before the long run.

At the end of the season in 2016 I was hitting 100 yd repeats around 1:21-1:22 on a 1:40 sendoff. Now it feels harder to touch around 1:26-1:27 on a 1:45 interval. As has been the case over the last few winters, the swim will come back with a bit more volume. With the warmer weather I plan to eventually get in an OWS on the way to work one morning. Maybe I'll be able to convince Katie that I can swim one more afternoon each week in May leading into Eagleman, but that's probably being overly hopeful.

Run and bike training is going better than the swim, as I'm able to do either in our basement each morning. As a result of less overall training and not being as watchful as I should be, I've put on around five pounds since the end of last season, and am now at around 175 pounds. I'll need to get down to 168-169 by June, but that's doable if I'm a bit more conscious of what's going into the body. As a result of the weight gain, the run has taken a bit of a hit and I feel a little bit more sluggish. I did run a 5k about a month ago and finished in 18:07, so I've still got a little speed in the old body! It was quite the blustery day, so, considering the conditions, I was pretty happy with how the race went. It was a little over 30 seconds off my 5k PR, but that was set 14 months ago when I was focused on breaking my old PR.

Run mileage has been in the 35-50 mile range each week (four to six hours). Around a month ago I felt a slight tightness in my left hamstring, and it hasn't gone away. I felt it a bit more than 'usual' on Wednesday when doing some track work, so I'm taking a few days off from running. The plan is to do all runs at an easy pace for the next two weeks and see if the 'niggle' is still an issue.

In regards to biking, I'm up to around four hours of riding a week and am feeling pretty strong for this time of year. Back in January I finished 2nd OA at the Northeast Multisport TT at Goodale's Bike Shop in Nashua. The Computrainer was a bit overly optimistic with my wattage, but apparently that was true for quite a few folks. The actual wattage according to my Power2Max was around 20 watts lower. 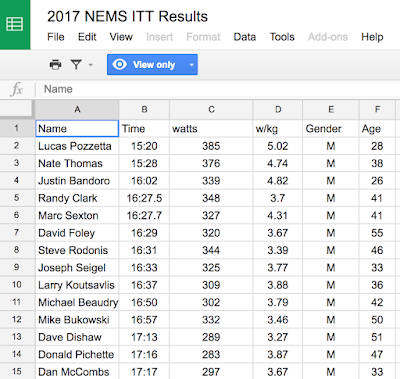 Eagleman is now around 14 weeks away, and the bike volume will continue to increase. This past week was my first two hour ride since September, and I plan to get in two to three hour rides every Saturday (or possibly midweek if needed due to weekend conflicts) for the next 12 weeks or so.

Overall volume this year will be quite a bit less than in the past due to a focus on the family. I envision being able to get in 10-12 hours most weeks, with a peak week in the 13-14 hour range. I feel this should put me in a good position for a strong race in Maryland. I also plan on doing a bit of heat acclimation in the sauna after each swim in the month prior to the race, as well as some rides in the basement bathroom. I did this for FL 70.3 last year and feel that it certainly didn't hurt my performance.

Looking forward, the race schedule for 2017 is beginning to take shape:

The past week was February Vacation, and we split our time between three days in Maine on Mont Desert Island and three days in Bartlett, NH. Jackson had his first two days of downhill skiing at Cranmore. Here is a parting shot of his first ride up on a chairlift. 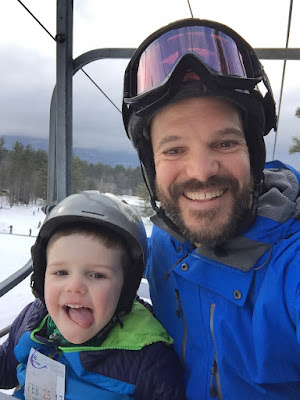