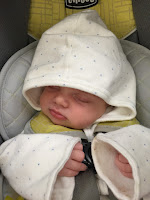 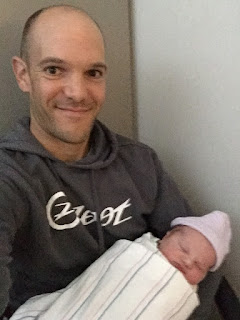 My last post ended with a consideration of the Philly Marathon, but that ain't happening! I seem to have a foggy memory of life with a new baby, and this being our 2nd, it compounds the attention and time needed to devote to family life. Less sleep and what only seems like 20 hours in a day has led to a drastic reduction in training. 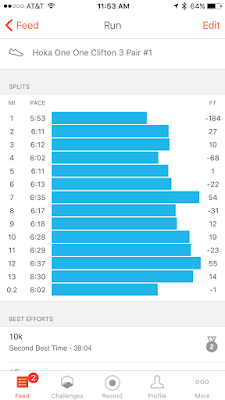 Hannah Breton Thomas joined us on September 16th. She was a surprise in that we didn't know what gender he/she would be. Katie and I just wanted a healthy baby, but Jackson was very insistent that he was getting a sister - he seemed to know! She is now just over two months old, and has become quite a good sleeper. Katie is taking the school year off, and her new job is being with Hannah at home, one she's enjoying. 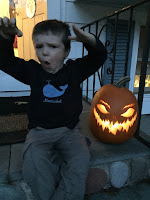 A few weeks after Hannah was born I ran the BAA Half Marathon. I was hoping that I could hang on to some of my fitness from the tri season, but I overestimated my run fitness. I also had to make an unplanned potty stop, but I was able to be in and out in under 25 seconds - pretty sure that may be a #2 record! To the right are the mile splits - you can see mile 7 for the bathroom break and around mile 10 where the wheels started to come off. I ended up just over 1:23 in terms of overall time - I guess I'll take it on 'baby fitness.'

Soon it was time to start thinking about Halloween. Jackson had decided he wanted to be a construction worker, and I came up with the idea of having Hannah be a traffic cone. We thought it was a funny combo. Katie's mom thought it was horrible, as she wanted Hannah in some cute costume. I ended up finding a traffic cone hat that I cut and modified to work as Hannah's costume. For Jackson's costume we had most of the parts and only had to get him some boots. 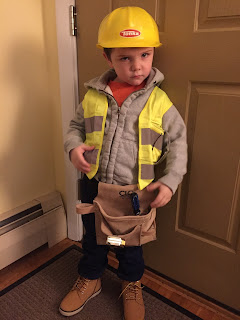 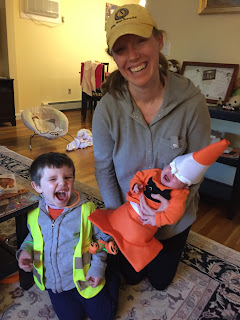 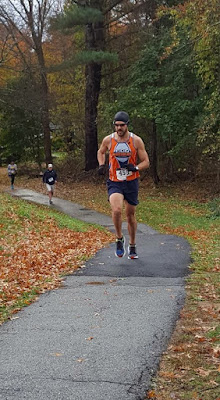 At the end of October I made a last minute decision to run in a local 10k, which almost went right by our house. It was a two-loop course with both a 5k and a 10k (10k a double loop). I was in the lead from the start and soon after the start of loop #2 a volunteer told me to take a right turn. The first loop hadn't had this turn and I thought she was wrong (I've had two races in the past where volunteers have been misguided and directed me off course). I decided to stay straight and run the same as the first loop. However, at the next mile marker I was 1/10 short, and realized I had missed a short out and back. I continued on and finished short of 10k in 36:35. If I had run the correct course I would have been a hair over 37:00. I talked with the RD, who I know, and is a local runner. I was DQ'd as a result of 'cutting' the course - a bit bummed as I should have listened to the volunteer.
Next up? I had been thinking about a half marathon in a few weeks, but I'm thinking that with only running around 35-40 MPW that I'd probably feel quite crappy and it wouldn't be a fun experience - slogging through a race when not in shape doesn't sound fun. Therefore, I'm planning on doing a 5k on Thanksgiving day when we are on Nantucket visiting my folks. It's a course I've run dozens of times and think that something around 18:00 or a bit higher would be realistic. I've been doing a little track work on Wednesday afternoons to work on my speed. I've also agreed to be part of a 5-person 27 mile race (Mill Cities Relay) in a few weeks time. I'll be running a 5.75 mile leg, and our team is aiming for a time of around 2:40. 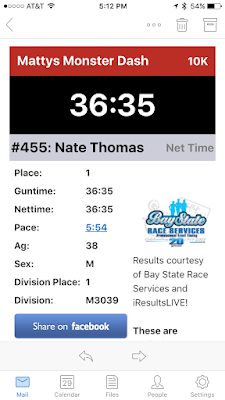 Taking a look back at the triathlon season, I have mixed emotions. I feel like I had my best fitness yet, continuing to build on the previous three seasons when I was coached. I used what I learned while being coached to tailor my workouts around my daily life, and it seemed to work very well. I had a successful first race of the season at Florida 70.3 in April with a PR of 4:26, and I followed that up with another PR at the Patriot Half in June in 4:21. I was on track to have my best race of the season at Timberman, but a flat ended the day. The season culminated with a somewhat disappointing result at Pumpkinman, when the race was canceled due to a huge thunderstorm. I ended up finishing up 3rd overall there, but would have been around 4:15 if the race had continued.

Looking towards next season, I'm leaning towards racing Eagleman 70.3 to start the tri season in early June, with the goal of securing a slot to the WC in Chattanooga in September. I would probably do one or two shorter races over the summer. Fitting in the training volume from previous years won't be possible, so I'll be creative in fitting workouts in, and I'll probably end up doing more quality workouts and less 'base' mileage. I'm thinking of something like alternating bigger run and bike weeks - 6 hours biking and 4 hours running, then flip the next week to 4 hours biking and 6 hours running. Two swims a week is all I could fit in during the school year. Over the summer I could probably squeeze in an early morning swim at Walden Pond once a week. We'll see how it turns out!