I went into Pumpkinman a bit bitter after my DNF at Timberman and felt like I had some good fitness to set a nice PR. I was up a bit after 3 AM and on the road around 4 AM for the hour and twenty minute drive to southern Maine. The weather forecast was a mixed bag. It was going to be relatively warm and very humid - good for a fast bike time, but not the best for the run.

I was racing the Elite wave and thought I might have an outside shot at third, which would be a $250 prize. I had found out just a few days before the race that Lucas Pozzetta, a friend who won this race last year, going sub 4:00 in his first HIM, was racing. A few other faster folks (Doug MacLean, Robert Hollinger, Ray Botehlo) were racing, so I knew I'd have to have a solid day to make the podium. 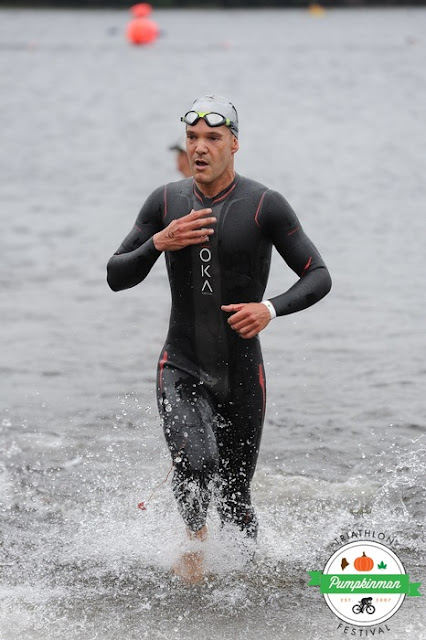 The race began with a two loop swim in a small pond. Right away a small pack pulled away and Lucas pulled away from them, swimming a 23. I was on my own for the whole swim, but feel I did my best job of sighting this season. When I stood up just before the swim exit and saw something like 30:50 on the clock I was psyched. The official swim was 31:03, a PR by around 30 seconds from the WC at Tremblant a couple of years ago.

The next part sucked - a steep hill climb to transition. I decided to take the wetsuit off before the climb, so my 'hill climb' time wasn't great. However, I was out and on the bike with just over 33 minutes on the race clock. Goal one complete!

The bike course is a mix of recently paved roads along with some pretty crappy sections. Using 85% of FTP, Best Bike Split had me right around 2:09 for a bike split on the slightly short (just under 55 miles) course. I settled in and was feeling pretty solid, starting a bit below goal wattage, and building for the first half hour. My HR was still quite high, as it usually is for the first several miles on the bike, but eventually settled into the mid to low 150's.

The course goes out and does two loops before returning to transition. Each of these two outer loops has two decent climbs followed by equal downhill sections. The end of the bike course is mostly downhill, helping to gain back a little time and speed. After an hour or so I was sitting right at 282 watts, which was what I was shooting for. However, around 1:15 into the bike I reached for my rear water bottle only to realize I'd lost it, probably on some of the crappy road. I was out of water except for my concentrated bottle of Infinit. I knew there was at least 15 or more minutes before the next aid station, so I dialed things down a bit as a result. Looking below, that was right around Lap #8 (I do laps every 4 miles in races) - after that point the watts dropped a bit. I was able to get another bottle with around 35 minutes left in the ride, but I knew I was probably going to come off the bike a bit dehydrated. I had left a full water bottle in transition, and the plan was to run out with that. At the end of the ride I finished with a split of just over 2:10 on 272 watts - my 4th 70.3 this race and all have been at 272 AP! I guess that's consistency - splits have been 2:10 - 2:15 on those watts. 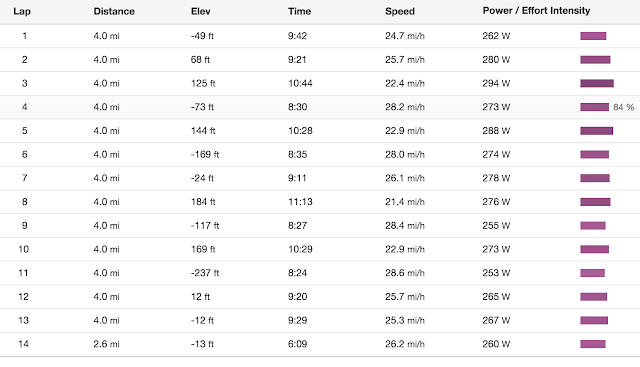 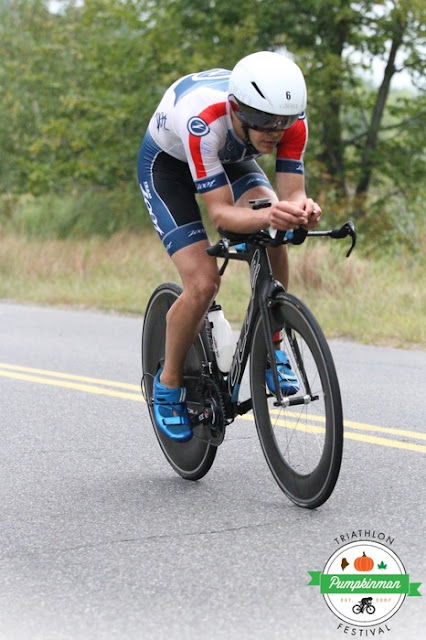 I knew I was in 5th coming off the bike and that three of the four guys ahead of me could probably run faster. Just as I was coming into T2 Robert Hollinger and Tim Russell were heading out - about 2'30" ahead of me. Robert was top amateur at Timberman a few weeks earlier and ran a 1:18 here last year - no chance of catching him. Tim was my goal. I wasn't sure where Ray was, but saw him walking back to transition within my first mile.

That first mile clicked by in 6:43, right where I wanted to ease into things. Then suddenly, and with no warning, the whole inside of my right leg seized up. It was like it had turned into a log - loosing that bottle on the bike probably didn't help! I stopped for around 15-20 seconds trying to massage it, then began walking gingerly. After a minute or so, I eased into an uncomfortable jog, and within another minute or two was back around my goal pace of 6:30-6:40. However, it cost me quite a bit, and that second mile was a 7:44 - yikes!!!!

I was able to get the average pace back under 7:00 and passed Tim Russell somewhere around the five mile mark. Soon after that was the turn around for the two loops and I saw Doug MacLean, who had been around 5 min behind me off the bike. It looked like he'd cut maybe two minutes into me over 6 miles or so. I was confident that things were turning around, though. I was feeling much better and was feeling like a solid negative split run (like Patriot earlier in the year) was in the cards. However, moments later the heavens opened up, the wind began to howl and a crazy-ass thunderstorm arrived. A minute or so later I learned that the race had been cancelled. It was probably the right call as there were decent sized tree limbs coming down and in the road. Many folks were still out on the bike course, and I couldn't imagine what that would be like.

Making the pass from 4th into 3rd a bit before Mother Nature got angry: 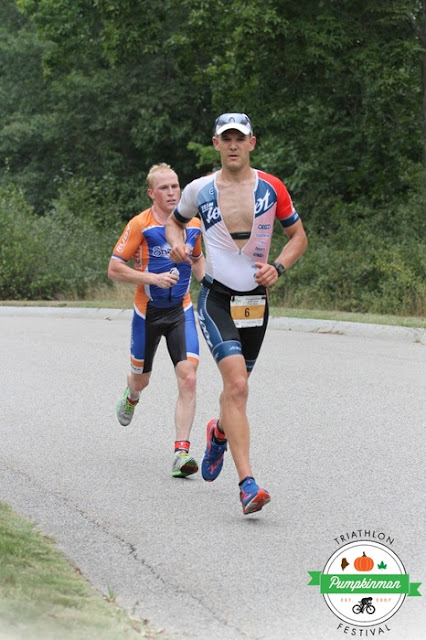 I soon got a ride back to transition from Kurt Perham, a local tri and bike coach, and found out that results would be based on aqua-bike times. As I was in 5th at that point I grabbed a bit of food and headed home. Later in the day Lucas, who had been in the lead at the time of the cancellation, let me know that results for the Elite wave had been decided to be based on placement on course during the run when the race was called. That meant I was given 3rd and $250 - my first winnings in a triathlon - yeah for me!!

I'll take that, but really wish that mother nature hadn't shown up. I'm pretty sure I would have been able to hold onto 3rd and would have finished with a time of around 4:12, which would have been a nice PR to end the year on.

Next up? Tomorrow Cupkcake is coming to stay! Katie's c-section is in the morning and Jackson will become a big brother! We're psyched after all of the complications that Katie went through to be at the end!

I am signed up for the BAA half marathon on October 9th - not sure how run training will fare with the new addition to the family. I'm toying with the idea of running the Philly Marathon and giving a sub 3:00 a shot. We'll see how the next few weeks go, and maybe if the legs are feeling up to it and the new arrival is a good sleeper, I'll give Philly a go.