Timberman 70.3, my A race of the season, is now just over four weeks away. I've remained injury free (knocking on wood), and training has gone well. I visited my folks on Nantucket last weekend and did the Nantucket Triathlon. This used to be a two-day affair with a sprint on Saturday and an Olympic on Sunday, but they did away with the Sunday race due to dwindling participation. I didn't taper much going into the race, only taking it easy on the Thursday and Friday.

Looking at who was racing, I felt I had a decent chance of winning. However, Beau Garufi was a last minute registrant, and he kicked my butt. I crossed the line in 2nd place, but was in no-mans land for the run. I came off the bike three minutes behind Beau, and about two minutes in front of the guy behind me. However, some younger guy had a smoking fast run from a later wave and beat me for 2nd OA by 5 seconds. It's hard to run fast when there's nobody around, and the lesson was learned (again) that you need to push hard. I easily could have run a bit faster and should have taken 2nd OA, but I finished in 3rd. Either way, it was a fun race. I managed to take the bike course KOM by 2 seconds from Lucas Pozzetta, who set it last year. Here are a few free photos from the race (only bike photo has me in the background coming into T2!). 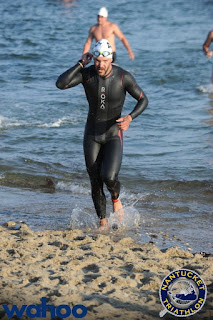 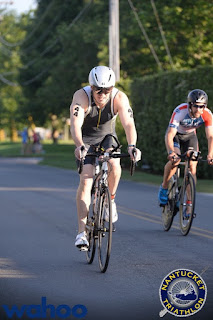 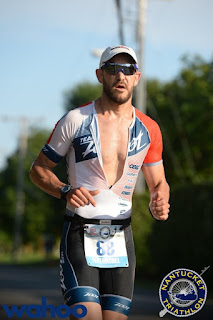 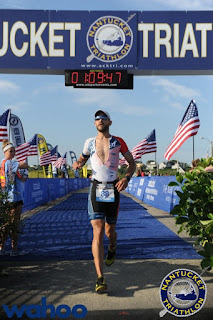 Training has been going well, and one thing I've been doing the last few weeks is a back-to-back hard workout on Wednesday and Thursday. Wednesday has been a track day and Thursday has been intervals on the bike. Yesterday was 3x20' @ 95% on the bike, and I was at 324-327 watts on each one. My HR stayed under 160, which was a good sign. With my power goal at Timberman being around 280, I'm hoping the HR will stay nice and low so I can have a solid run. The Wednesday track workout this week was 3x2 miles a bit quicker than open half pace. The miles all ended up averaging around 5:55 pace.

I have two more bigger weekends, and plan on getting in 3:00 - 3:15 rides w/5 off the bike on Saturdays and runs of 16 and 17 mile runs on the two Sundays. I really feel that I'm capable of being right around 4:20 at Timberman, and maybe sneaking under that time if things go real well. I know there is at least one stud, Matt Migonis (who beat me by 10 minutes at Patriot), who should beat me soundly. The real goal is a 2017 70.3 WC slot, and I feel I'm in that neighborhood.