It's been four days since I competed in the Patriot Half in East Freetown, MA. This race and location is a little sentimental because it was the location of my first tri back in 2011. At that time, the race also included a sprint. I remember finishing up the sprint race and watching some of the lead bikers in the half fly by and trying to imagine what it would take to get there. Fast forward six years, and I was one of those faster bikers, hopefully inspiring some folks just starting out in the sport. 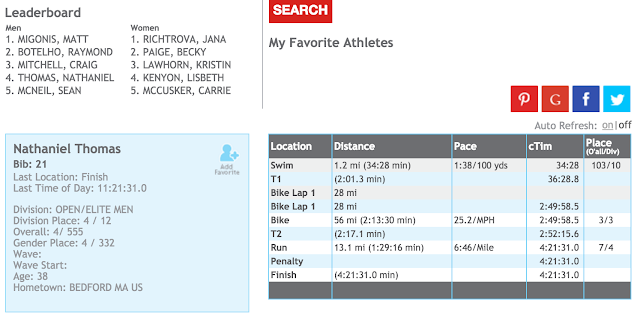 I was definitely hoping for a faster swim and run, but I'll take the PR and move forward. I made the choice to start in the elite wave, secretly hoping to crack the top two, which had prize money ($300 and $200). Being six minutes down out of the water didn't help. I felt like I swam decently in terms of pacing, but my sighting wasn't great, and I kept drifting left a bit. Coming out of the water, I knew I had some work to do. 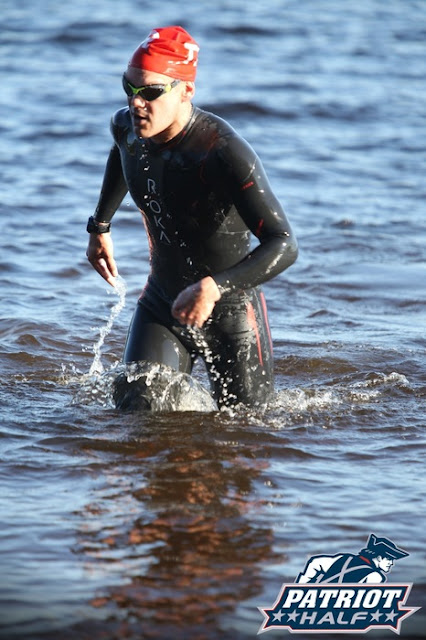 I tried to make T1 pretty fast, but the wetsuit took a bit longer than I would have liked, getting hung up on an ankle. Out onto the bike, I put my head down and targeted wattage around 275-285. My HR remained high for the first 20 or so minutes, then began to settle. I had half a Powerbar stuck on my aero bars, but after taking one bight the rest fell out of my hand on a bump - 100 calories down. I had an 800 calorie bottle of Infinit, so I knew I needed to take it all in, which I was able to do during the bike leg. 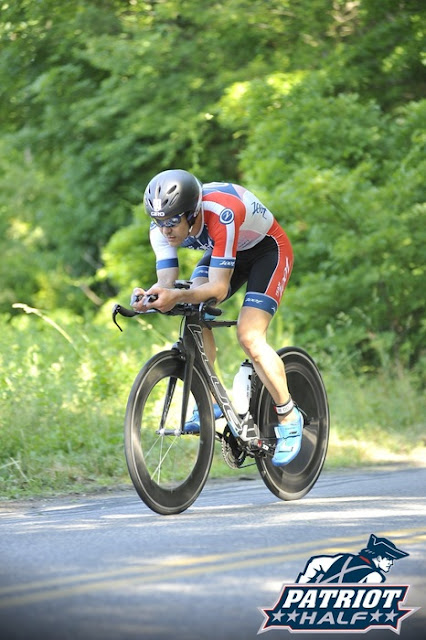 The bike leg at Patriot is two loops, and I went past transition right at 1:06 on my bike computer. At that point I was averaging 282 watts. My HR was back in check, but my legs didn't seem so happy, so I made the decision to back off a bit on lap #2. As a result, my second loop was around 90 seconds slower, and average power came in at 272 watts. However, my legs felt great coming off the bike, and I think backing the power off a bit was the right call. As you can see from the screen shot below, the power dropped a bit around the midway point (Garmin was set to lap every four miles). 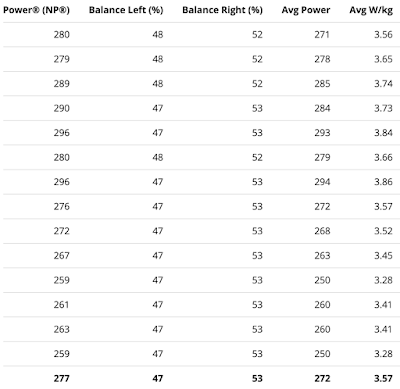 Heading out on the run, I knew I was in third place. I also knew there were some real good runners behind me. These included my Team Zoot teammate Colin Cook and Craig Mitchell from Tri Tech Elite. Within the first mile of the run I began to have a side-stitch on my left side. During the bike I had simply forgotten to take in my SaltStick caps except on one occasion, and I also forgot to grab them coming off the bike - not a good start to the run! Several years ago I had issues with side-stitches and upping the sodium had helped. I remembered that breathing in and out on when the left foot hit the ground was a technique that helped alleviate side-stitches. I began doing this - the side-stitch didn't go away, but the pain lessened a bit. However, my pace wasn't what I wanted - I was hovering around 7:00 pace, far from my goal pace of 6:3x pace.

For several miles I had a battle with my side-stitch. Whenever I forgot to breathe both in and out on my left foot fall the side-stitch would begin to come back. Somewhere around mile 6-7 it seemed to go away for good. It was also around this time that Craig Mitchell caught me. I gave him kudos on the run and he returned the favor on my bike. He slowly pulled away till he had a 100 yard lead, but then I was able to hold that distance. As the miles went by this distance maintained, and I tried pushing a bit more at the end. At the finish, he beat me by 20 seconds. I was definitely happy to have negative split the run and finished feeling strong. I'll definitely make a point of focusing on the sodium intake on both the bike and run at Timberman where the competition will be fighting for those 70.3 slots. Below you can see around the midway point where I began feeling better - pace got a bit quicker and the HR went up as I got the upper hand on the side-stitch. 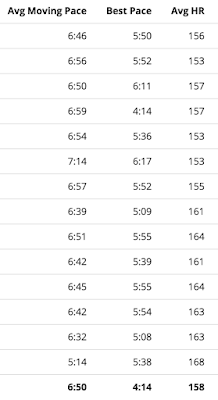 Crossing the finish line, I was excited to have set another PR, but also a bit frustrated with the cramping and self-inflicted damage because of forgetting the SaltSticks. 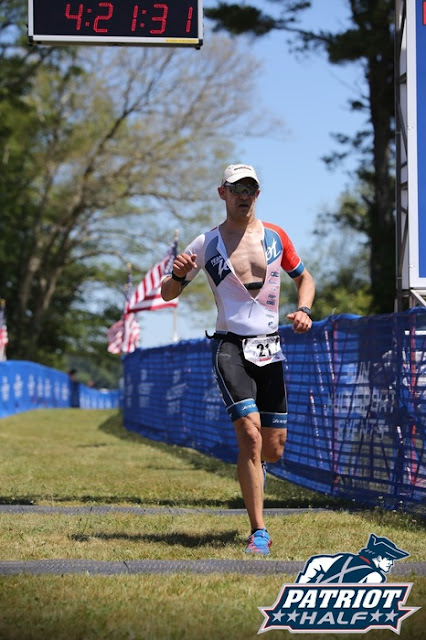 I now have eight weeks until the A race of my season, Timberman 70.3. With the progress I've made this season, I feel that going sub 4:20 is realistic there. I'll need to have a better swim - low 30's, a bike time of 2:15-2:17, and a run in the mid 1:2x range to get it done. The school year is also complete, so I'll have more time to spend both with my family and to get in some solid training. I'm thinking of doing the Nantucket Sprint Tri, which is in mid July, and visit the folks for a few days. There won't be any taper for that race other than a few easier days leading in if I decide to do it. The body is feeling good and recovering well after Patriot - it's time to get back at it and enjoy the summer!