What Could Have Been.......A Long Training Day At Timberman

When you play with fire you sometimes get burned, and my rear tire took the heat! The seatstays on my bike are quite narrow and I knew that going with a 24mm Force rear tire was a bit of a gamble. I messed with the clearance several times prior to the race, trying to get it perfectly centered. However, the tire managed to rub a few times too many (probably on the harder efforts on the hills), resulting in a flat tire just after mile 50. It occurred on a steep downhill, and I was lucky to come to a stop about 2/3 of the way down the hill (just prior to the split for Ellacoya State Park and Gunstuck).

I'm pretty sure that people back at T2 could hear me swear out loud right after it happened! "Ok," I thought, "Get this fixed, and you're still only a few minutes down from where we want to be." However, it wasn't that easy, and it ended up being a little over 40 minutes until I was rolling again.

This season I went from a Powertap rear wheel with a cover to a disc, switching to a Power2Max crank-based power meter and a HED disc rear. I love the new power meter, but one thing I hadn't considered in switching over to the new setup was the length of the valve stem on my replacement tube. My former rear race wheel was a HED 9 with a cover. My front is also a HED 9, so it made sense to carry one spare tube with an extender. I used the same replacement tube as in the past, and I was able to quickly get the extender off the valve, but the valve stem proved to still be to long to get my CO2 chuck into the disc opening to inflate the tire. I cut my finger trying to inflate it and wasted my two CO2's hoping to somehow get a little air into the tire to get back to T2. Standing there I saw all the folks zoom by who I'd passed earlier on.

Eventually, I managed to cross the street after gathering up my stuff (tire levers, wasted CO2's, tube, etc). I got to the bottom of the hill and around the corner there was a bike tech guy right there. Why couldn't I have flatted 1/2 a mile later!! At that point in my head I was done and just wanted to get back to T2. I explained my situation, but he didn't have a crack pipe. After calling a few other folks, he determined someone was a few min down the road with one. He drove off on his scooter and returned in a bit, and was able to stick a spare tube with a short stem in the tire and get it inflated. I made sure to put the wheel in as centered a position as possible, then made my way back to T2.

I had been right on pace for around a 2:14 split, having gone through 50 miles in 2:03 - around 275 watt average at that point. I ended up getting back to Ellacoya State Park with a bike time of just over 2:55. During the spin back to T2 I decided to do one loop of the run course at goal race pace and save my run legs for Pumpkinman in a few weeks time. I took my time in T2, having some water, using the porta-pottie, and then headed out for the run. The run felt real good, and I feel I could have maintained the pace. Honestly, I didn't want my name put with a race time that I felt wasn't my standard, but I also knew the recovery would be much quicker if I didn't put in another hard 43ish min effort to shred the legs.

Here is my timing info after finishing the first lap of the run: 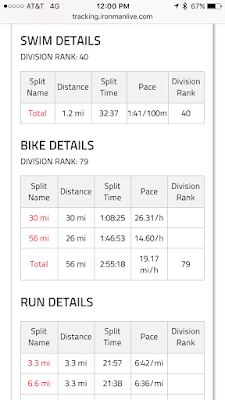 After finishing the first loop I took off my timing chip and returned it to a volunteer near the finish line. Inside, I was upset, but knew there was nothing to be done except move on and learn from my mistake. I'll be putting a 23mm Conti 4000S back on the rear, as it has a bit more clearance. It's not quite as fast as the Force, but it will give me more peace of mind.

I'll take the frustration and put it towards Pumpkinman, which is a course that's a good bit faster than Timberman. Best Bike Split had me at 2:14 for Timberman, and has me just under 2:10 at Pumpkinman. My goal there is going sub 4:15.

Training over the next few weeks will ramp up a bit more than planned. My plan had been to take a pretty easy recovery week, then put in a 13 hour week, then a 9-10 hour week leading into Pumpkinman. I honestly feel fine and my legs have a typical bigger training weekend feel to them. I'm taking today (Monday) off, but plan to ramp things up pretty quickly. Tomorrow will be the regular swim and run, run with some race pace on Wednesday, and some sweet-spot work on Thursday. I'll do around a 3 hour ride on Saturday and 14-15 miles on Sunday and see how the body is feeling at that point going into the last two weeks before Pumpkinman.

On the baby front, Katie is quickly approaching the due date! 'Cupcake,' as Jackson refers to him/her (we don't know the gender), is due to arrive on September 23rd. However, with Katie's complications, we have a c-section scheduled for September 16th. If Cupcake decides to come a bit early I may not be doing Pumpkinman, but that would be perfectly fine with me!!