Ironman Tremblant is now six weeks from tomorrow, and I'm feeling quite strong. I just finished my longest ride of the year on Mount Desert Island, ME. The ride was 5 1/2 hrs, 110 miles and had 8,500 ft of climbing, including going up Mt. Cadillac, and was followed by a short 30 min transition run. I was on the bike at 4:50 am, and able to avoid most traffic. This was my third 100+ mile ride, and I have two more 5:30 rides scheduled leading to IMMT. Both of those rides will be done at home, and should have a lot less elevation! 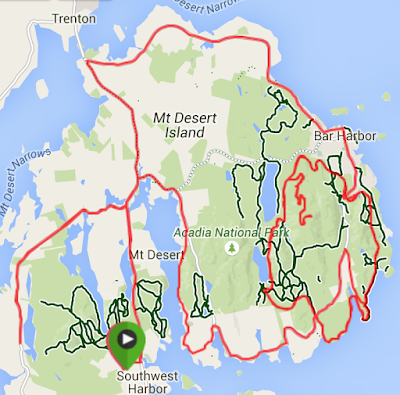 As I was nearing the in-laws house I was a few minutes short of 5:30 for the ride, and decided to do a very short out-and-back. Turning around on a hill, I somehow managed to end up falling on my left side, having lost momentum. No real damage was done, save for a little lost skin. At least there was no traffic and I don't think my graceful fall was witnessed!

I'm very happy to say that my Achilles seems to be back to normal (knocking on wood!). After getting the three EPAT treatments in May and June I eased back into running, and have been able to get in two longer runs over the past two weeks. The run on Sunday of last weekend was done in the basement on our treadmill due to real nasty weather, and I was able to knock out 14.3 miles in 1:45 with zero pain. Tomorrow I have a 1:50 run after an easy hour on the bike. This run will be done in a portion of Acadia Nat'l Park, and goes along some very picturesque shoreline areas.

My swim still needs a bit more work over the next several weeks. There are times in the pool where it seems to click and I can knock out some good sets, and other days I feel very 'blah.' I had a decent OWS yesterday morning in Echo Lake, getting in about 4000 yards in 1:01 - two loons welcomed me to the lake! (It's hard to make out the 2nd one - right where the tree shadows meet the water) I think that with some quality swimming over the next month I should be able to have a similar swim to IMMT in 2013, where I swam 1:06. Coach Colin feels that my swim is fine and that putting in the extra time in the water wouldn't be worth it - that time should be spent on the bike or run. 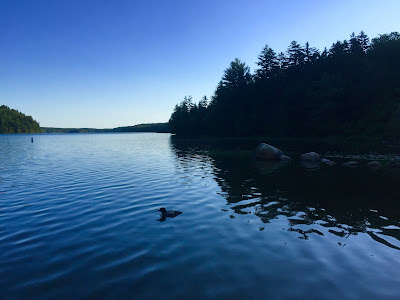 Baring any further setbacks on the run, I feel that if I can execute a strong race at IMMT. With good conditions, I know that a sub 5:00 bike is realistic, and I should be able to have a much better run than two years ago, when I didn't take in any nutrition for the first 7 miles of the run. I'm working with a nutritionist, and feel that I now have a plan for the run. In previous years, I kind of 'winged it' on the run, but that doesn't fly at longer distances. I'll be using the on-course nutrition for the bike and Cliff Blocks and gels on the run. I just need to execute the training leading in to IMMT and I know good things will happen!

I want to acknowledge that my training has been very hard on Katie and Jackson. She allows me to put in the training hours and be away from home for long hours on the weekends. I'm really looking forward to when the season ends and I can sleep in and spend weekend hours with the family. However, it would be kind of nice if the season didn't end until mid October ;) If I do qualify for Kona, I'm thinking that the training won't be as intense, especially with the school year beginning two weeks after Tremblant.

Katie, Jackson, and I are heading off to France a few days after Tremblant to visit 'Uncle Ted.' We have a 12-hr layover in Dublin, which should be fun. We fly in to Barcelona, and will be away for a week. We are really looking forward to this trip right before the school year begins again.

I'll end with two pictures - one, a gorgeous view on a hike Katie and I did up in Acadia, and another of Jackson with a yet-to-be-determined superhero name - any ideas??? 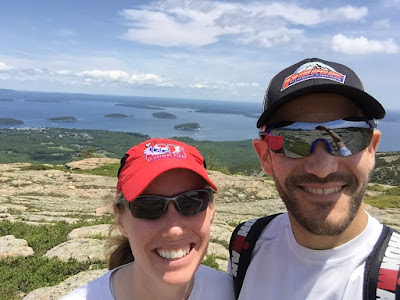 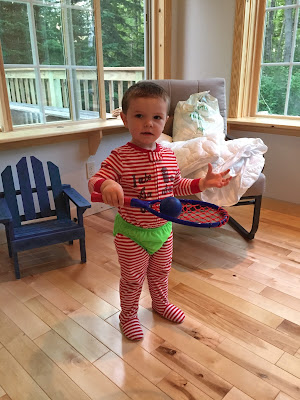