It's now April, and tri season is rapidly approaching. The crazy amount of snow that we accumulated over the winter is finally beginning to recede and the thought of actually riding a bike outside is no longer a wishful thought. My run fitness is slowly beginning to return after the long bout of ITBS I had last season. It's not quite back to where it was two years ago, but the goal is to get there within a few months.

The two main races of 2015 will be the Quassy Half on June 7th (which is now run by Challenge), and IM Mont Tremblant on August 15th. Quassy is a challenging course with lots of hills, and it will be a good test of my overall fitness in a little over two months. I will also be racing the same weekend double (sprint & Olympic) on Nantucket that I did last year in mid July. Several teammates will also be heading out to the island, and it will be fun to be racing on home-soil.

My overall goal for the season is quite simple - get a spot for Kona at IMMT. However, I really feel that I have a shot at an AG win there, and will be gunning for the top spot. Based on my bike time at the 70.3 WC at Tremblant (2:18), I feel that I can go well under 5:00 on the bike course and back it up with a solid run.

I've done a few recent events that have tested the fitness I've worked on since I began working with Peak Tri Coaching in January. Colin has given me quite a bit more biking than I'm accustomed to at this time of the year, but it has paid off, as I feel that I'm stronger than I've been at this point in previous seasons.

Three weeks ago my run training was put to the test when I ran a half marathon in New Bedford. This race is notoriously fast, with close to 200 runners each year running under 1:20. I knew I wasn't quite in 1:20 shape, but figured I could aim for a 6:12-6:15 pace. As it turned out, I finished in just over 1:23. A headwind over the last 3-4 miles derailed my chances of finishing around 1:22. Given what happened at this race last year (ITBS flared up and I didn't even finish), it was a step in the right direction, with room for improvement over the next few months.

My bike improvement was shown recently at the TriMania event, held at MIT, where I came in 2nd overall in the 10k indoor TT. The heat I was in also had Julie Dibens, who was the key note speaker at the convention. I was hoping I could beat her, and it came down to an uphill sprint finish, where I eeked out a .02 second win in the heat. At the end of the day I was beaten by 15 seconds by a rider in the final heat. My power was also higher than in previous years at this event. 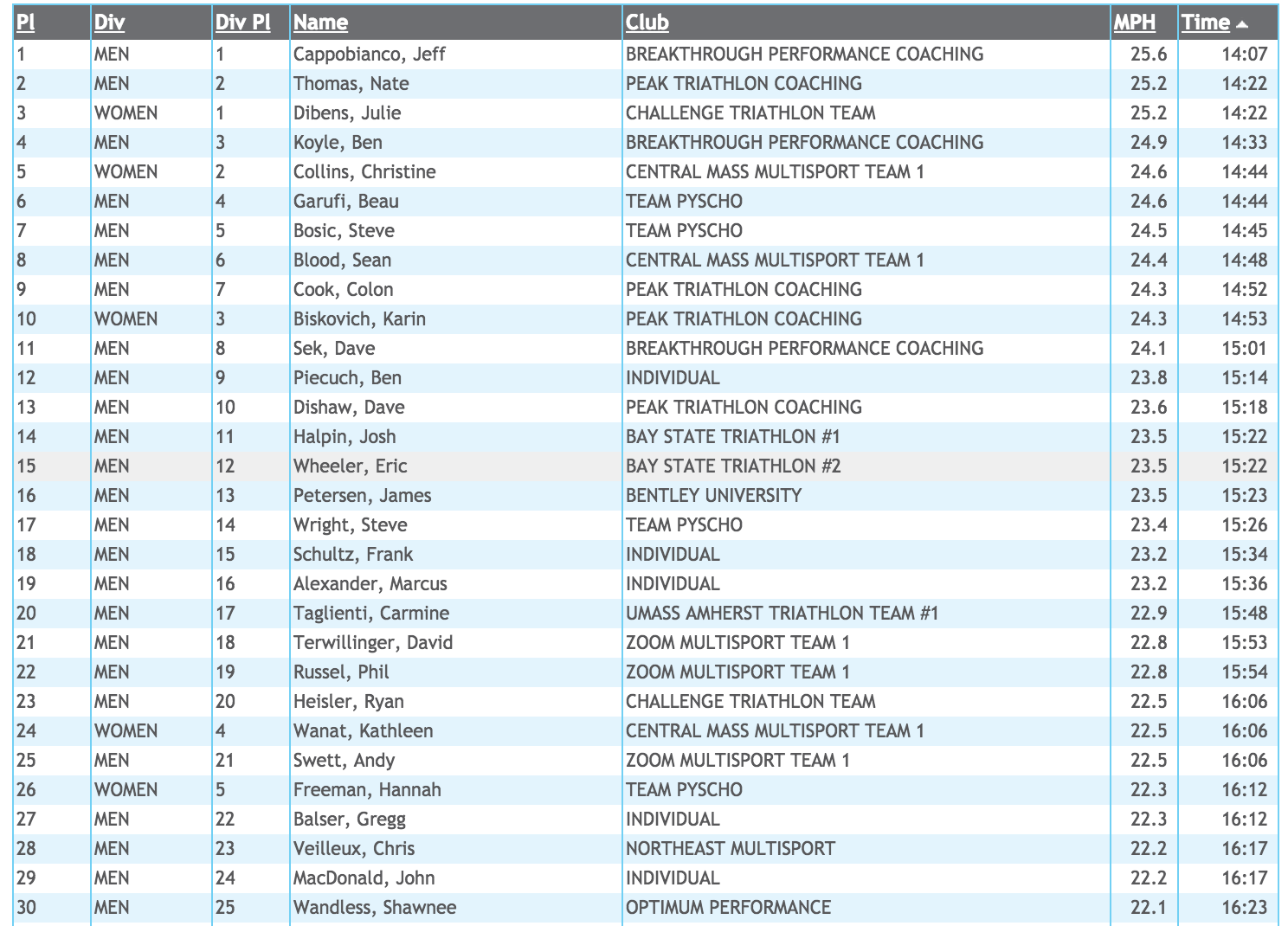 Colin, Julie, Me, Dave & Karin after our heat: 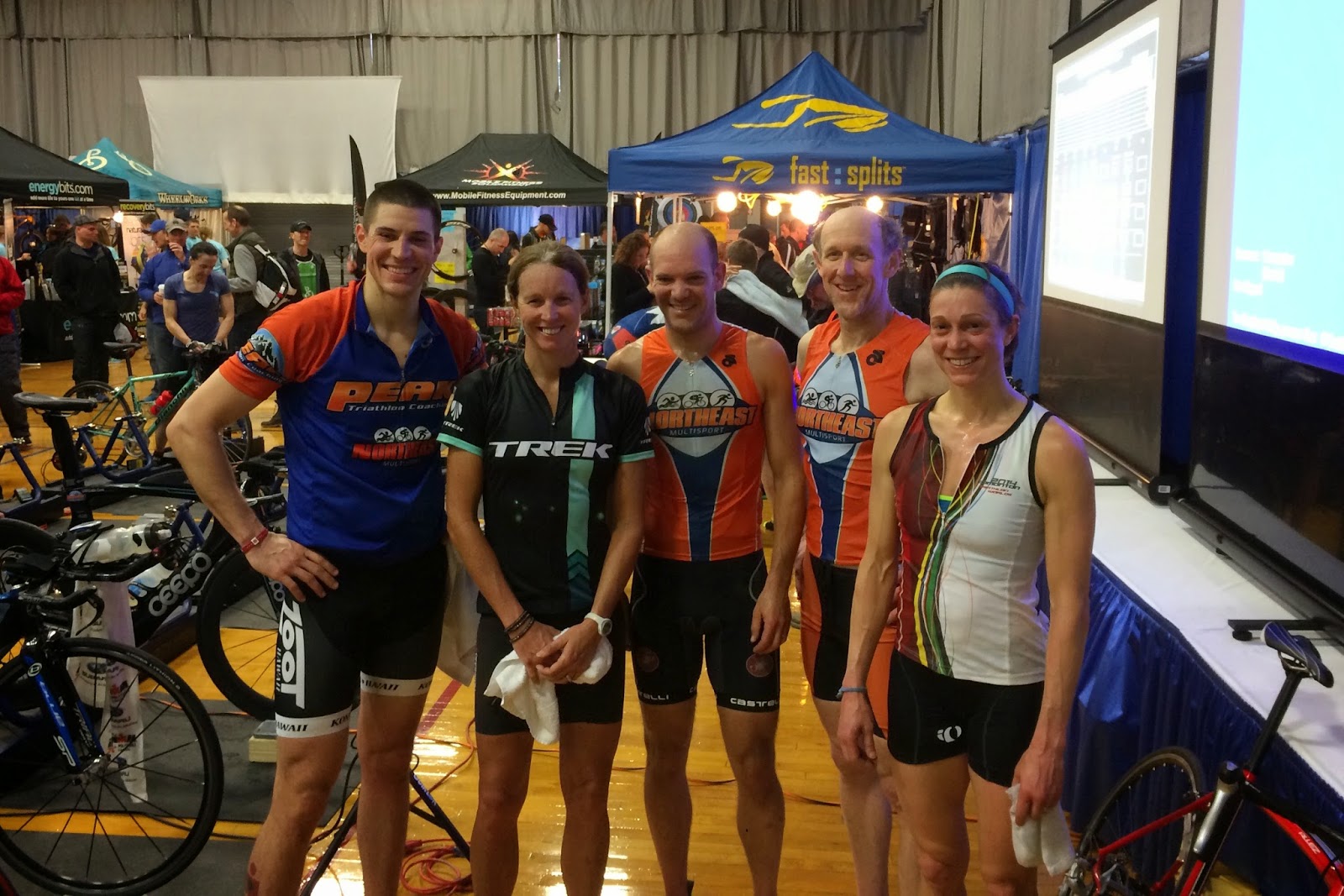 A day after the Multisport Expo Katie and I headed down to the south shore to Cohasset to run a 10k that we've done several times. Although a pretty hilly course (nearly 300 ft of elevation), it's the course I set my 10k PR on a few years ago. My goal was to set a PR, but a slightly different one. I was running with our little guy Jackson (who just turned 2) in the Chariot, and the goal was to break 40 min.

Heading into the race I e-mailed the RD, checking if a running stroller was ok. She was cool with it and on race day I headed to the front, but all the way off to one side. I got quite a few 'looks' from other runners, but knew times from previous years warranted starting near the front. As usual at the start of any road race, about half the runners in the front went out far too hard. At the .5 mile mark I had close to 100 people in front of me. By mile 2 I'd passed 70 or so of them, often getting a double look as Jackson and I went on by.

A bit after the half way point of the race the course swings inland and has a series of little punchy up and downs. I quickly realized that pushing close to 50 pounds pretty much sucked on the up hill sections. On the downhills all I could do was hang on, hitting 4:30 pace on some downhills. In the end, we nearly went under 39 min, finishing in 39:07, good for 15th overall. Without the stroller I feel I would have come pretty close to my PR of 36:34 from a few years ago. Still, it's a stroller PR! 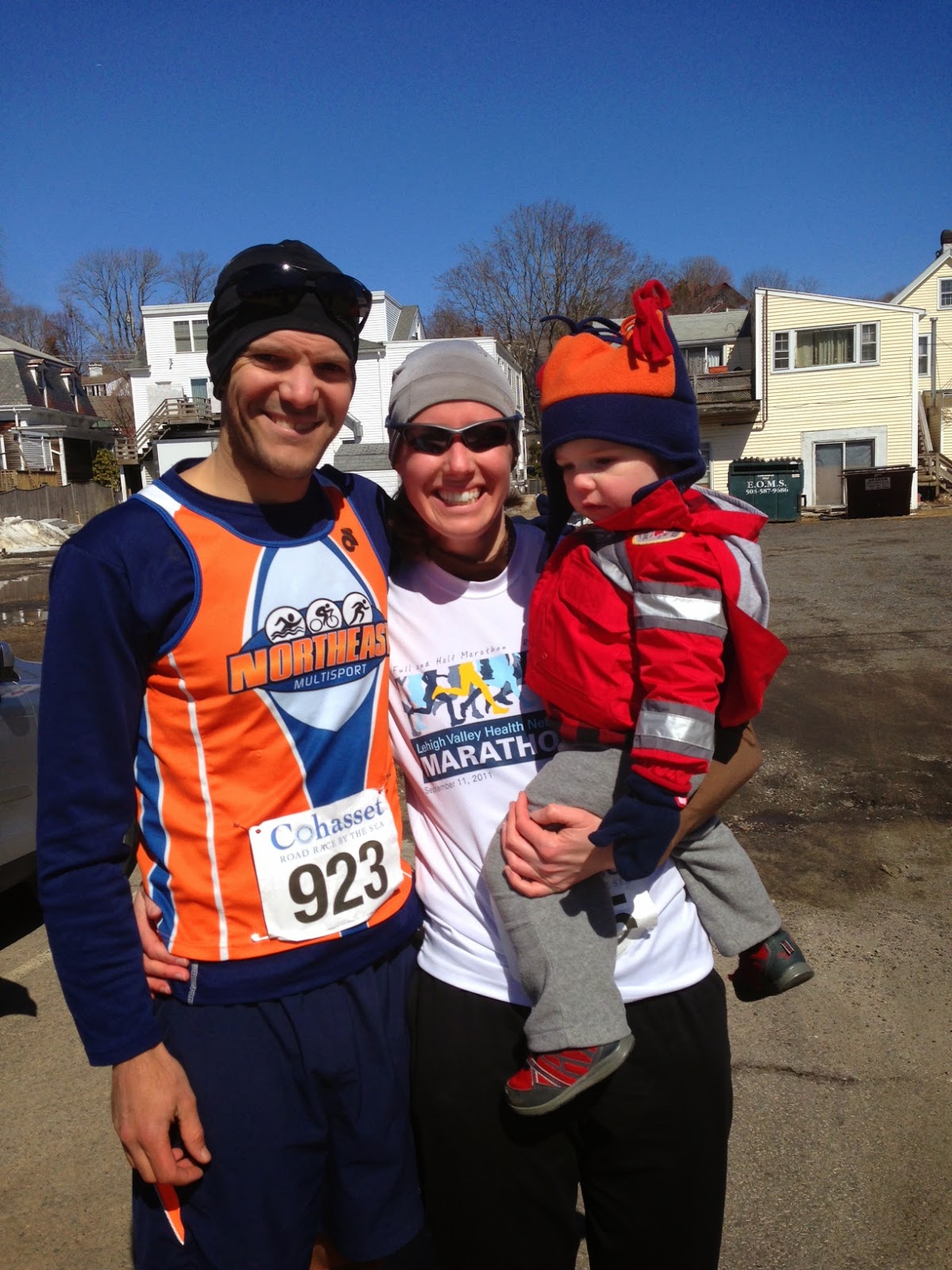 Between now and Quassy my sole focus is increasing my overall fitness. My swim isn't where it needs to be, but with the school year winding down, I'll be able to increase my two swims per week to three or more. I have high hopes for this season and look forward to what I can accomplish.