This year was one of frustration, learning and patience. After last season's failure of qualifying for Kona I had high hopes for 2014. I had put my plans for Kona on the back-burner and would focus on two key races: the Boston Marathon and 70.3 World Champs. The first race ended with many painful miles of walking to finish and the second finished quite well considering how the rest of the year had gone.

I felt that given my improved fitness last year that I could have a good result at Boston, hopefully close to 2:50. Training, which began in December, was promising. Coach Steve had me doing some workouts that included long runs with several 5k's in the middle, and I was hitting those in around 19:30. The pace felt hard, but sustainable. However, on a long run in February things came to a crushing halt.

I was on a portion of the course in Wellesley, when my left knee began to hurt. Initially, I brushed it off as one of those strange pains that seem to come and go while running every once and a while. However, after a couple miles it was getting painfully obvious that this wasn't going away. I began to walk, realizing that it was my IT Band that was the culprit. I'd had some ITB issues about four years ago, but this seemed to come from nowhere. Mileage was lower than for previous marathons, but my body wasn't happy with how I was running.

Over the next several weeks I began doing some strengthening exercises and also started to see a chiropractor for Graston and ART. Without running the leg felt fine, but when I did try to run things would start to hurt after around 40 minutes. I played with doing two shorter runs a day, but the pain persisted. As the marathon got closer I decided to try a cortisone shot, as I felt there wasn't much else to do. The shot helped a bit, but it only got me to around mile 14 before the pain returned. The last 9-10 miles of the race were pretty ugly, as I walked from the 95 overpass to Boylston St, attempting to run several times, but only making it a few hundred yards at a time. For those who have had ITBS, you know the pain. If you haven't experienced it, an easy way to picture it is having a sharp object stab into your leg with each step - fun times! Here I am saying bye to Katie and Jackson around mile 15 - it would be walking most of the way after this. 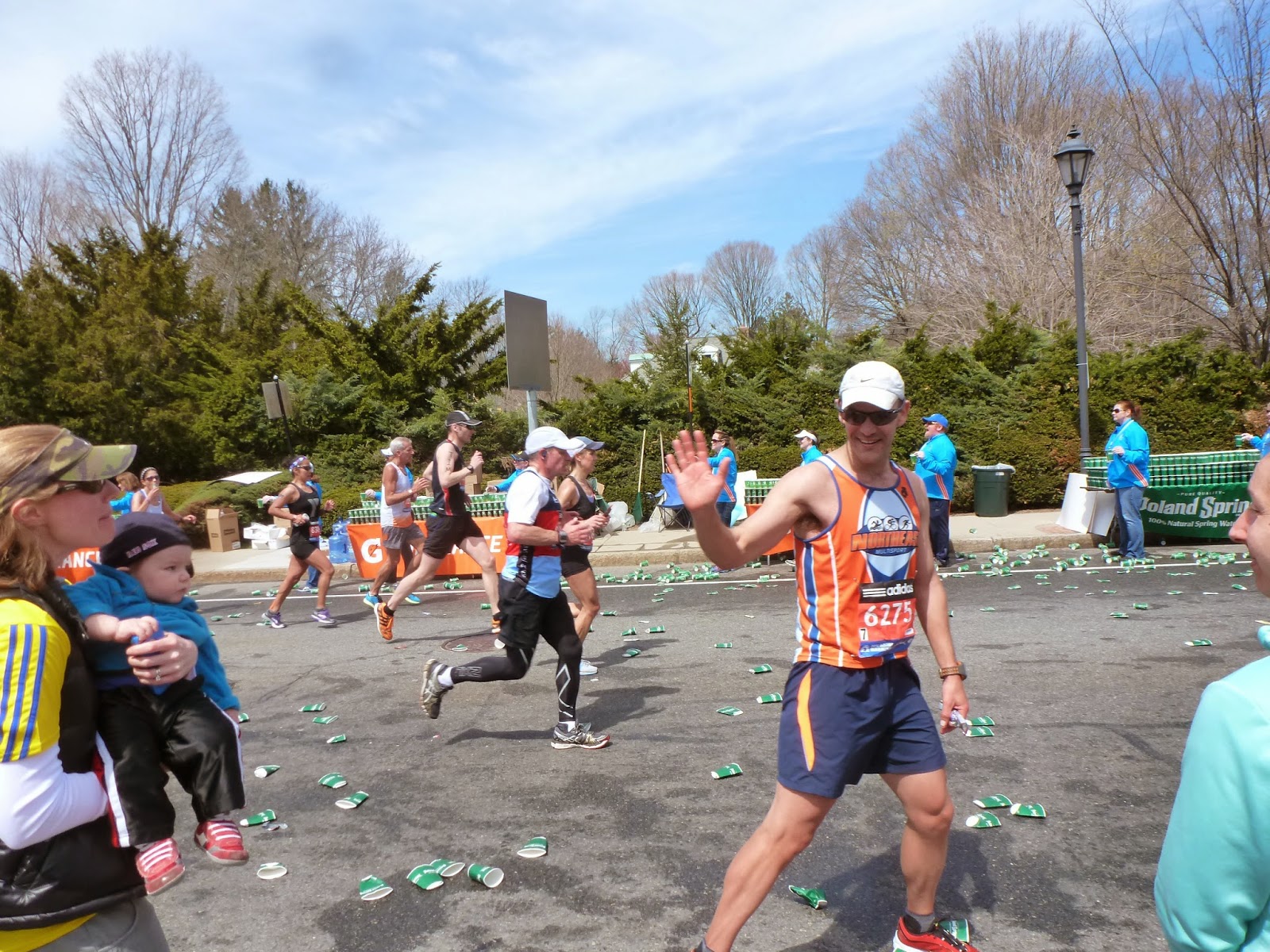 I was frustrated, and honestly didn't know what to do. After the race I took a good chunk of time off from running and tried to focus on getting my hips and glutes stronger. I also began seeing a PT instead of the chiropractor. My first triathlon didn't take place until mid July when I was on Nantucket visiting my folks. I did a sprint and an Olympic back-to-back and ran the farthest I'd run since February in once session! I only had some mild pain and felt a little hopeful.

As the rest of the summer progressed I was still optimistic. The Olympic on Nantucket gave me hope that things would get better. At the same time I was a bit depressed, and every time I saw someone running I felt a bit jealous. As mid August rolled around I was planning on racing Timberman in NH. Going into the race my longest run was 8 miles the weekend prior, and my leg hurt for the last three miles. However, on race day things went relatively well. I had a decent swim and bike and my leg only hurt mildly during the race. Of course, my pace was much slower than in the past simply due to a lack of speed and endurance - duh!

Three weeks after Timberman was the 70.3 Worlds in Tremblant. It was my third time racing at Tremblant, and I had renewed confidence after Timberman. I got in a little training between races, then Katie, Jackson & I headed up to Quebec just a week after school began (using my two personal days for the school year up in the first week!).

Race day came, and I feel things went as well as they could considering my injury and lack of training throughout the year. I had splits of 31, 2:18 and 1:33 for a 4:30 finish. Going into the year my goal was a top 25 finish in my AG - that would have meant a time of around 4:20. What if's are hard to back up, but I felt I could have been quite close to that time if the year had gone well. Here's the bike racked and ready to roll. 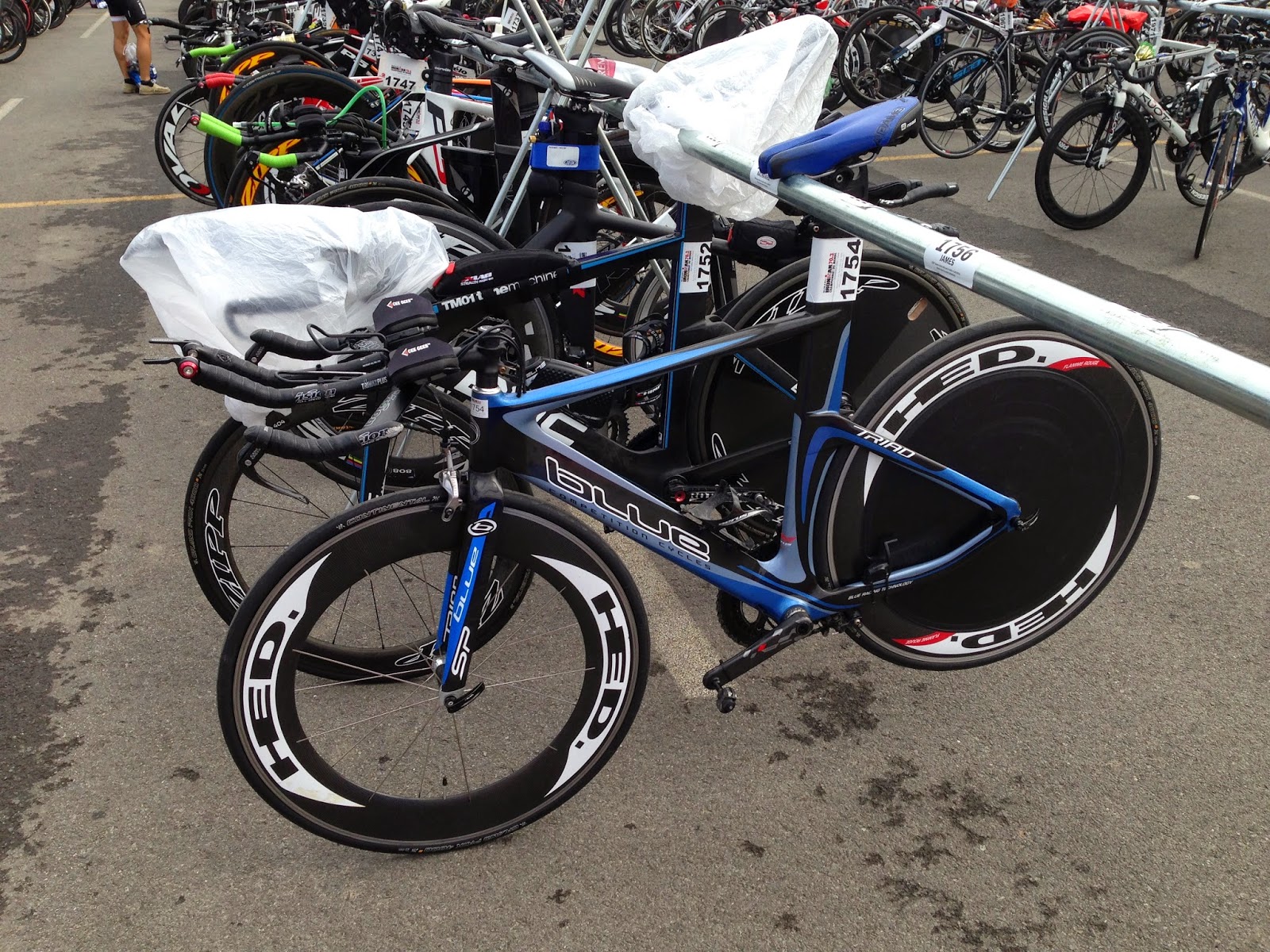 I feel that injuries are a time of reflection, and a time to learn something knew. In this case, I learned that my body has limitations and that I need to listen to what my body is telling me a bit more carefully. As I get older I'm realizing that it's probably a sensible idea to mix in some specific strength exercises a few times a week to target certain areas. I plan on trying to also do one yoga session each week to work a bit more on flexibility and core strength.

After Tremblant my sights were set on another race six weeks later, the Marine Corps Maraton in VA. It was to be Katie's first marathon, and my 5th. I wrote up a 18 week training plan for her, peaking with around 45 miles and two long runs of 2:40 or so in duration. I felt that she had a chance to run under 4 hours, but that pacing would be important.

In next six weeks I managed to get in a bit more run volume, and the IT Band finally seemed to start responding to my persistent strength exercises. I was able to get in around 35-40 miles a week for four weeks, including a long run of 15+ miles. I was honestly a bit more worried about getting through the marathon than for Katie to finish in a good time.

The race was to be our first night away from Jackson, and it was a little hard for Katie. We had contemplated taking Jackson and having him stay with friends in Alexandria for the day, but we are happy that we decided to have him stay at home. On race morning we were up early, and were bussed to the start near the Pentagon. We ended up being a little rushed and had to jog to the start to be on time. The race went as well as it could have, and Katie finished in 3:56. Below are the splits for the day - we actually negatively split the race. This was undoubtedly my proudest moment of the year. I can see why coaches get excited when their athletes are successful! 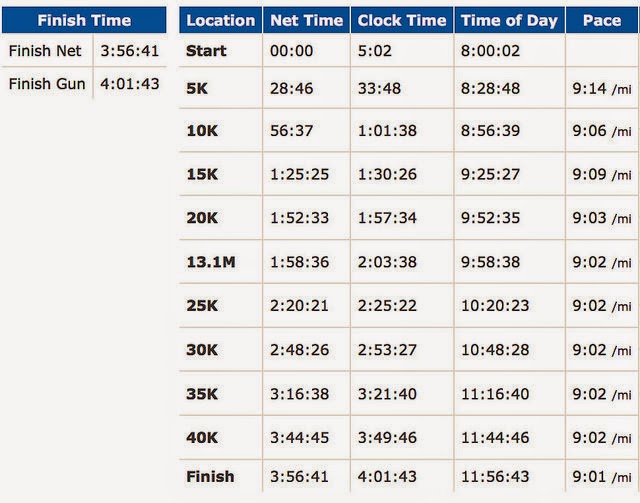 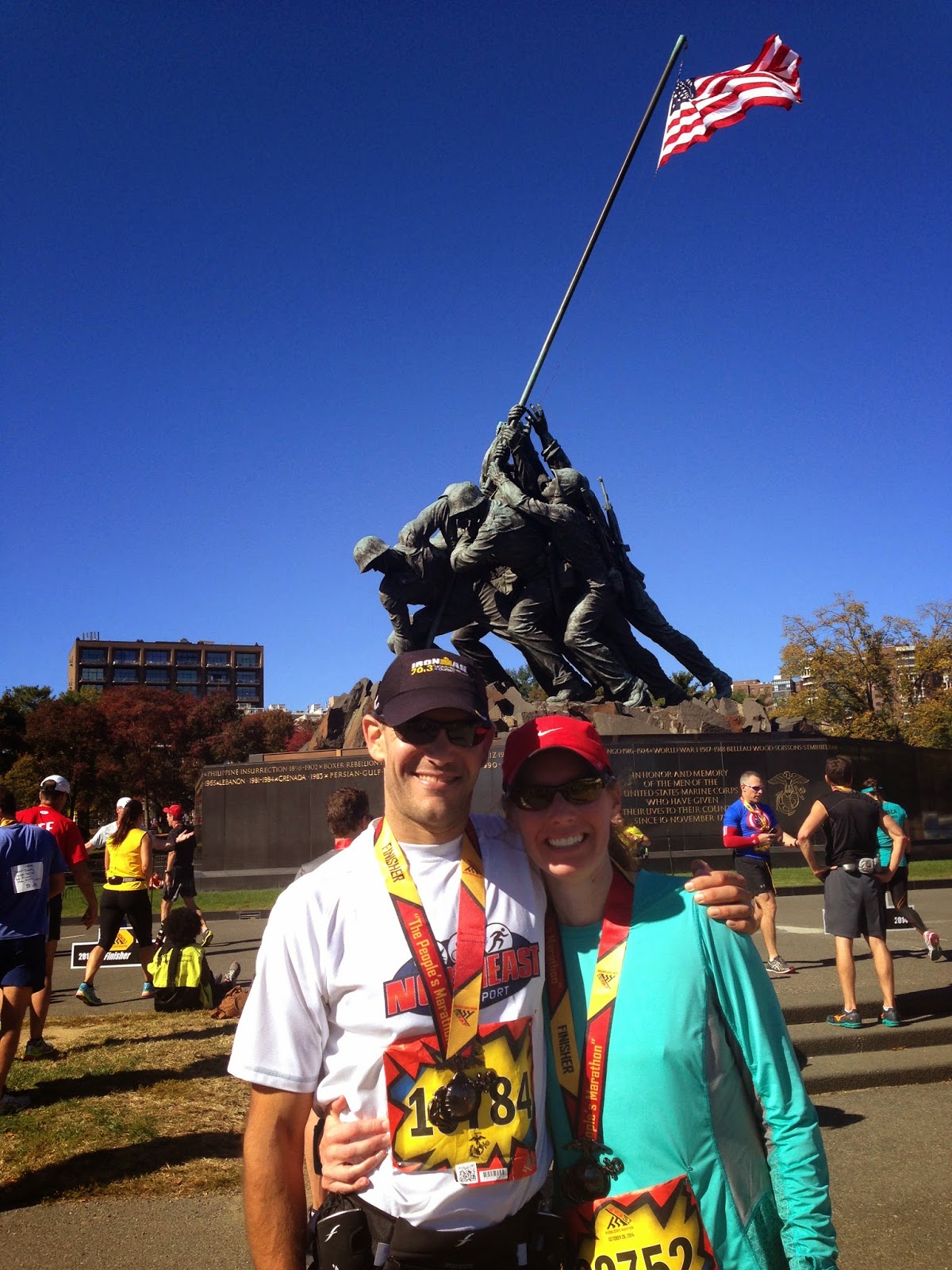 Since the end of October training has been pretty minimal, trying to let my injury get 100% better. I averaged around 5-6 hours a week for November, and have only recently gotten up to around 8 hrs a week. In January I'll start working with my good friend Colin Cook at Peak Tri Coaching. Over the past few years Colin has taken his own racing to an elite level, and I want a piece of that. He is also coaching a number of athletes on Northeast Multisport, my tri team, and many have set PR's under his guidance. I'm looking forward to being under his tutelage in 2015.

Back in July we bought a new house, and we moved in right after the Marine Corps Marathon. We put on an addition, redid the kitchen, refinished all the floors, and repainted most of the house. Of course, the project took around five weeks longer than 'estimated' by our GC, but everything turned out ok in the end. One of the things I was psyched about was having the space to set up a workout area that could be permanent. Here is a shot of what I've got so far. 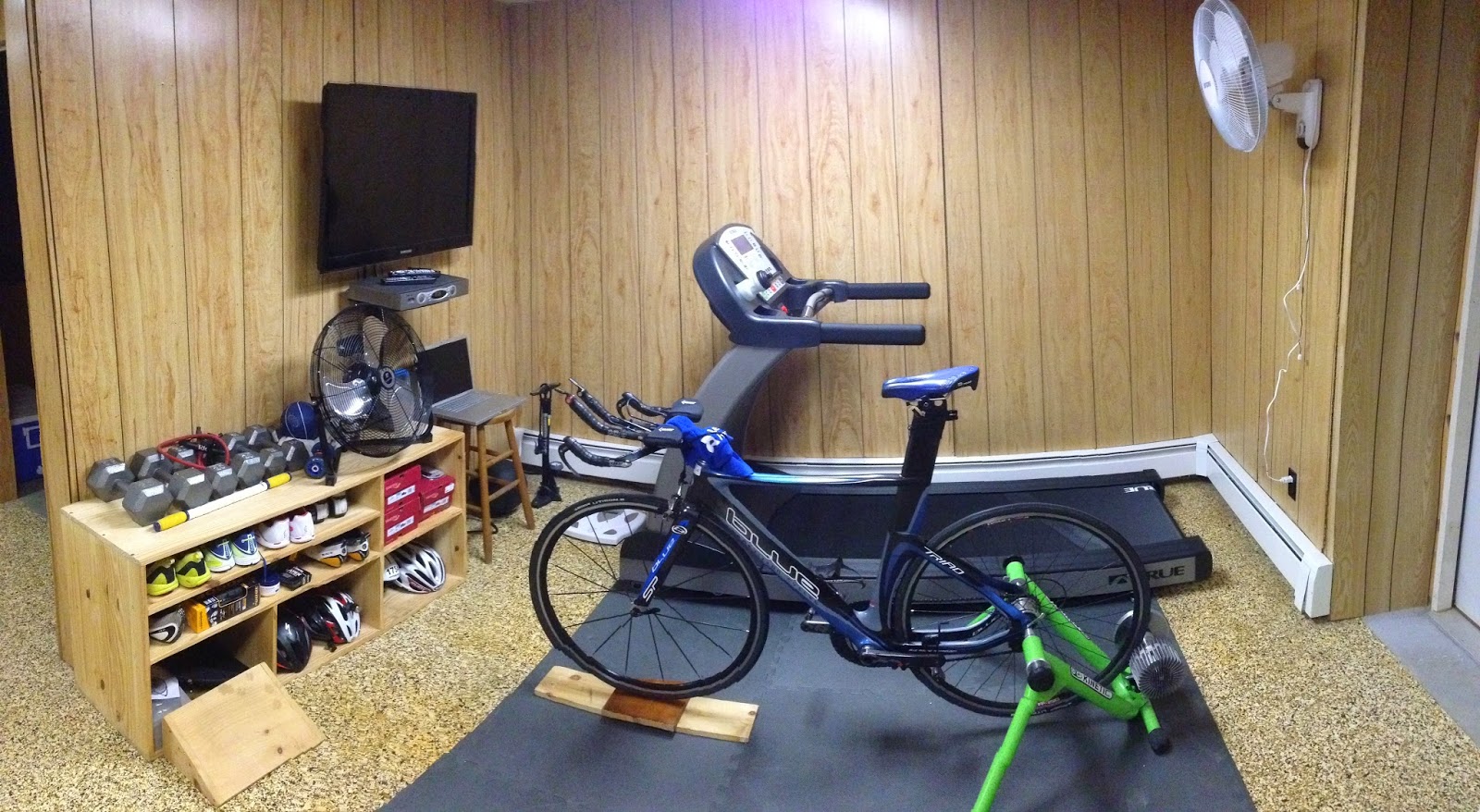 The treadmill is new and has already come in handy on some nasty weather days when I otherwise wouldn't be able to run or would have gone the gym in the past. With a little guy in the house it's a lot easier for one of us to jump on the treadmill for 30-60 minutes at a time rather than head outside. I imagine I'll be spending a good chunk of time here over the next 3-4 months before the weather outside gets better. In a way I'm glad I'm not doing any marathon training over the winter - I've done up to 17 miles on the treadmill, but that's pushing it. I definitely prefer outside for my long runs when possible.

Looking ahead, with Katie's blessing, I've decided to give Kona another crack in 2015. I have registered for IM Tremblant again. My goal isn't to simply qualify, but to win my AG. Of course, this is dependent on who shows up. I know there are plenty of folks in my AG that are faster. However, I feel that if I am able to execute on race day, including nutrition (which was lacking in 2013), there aren't many people who I can't beat. I'm all to aware that IM racing can come down to seconds in terms of a KQ, and I'm hoping that this time around I won't be concerned with such a small fraction of the race day determining my end goal. One thing I've learned is that time goals in IM are pretty meaningless. It is who finishes first at the end of the day, and I plan on being damn close to that.

I was surprised a bit this year by my ability to come close to a HIM PR in Tremblant given my low overall training volume. Here are the training volumes for the past two years:

The overall number of hours is nearly 200 less this year. I guess that consistent training over the previous four years was able to help me out a bit. Numbers should rebound next year to be closer to the 2013 levels.

I want to thank Steve Johnson of DarkHorse MultiSport for coaching me in 2013 and through September of 2014. His insight was helpful and I have become a better athlete as a result of working with him. THANKS STEVE!!

Here is to a happy 2015! I hope that I am able to take the lessons I've learned, move forward, and become a more resilient athlete in the future.