Looking back, it's been a little over three months since my last post. Many things have transpired since then. First, we took a two week trip to England, Scotland & Iceland, which was amazing. We managed to see Wimbledon, Henley, and the Tour de France on three consecutive days while in England. Scotland was quite the contrast as we were staying in a mountainous area, and all of my runs were quite hilly. I also managed to swim in a chilly Scottish Loch. Our two days in Iceland were breathtaking, and is definitely on our list of places to revisit.

Here Jackson and I are waiting for the peleton to ride by in Ripon on day 1 of the TDF: 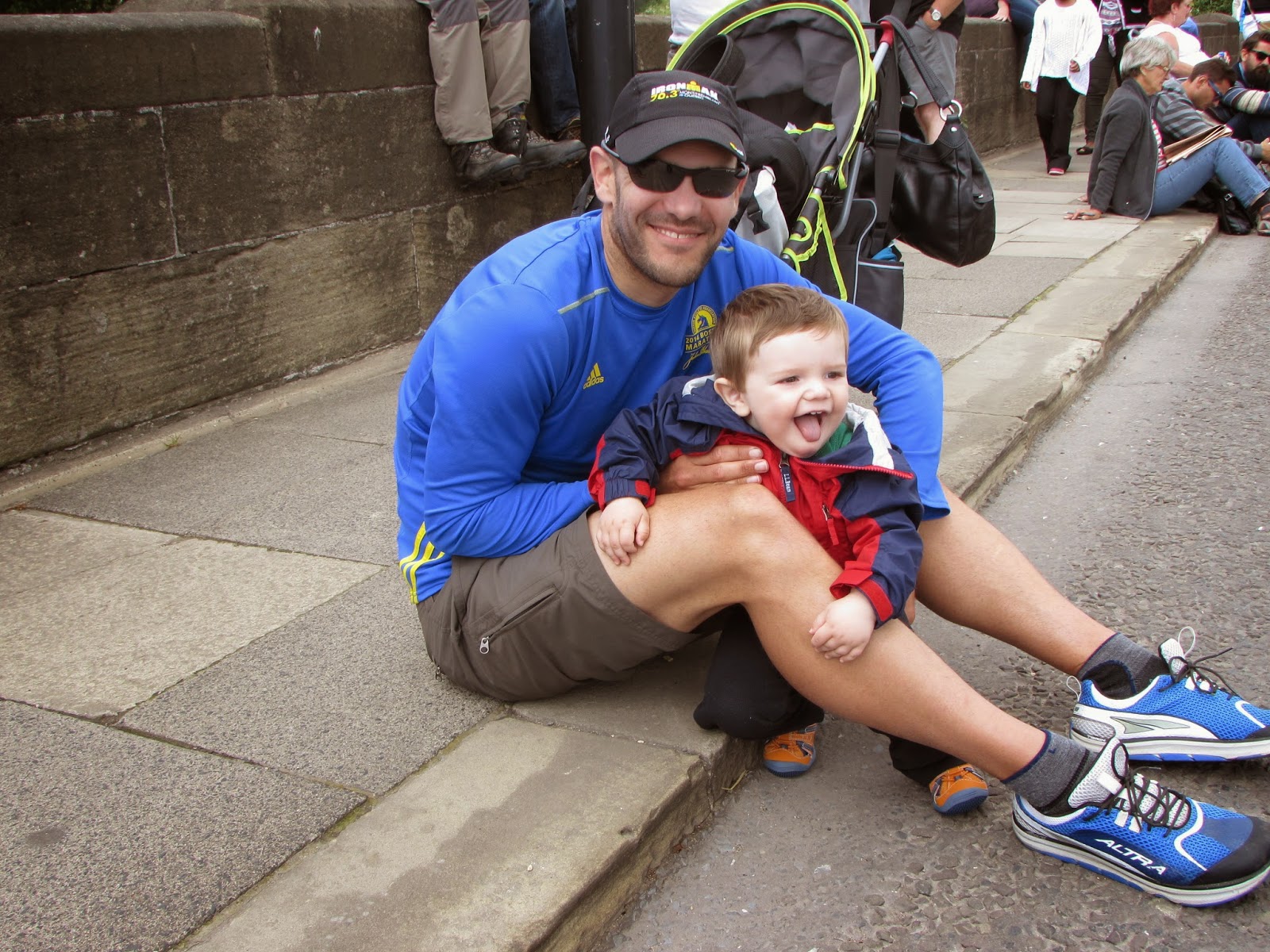 While on our trip we were constantly in contact with our bank and lawyer, as we were selling and buying a new house on the same day. In the end everything worked out, and we closed on both the sale and purchase on July 31st. During this period of time we traveled down to visit my parents on Nantucket Island, where I did a weekend double of a sprint on Saturday and an Olympic on Sunday. On limited fitness, I was able to win my AG in both races, but was a far way off from where I would have liked my fitness to be. Having not biked for our two weeks away, having limited swimming, and battling an IT Band injury, I took the races in stride.

I was able to get in a decent five weeks or so of training prior to Timberman in mid August. My long rides were up to around 3 hours, but my runs were short, getting in 20 or less miles per week. My longest run was 8.5 miles a week prior to Timberman, and that was cut short because my IT Band hurt. I wasn't going into the race with much optimism.

Race day arrived, and I drove the hour and half from the in-laws condo in Jackson, NH to the race site, where I'd racked my bike the previous day. My swim time was a shade over 33 min - probably about what my swim fitness warranted, and I got on the bike feeling like it was time to hammer. Normally, I'm able to average in the 275-280 watt range for a HIM, but my bike legs still hadn't returned, and I averaged 256 watts, still giving me a 2:22 ride. Not awful, but I had definitely been hoping to be around 2:17-2:18. 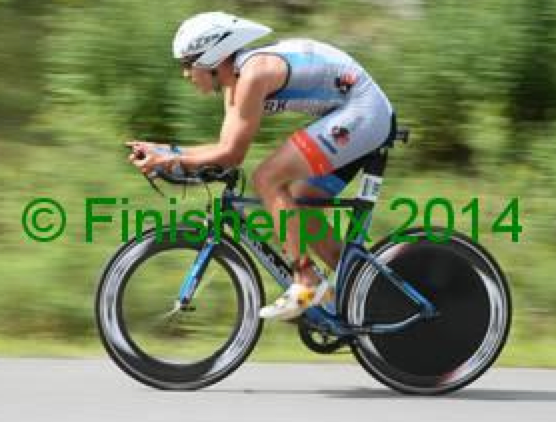 Heading into T2 I had no clue how my body would respond. This was to be my longest run since April. The run course at Timberman is some rolling terrain with some flatter sections at the turnarounds. I was hoping to be in the low 1:30's, but my pace gradually faded and I ended up with a 1:36 run. My IT Band didn't hurt that much and really played no role in my run. The lack of run fitness and overall run volume was the main culprit here. My total race time was 4:35, good for 8th in the AG and 56th overall.

I felt like Timberman was a good test for Tremblant three weeks later. I had a little confidence in my run getting a bit faster if I was able to be relatively pain free. In between the two races, school started up again and Katie and I returned to the classroom, both of us teaching 3rd grade this year. Jackson also returned to daycare and the days of less sleep returned.

After two weeks of school, we headed up towards Tremblant on a Thursday evening, spending the night in Burlington along the way. We arrived in Tremblant around noon time on Friday, and I waited in the long registration line. Eventually, we were able to get into our hotel, which was literally feet from the run course and about a two minute walk from transition. I highly recommend staying in the village to anyone who is racing the 70.3 or 140.6. This was our third time there for a race, and it's very convenient to park your car and be able to get everywhere by foot.

I got in a short run Friday evening, then a short swim and ride on Saturday morning. I was able to catch up with Colin a bit on Saturday, and I've decided that I'll be working with him in 2015. My goal for next year is quite simple - get to Kona. Two main areas of focus going forward will be strength, especially working on getting over the IT Band issues, and nutrition for IM racing. Of course, there will probably be a fair bit of training thrown in there as well.

Race morning arrived, and I headed down to breakfast, which opened at 5 AM for athletes. With the 8 AM pro start, I was actually able to go back to bed for an hour before heading to transition to set up my bike. Next stop was back to the hotel to say bye to Katie and Jackson and put on my wetsuit. It was only around 45 degrees, so I wanted to have my wetsuit on for the walk to the beach.

The start at this race was cool as usual. The fly over by a fighter jet was quickly followed by the pro start. I got in a short warmup then headed to the start with some of the fastest guys in the world. Strangely, I wasn't nervous. Maybe it was because I had no real expectations or because I had an injury plagued season. My plan was to stick to the middle of the swim course and try to find some feet to pull me around the 1.2 miles. 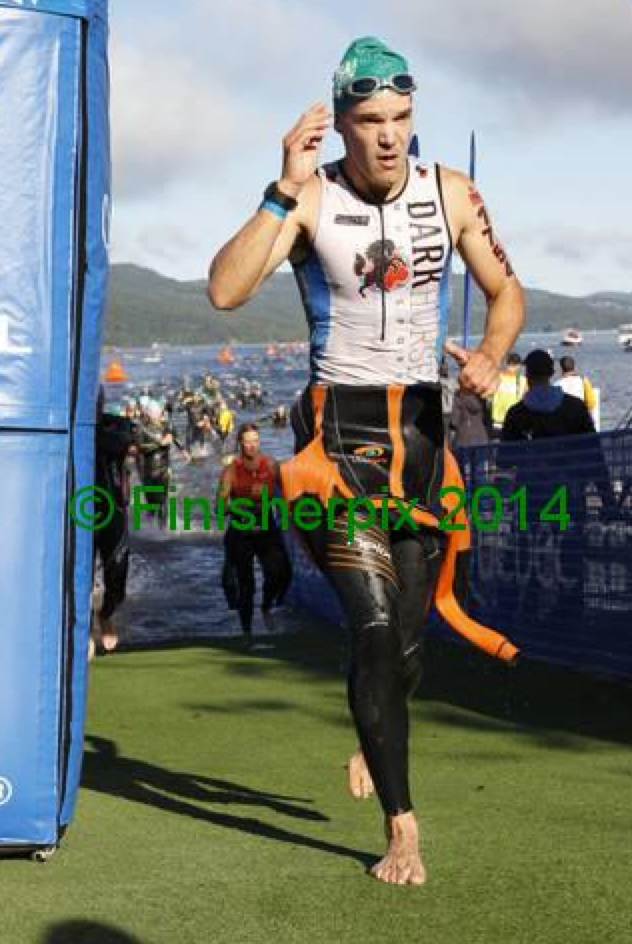 It turned out being my best HIM swim to date - I felt nice and relaxed and was able to do a little bit of drafting. With most racers being better than me it wasn't hard to find some feet to try and hold on to. I was pretty happy to come out of the water and see 31 min on my watch. Hopefully next year I'll be able to get down to around 30 min.

Look at all those people exiting the water who got to draft off me!

The run into T1 was pretty long, but I was able to pass a few folks, get my things on relatively quickly, and get out onto the bike course, where I quickly realized my bike legs were going to show up. The bike was pretty uneventful and I was pretty happy with the bike ride. I was about 4 min faster than on this course two years ago on similar power. I think I was smarter about my power output since this was my third time on this course (70.3 and 140.6 in last two years). 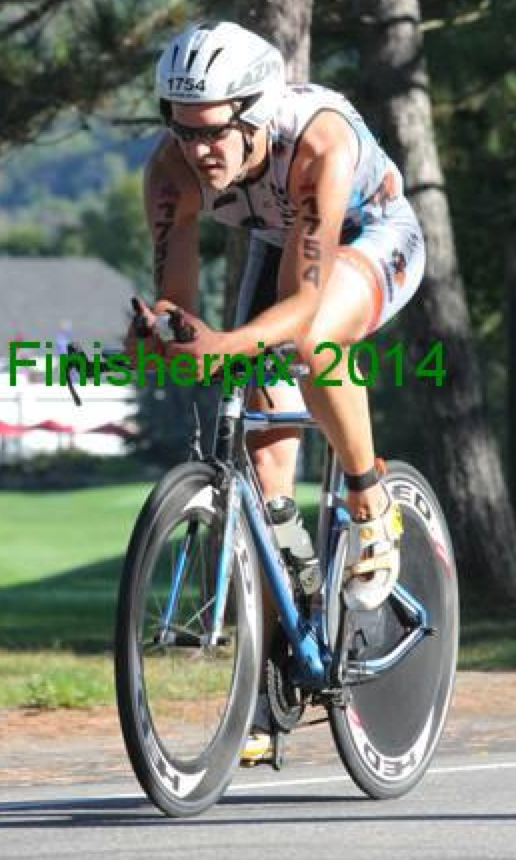 There were tons of draft packs that formed with 50+ riders in them. Luckily I was able to avoid them, but kind of disappointing to see.

Right around the time we passed the village and headed out for the last little turn around I was passed by 5-6 guys who were riding strong. I decided I'd do my best to stick with them, and I ended up riding legally with them, passing on some of the downs and being passed on the ups. Chris Thomas was one of the guys, and I hung with him on this last bit. He has won his AG at worlds before, so being able to ride at his pace for the last 20k was kind of cool.

I went through 28 miles in 1:07, but knowing the course, realized I had no shot at a 2:14 split. The second half of the ride has more elevation gain, and I rode that part in 1:11. Looking back at the data I probably could have been slightly above 280 watts and still had a similar run - my avg HR was only 154, and it is usually in the upper 150's for a HIM.

Power Profile - Notice how I only had around 10-12 spikes of 400+ watts over the first 45 miles, but nearly 15 in the last 11 or so miles where there were some steep, punchy out of the saddle climbs:

I came off the bike feeling good, but had no clue how the run would go.The overall time on my watch heading into transition was around 2:55.

I decided to target a 7ish pace, and was able to hit that for the most part on the first loop. The run course was changed for this race from a single loop to a double loop. By doing this they essentially doubled the elevation, as the omitted part was virtually a flat 3-mile out and back. Each of the two loops included a nasty little hill near the lake that was hit in both directions, and a steep climb in the pedestrian village.

At the end of the first loop I was right around 45:30 on my watch, and had the hope that running the same time for the second loop would sneak me under the 4:30 mark for the day. Two years ago I went 4:35 in the 70.3, so I was confident I'd be able to beat that time. Unfortunately, on the second loop my lack of run fitness caught up to me and I ended up around 47 min.

I feel that if I hadn't been injured a good run on this course would have been around 1:25-1:27 and a time in the low 4:20's. However, I was still pleased with my overall race given my fitness and lack of training this year compared with last year.

My overall time was 4:30:27, good for 60th in the M35-39 and 366th overall. My goal at the start of the season had been a top 25 AG placing at this race. Looking at times, 25th in my AG was 4:20. Had training gone well this season, I could have been a little quicker on the bike and with a solid run I think I would have been pretty close to that time.

Right as I crossed the finish some guy sprinted by and did a flying karate kick, and ended up sliding down the finish ramp on his knees. Quite the photo bomb! 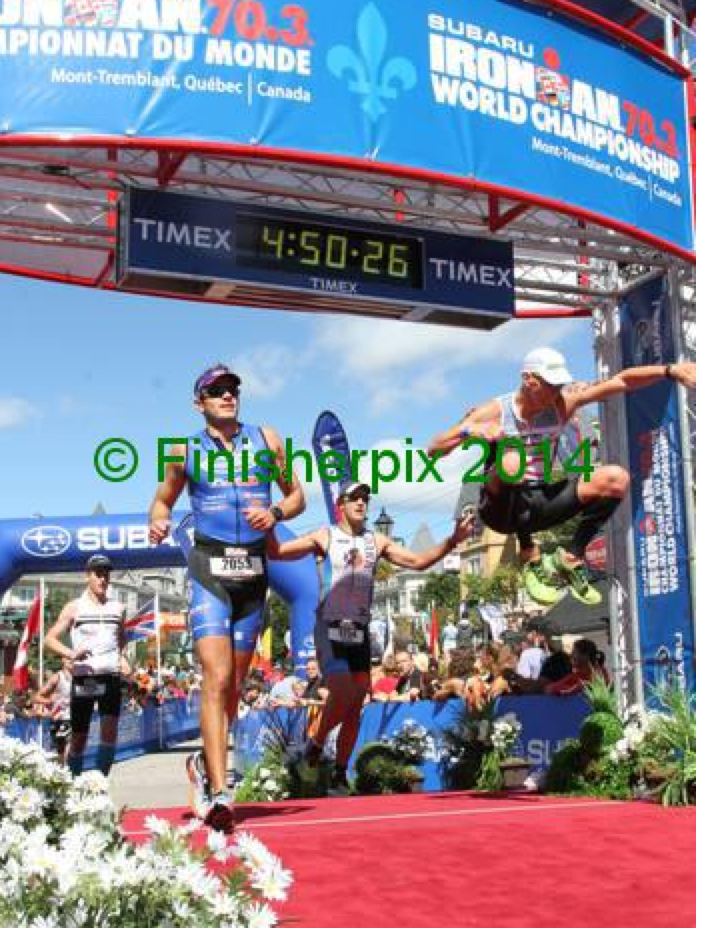 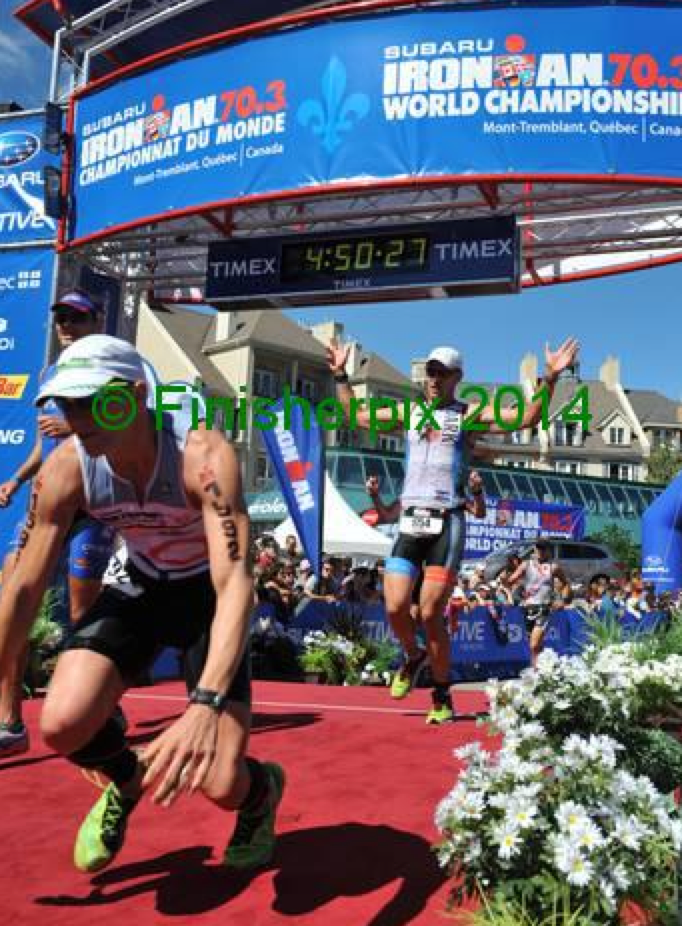 Moving forward, I'll be running the Marine Corps Marathon at the end of October, pacing my wife Katie in her first marathon. My run training will be quite light over the next six weeks, but I should be able to get through the marathon, hopefully getting Katie a finish somewhere in the 4:00-4:30 range.

November and December will be a time to begin to really focus on working on strength training, getting my injury dealt with, and looking forward to starting to train for IMMT in 2015. I'm definitely hoping that 2015 is a much better season than 2014 has been.
Posted by Nate Thomas at 6:21 PM