As a teacher, the summer doesn't officially end until school is over. For me, that final day was June 21st. With two hurricane days and five snow days to make up, it felt like the end of the year would never come. My class this year was a bit of a challenge behavior wise - it was definitely a learning experience, and I think I became a better teacher as a result. That being said, I'm definitely glad that summer is here so I can spend more time with Jackson and devote time to IM training as well.

The weekend before the final week of the school year I raced a local HIM, the Patriot Half. I had done this race two years ago, and went in with much better fitness. I felt that my training was leading to a race time of somewhere close to 4:20 - maybe even under that if things went perfect.

Talking with coach Steve, I decided to switch from the M35-39 to the elite wave. There was a small prize purse for the overall podium slots (only available to those in the elite wave), and I'd also be racing on a clean course (at least for the first loop on the bike). So around, 7 AM on June 16th I lined up for the first time with the 'big boys.' I felt that my swim training was pointing towards a low 30's swim. However, I quickly lost touch with the lead swimmers and my sighting was horrible. A few racers later told me they got a long course (1.4 miles) based on their Garmins. I came out of the water right at 35 minutes, feeling a bit upset, but also knowing my better legs were ahead of me. I was 10/10 of the elite men - at least I knew where I stood and couldn't move backwards! 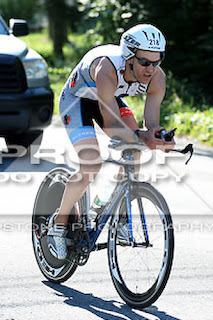 After a quick T1 I was on the bike. Specific instructions had been given to "STAY UNDER 280 WATTS!!" Two years ago I went 2:21 on the bike on 255 watts, so I felt that being around 280 should lead to a time in the 2:16 range. That didn't happen! For some reason bike times were slow across the board. I finished with the 3rd fastest time in 2:20 on 273 watts. I was able to pass five guys from the wave, so I came into T2 in 5th out of 10. There was a bit of wind and the roads aren't in great shape, but I definitely should have been faster than that. Again, a bit of a disappointment, and I was realizing that my hopes of being close to 4:20 were gone. 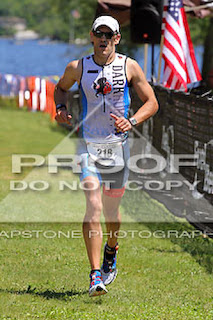 T2 was set up a bit different than two years ago, and led to a slower transition. Out on the run I felt pretty solid for the first two miles, both at 6:36. After a half marathon PR of 1:20 three weeks earlier, I felt I could run a 1:25-1:26 here. It simply wasn't in the cards, though, and my pace after the first two miles stayed right around 6:50 - my legs didn't want to go any faster.

The run was quite lonely - I didn't pass anyone and didn't get passed. There were some rolling hills, but nothing crazy steep. The course was pretty exposed to the sun, but temps were only in the upper 70's to low 80's. I crossed the finish line with a 1:29 run and a finish of 4:29, pretty bummed with my overall time. I finished 5/10 in the elite wave and 7th overall.

I know this was far from my best race, but still a PR. My taper wasn't that big, as Steve has me gunning for a Kona slot at IMMT in eight weeks. I'm looking forward to this next big block of training time to really nail my nutrition and pacing for Tremblant. Bring it!!!
Posted by Nate Thomas at 5:01 AM