Here we are in the middle of June in 2020, and the world is quite different than it was just three to four months ago. It's funny how months and years go by without much change....and then this. First of all, I consider myself fortunate to be white and college educated with a job. The current situation in our country is in upheaval for many not in the position that I am in. I feel that my life is a little bubble in a comfortable neighborhood in which we can continue to live our life with little fear. However, many people in the US are not in my position. I can in no way even begin to imagine what life is like for someone who might be racially profiled or who has to deal with racism or police brutality on a daily basis just because of ethnicity, skin color, or any other 'difference'. What is happening is horrible, and the leadership of our country is just exacerbating the problem by trying to militarize the country with blatant disregard of those standing up for inherent rights. The 'changes' that I've gone through pale in comparison with what many Americans go through on a daily basis. 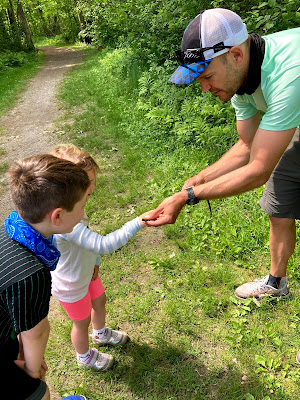 My 'change' took place on March 12th, my last day at school as a teacher. It has been just over three months since then and life as we knew it is quite different. Trying to teach remotely was challenging for myself and my wife. It has also been a struggle getting our first grader to get all of his work done. However, we consider ourselves lucky. We have our jobs and an income and get to have a lot more family time. We are going on daily walks (catching snakes and frogs) or bike rides in our neighborhood, and getting to spend a lot of time playing outside and having fun. I've been venturing 'out' once a week to do the food shopping, but otherwise we are pretty hunkered down during the day. Looking at how dire the situation is for many people in our country and around the world, we feel blessed and grateful for our health and safety. 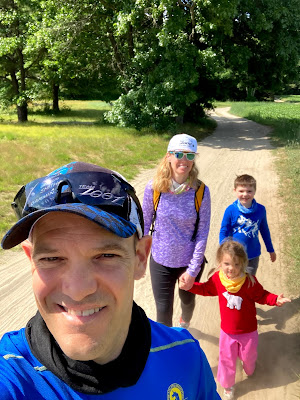 Never in my wildest dream did I envision teaching 3rd graders from home. Elementary school is as much about social learning as it is about academic learning, and it's been a struggle for many of my students to engage due to loosing that social piece of their lives. My students' families have been affected by the current situation, both financially and health related. The school year is now done, but I definitely don't have that end of year excited feeling that I normally have heading into the summer. I just wish things could return to normal, but I don't think that will happen any time soon. When we return to school in the fall, chances are that there will still be a form of remote learning taking place.

In terms of training, not having to go to school has allowed me to experiment with higher volume than I've ever done before. This wasn't the plan, per se, but I just explored with increasing things as the weeks went on. Back in March, my hamstrings were a bit tight, so I decided to ease off a bit on running and increase biking. After a couple of weeks I was over 300 miles a week for biking, and soon closer to 400. I hit around 23-24 hours of training a week at the end of May and totaled 99 hours in May. My biking has never been better, and I've seen all time high power numbers across the board. With racing nowhere in sight, I've taken to targeting local KOM's, and so far have taken a bit over 30 in the last several outdoor rides (generally one outside ride a week).

I've found a few things help going for KOM's. First, I need to know my strengths. For me, all out power is better than climbing power, so the longer the KOM the better. I've also found that aero is still king, even if that comes with a bit of a weight penalty. My current go fast bike is around 20 pounds in 'race setup,' which is a good bit heavier than those with light road bikes. However, the faster we go the greater the need for aerodynamic advantages. Several of the KOM's I've taken have been multiple miles in length, and I've averaged up to 32 mph over these distances. I'd be hard pressed to do that on a road bike, even in the drops. I'm using a 90mm deep front wheel, latex tubes with Conti 5000 tires and a disc on the back. I've gone with one BTA water bottle for most of my KOM efforts to minimize drag and I've worn my race suit and aero helmet. The new bike has much narrower arm pads, which aids in getting my body a little smaller in terms of a front profile. It did take a little getting used to, as having arms a bit wider in the front is a lot more steady and easy to steer with. Here's the bike in racing setup. 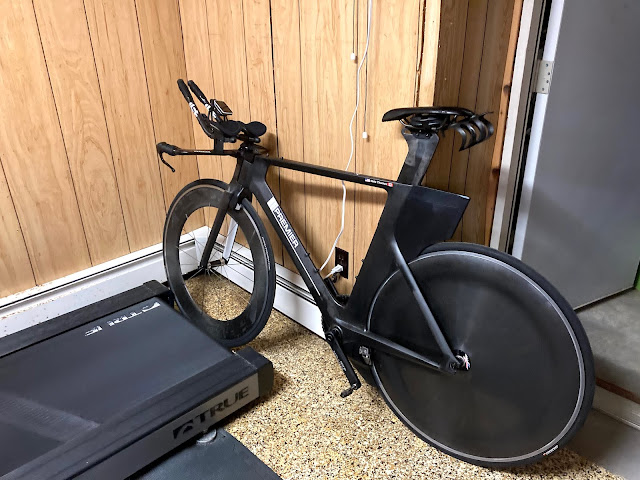 Jackson turned 7 back in April and he really wanted a 'gear' bike like daddy's bikes. So we ended up getting hime a bike from REI. Unfortunately, the rear derailleur wasn't set up correctly out of the box. Within five minutes of starting to ride it, he shifted up and the derailleur went into the rear spokes, breaking the hanger. REI was great, and sent out a replacement bike in about five days, and that has been great so far. As a result of Jackson getting a 'mountain bike' I figured he couldn't tackle off road trails on his own, so I joined him. I ended up getting a bike from REI as well, which was really my fourth or fifth choice in terms of bikes. Apparently inventory is low due to the Covid19 situation and a lot of people are buying bikes at the same time. I looked at bikes from YT, Commencal, Fezzari, Norco, and even some of the bigger brands like Trek, Giant & Specialized. In the end, I got a bike from a German brand called GHOST. It is a full suspension bike with SRAM SX Eagle and it has some decent components that I can upgrade in the future if I start enjoying the mountain biking (derailleur probably first to upgrade). Here are a few pics of setting Jackson's bike up out of the box and my bike too. 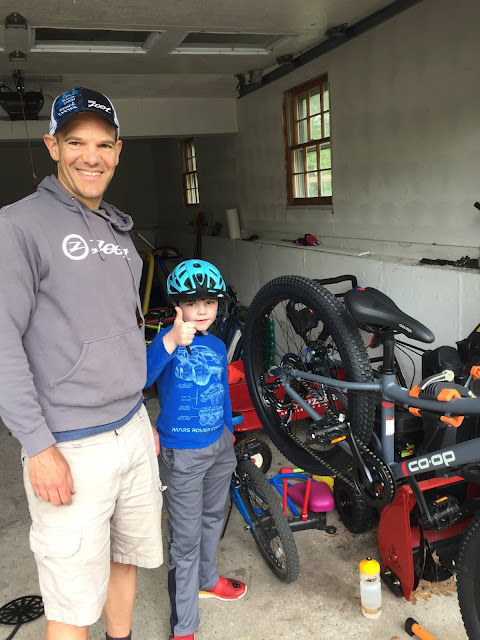 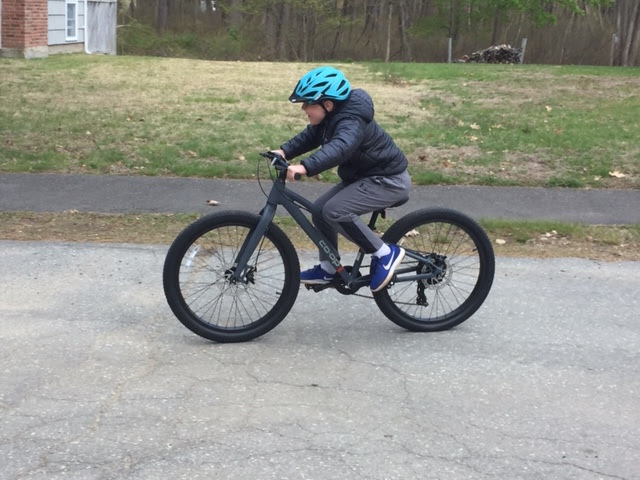 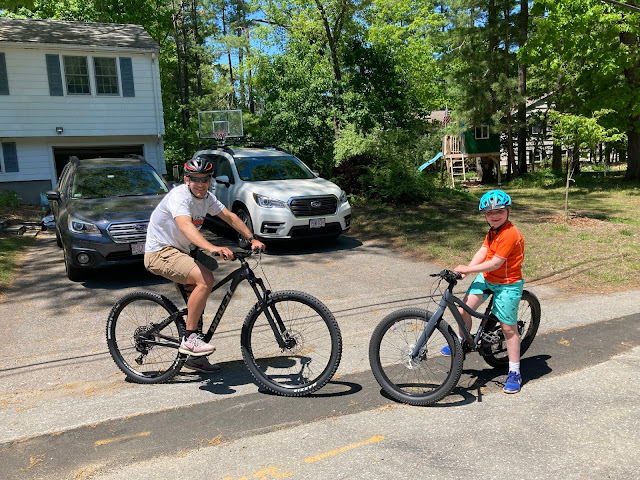 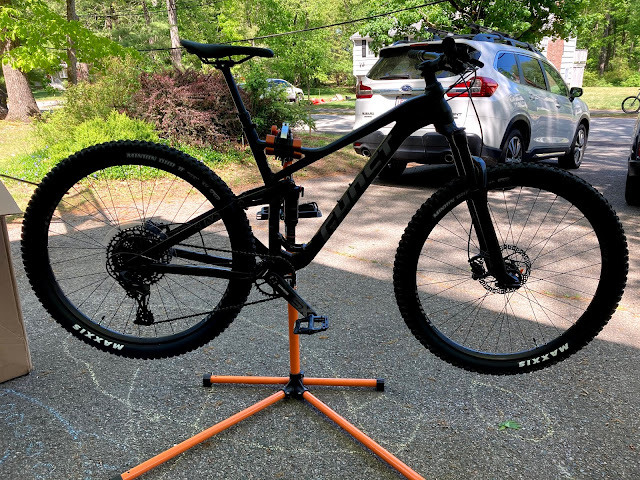 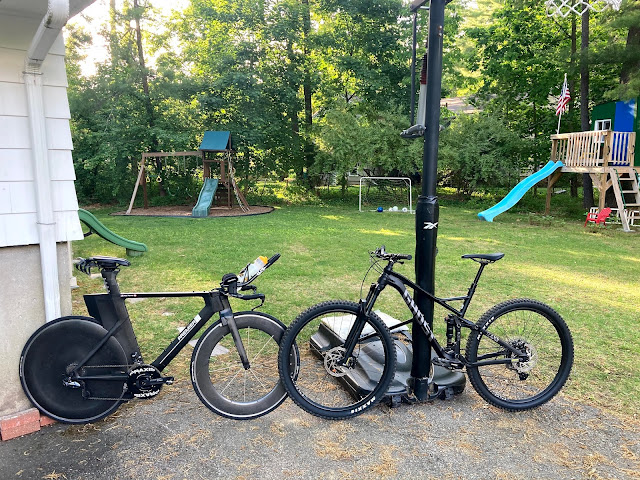 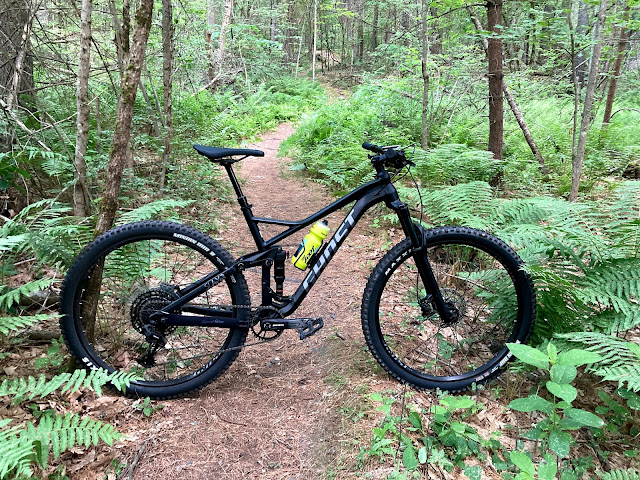 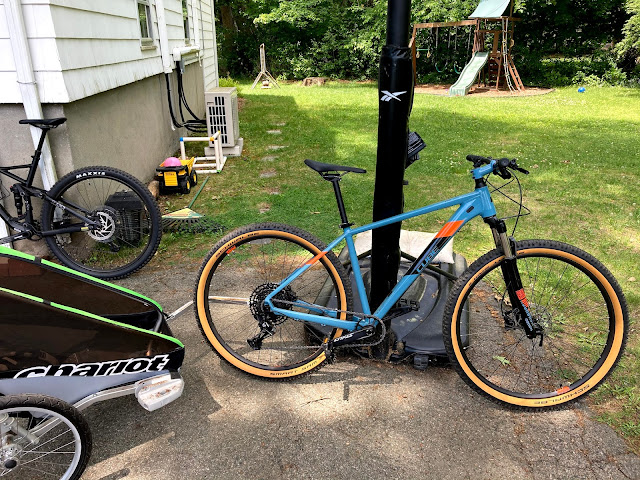 Of course, once I got myself a mountain bike Katie was left out. As an early birthday present I got her a decent hardtail. I ended up finding a Cube Acid 29er on Wiggle.com, and it was shipped from Ireland. It actually has a better groupset than my bike (NX vs SX), but I'm already thinking of getting a GX rear derailleur and shifter for my bike - the rear derailleur on SX apparently isn't the best design and is already giving me some issues. I just had a trailer hitch put on our car and I have a Kuat bike rack ordered from REI that should be here in the next week or so. I'm hoping that we will be able to get up to both New Hampshire and Maine this summer, and having the ability to bring both road bikes (on the roof rack) and mountain bikes (on the rear hitch) will be nice. 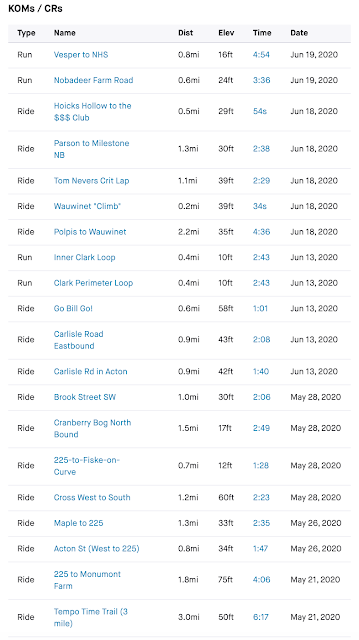 With school done, I wanted to visit my parents on Nantucket. The trip would be a little bit of a test run for bringing the family along later in the summer. School ended on a Monday, and on Thursday I was up early and drove to Hyannis. I decided to bring along the race rig and try to hit up some KOM's on Nantucket. My Dad's health has not been good for many years (a combination of Alzheimer's and Parkinson's has put him in a place where he can no longer communicate or really recognize anyone. My Mom is a true angel, as she's been his primary care-giver for many, many years now. There have been a few times over the last couple of years where I thought we'd said our good-byes to my Dad, but he's bounced back. It had been a little over three months since I'd been to see my folks - right before the Covid-19 situation really hit us. On the Thursday that I arrived I targeted a few KOM's on the bike, and I was able to get six of the eight I attempted. On Wednesday I tried a few by foot, and managed to snag a few more. Run fitness is pretty much at a several year low, but I was still able to garner a little leg speed. That will definitely be something to focus on, as well as building back the run volume, as I'm planning to do a 50k trail run some time in the fall. I'd like to do it in under 4 hours, so that will mean getting back some run fitness and logging some decent running miles. 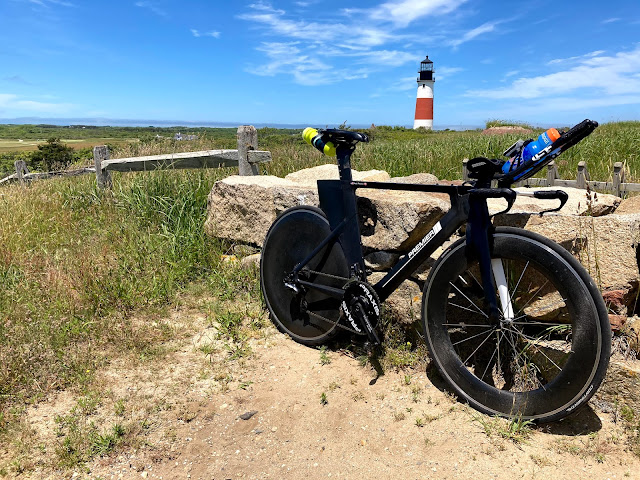 I am registered for Maine 70.3 on August 31st and Patriot Half, which was postponed to September 6th (from June 20th). While it might be interesting to do these two races six days apart, the chance of either happening is very unlikely. The focus will be shifting towards a self-supported 50k some time in October or early November. I imagine that stacking some long runs on back-to-back days will be helpful to have a decent run. I'm also thinking that I'll do the 50k in Great Brook Farm State Park, which is where one of the above pics of my new Ghost bike was taken. They usually have a fall 50k at Great Brook Farm, but I'm not sure that'll be happening. If it does, I'd probably do the actual race, but if not I'd plan on several loops back to my car for hydration and nutrition.

To close out, here are a few last pictures of the new additions to our family. At the start of April we adopted two kittens from the same shelter we got our previous cats from in North Conway. Katie and I drove to New Hampshire on a Saturday morning to pick up the kittens. They are named for two special places to Katie and I - the Na'Pali Coast in Kauai and Rose Hill in St. George's, Bermuda, where we've vacationed several times. The names of the cats are Pali and Rosie. 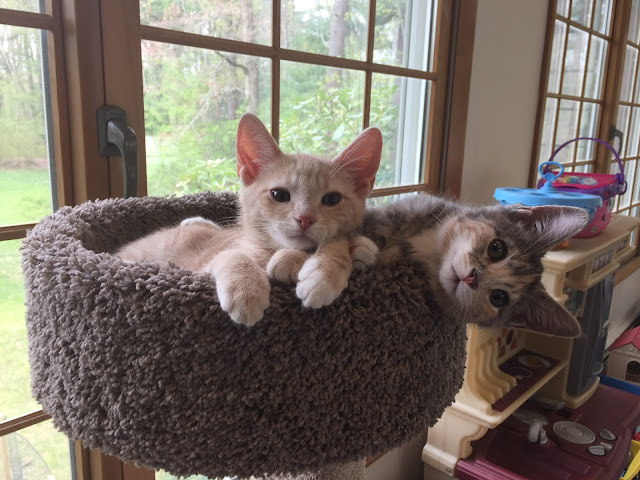 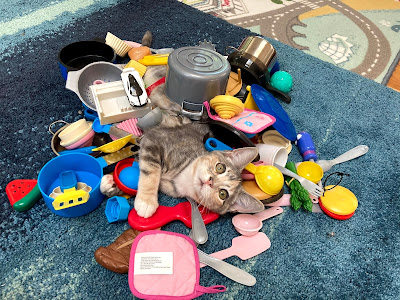 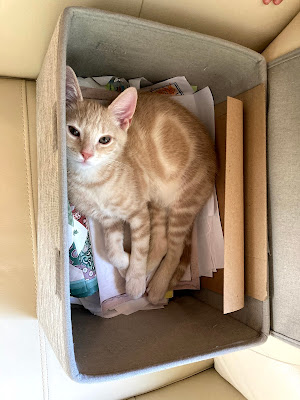