What is the biggest determining factor that leads to success in triathlon and other endurance sports? I'd argue that it is consistency above just about anything else. Putting training time in every day, week, month, and year, and then repeating that process over many years is what a lot of successful athletes have in common. Yes, there can be an 'off season,' or as some call an 'out season,' but that isn't an invitation to take things easy and let fitness degrade substantially.

As I look back at 2019, which was my 10th year doing triathlon, I feel it was the most consistent, well balanced season I have had. I also didn't have to take any time off due to an injury, and a big part of that was carefully listening to my body and taking some days easier than I may have done in the past if I felt something was a bit off. A few easier days, and then I could be back at it rather than pushing through and possibly ending up with some sort of injury.

I've come to realize that my body responds a lot better on 'rest days' to do some sort of active recovery instead of complete rest. For the most part this season I took Monday and Friday as somewhat active recovery days with a three-day harder block in the middle of the week, and then a big weekend of training. This approach led to run PR's at the 70.3 and 140.6 distance and my first visit to Kona. I'll continue this approach going forward even though there won't be any IM distance races for at least the next three seasons. My approach will be hitting the 70.3 distance and a few shorter events, trying to still set some PR's, and then maybe shooting for Kona again when I age up to 45-49. I feel there is a little unfinished business there, and I'd like to go back at some point.

Below is my training from 2019. I had a total of seven days without any training, and most of those days were after the two IM's. This was my first season racing two IM's and also the first time I totaled more than 700 training hours. I was able to get in over 8,000 miles of biking and just over 2,000 miles of running. Swimming was a bit over 350k yards - quite a bit off my biggest swimming year, but decent and led to an IM swim PR of 1:04 in Norway. The swim in Kona was a different story... 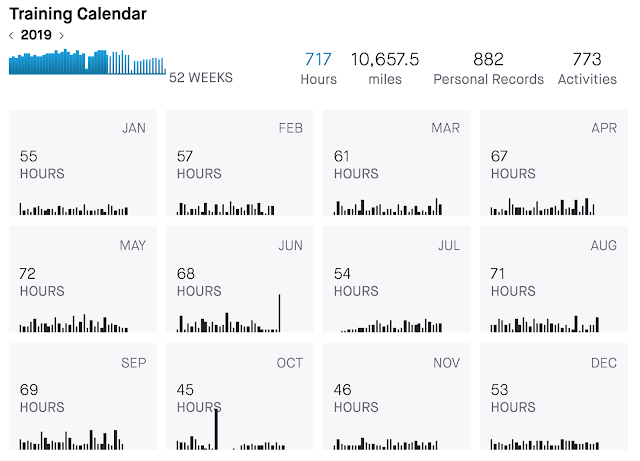 Looking back at 2019 I'm both happy and frustrated. I'm pleased that I had a solid, injury free season, and accomplished my goal of qualifying for and racing at Kona. The frustration comes from my race there, where I feel I wasn't mentally ready to deal with setbacks during the race. Going forward, I will work more on the mental side of things, focusing on the small things and being as present as possible during training and races. I feel I have the ability to consistently be near the top of my AG in most races, and focusing on the mental side of things will hopefully give me more of an edge.

Training over the start of 2020 has gone well, and I recently competed in the Goodale's & NEMS indoor time trial in Nashua, NH. I won this race last year for the first time, after a few second place finishes in the past. This year I ended up in third overall, about thirty seconds slower than last year. Watts were identical (per my power meter) to last year, but I was about eight pounds heavier than this time last year - being a little lenient in terms of eating post Kona and over the holidays didn't help! I'm happy with the power from the race - 370 watts - and I feel confident that I will have some good bike legs in races this year.

I have acquired a new bike, a Premier Tactical, and, although I haven't ridden it outside, I really like it. The cleanness of the bike in terms of being aero is a big jump from my previous Blue Triad SL. This bike has more adjustability and should put me in a more aero position than in the past. Putting out similar watts to previous years should have my bike times be a bit quicker. I can't wait until the spring when I can get outside with the bike and see how it rides! I added a Power2Max power meter with a 54/42 chainring, which I hope will help me out a bit on sections I may have spun out in the past (think the Hawi descent). Big thanks to Gunther at VeloFix for helping set things up for me! 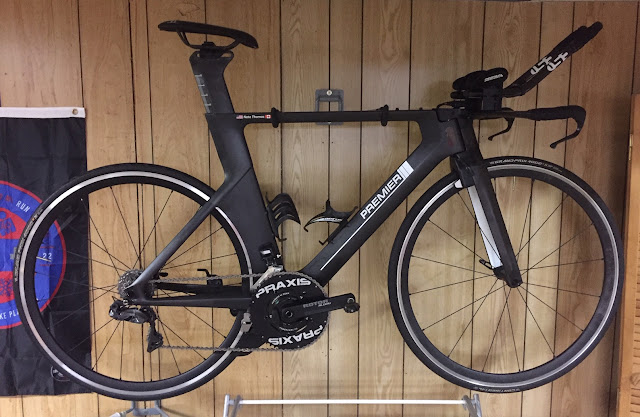 In terms of racing, I'm planning on running a half marathon at the end of March, which is about nine weeks away. I'm hoping to be close to the 1:21 I ran at that time last year. I have signed up for two triathlons - Patriot Half, an awesome, local half distance race that is near the end of June and Maine 70.3, which is at the end of August. I'm contemplating signing up for CT 70.3, which is three weeks prior to Patriot, and will probably race the Nantucket Triathlon again on the third weekend in July. The main goal of the year is qualifying for the 2021 70.3 WC in St. George via Maine 70.3.

We are planning another trip to Europe in July, visiting relatives of my wife's family in Sweden and also spending a week in Ireland. I know the trip will mess with training a bit, but it could be a good time to put in a nice block of run training and possibly try to find some pools near where we'll be. I have found that even taking a couple weeks off from biking isn't horrible, and I'm able to regain power on the bike again after a few harder sessions.

We still have a few more months of winter here in New England, but my family enjoys winter time activities. Jackson is a busy kid and is currently involved in karate, basketball, skiing, and indoor soccer. We've been able to get up to the North Conway area a few times this winter, skiing and recently doing a little snow-tubing at Cranmore. We had a fun blue-sky day there over the long MLK weekend! Although there hasn't been that much snow, we're holding out hope that we do get a bit more accumulation before the winter ends. Here's to a consistent and healthy 2020! 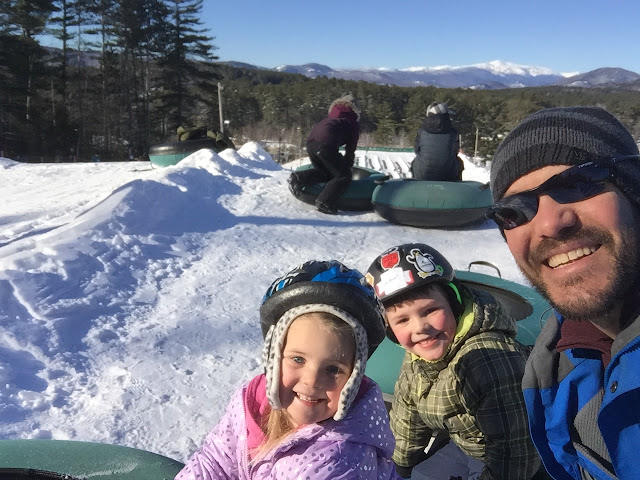