I'm already three weeks into the school year and starting to get back into the school schedule. After IMLP we had a whirlwind of a summer with a nearly three week trip away from home before two weeks leading into the start of school. Being teachers, my wife and I make the most of the summer, and this year we planned a trip to California, the Canadian Rockies and Kauai. Most of this post will be pictures of the trip with some captions, then a brief writeup of Pumpkinman.

We returned home from Lake Placid on a Monday evening, and very early Wednesday morning we were on a plane bound for San Francisco, where my brother lives. We were there for three nights, staying in a hotel outside of the city, but fitting in lots of activities.

We visited the Bay Area Discovery Museum, and had a great time exploring the grounds - Hannah and Jackson had a blast! 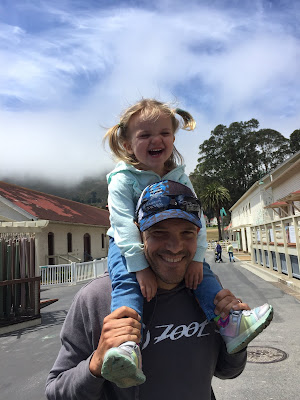 We also went to the California Academy of Sciences, which is a combination of an aquarium and a natural history museum. 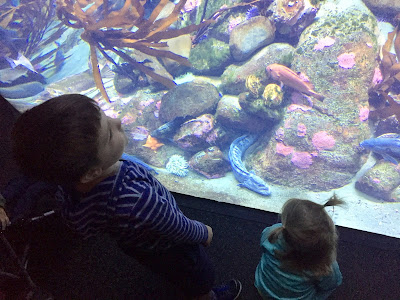 My three cousins and uncle & aunt live west of San Francisco, and we met them in Vacaville. Jackson had a great time playing with all of his 'new cousins.' The temperature difference between San Francisco and Vacaville was crazy - 57 degrees ----> 112 degrees! 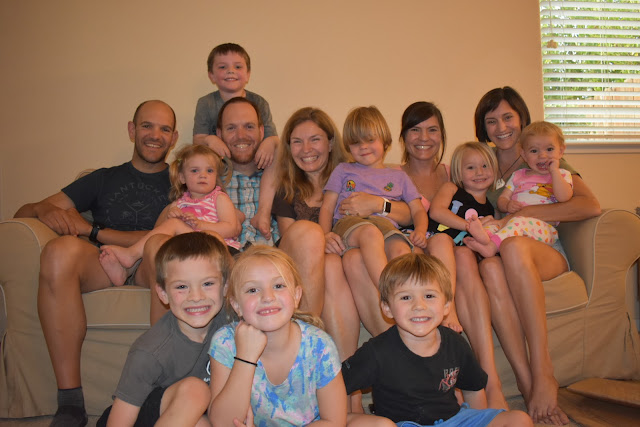 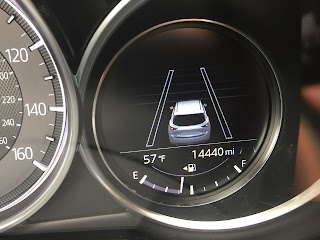 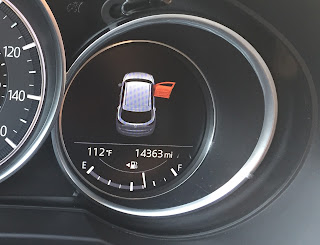 After San Francisco we flew to Calgary. We rented a car and drove an hour west to the small hamlet of Dead Man's Flats, which is just outside of Banff National Park. This was the third time that Katie and I have visited Banff - it's that beautiful to warrant return visits! The scenery just outside our timeshare was amazing. 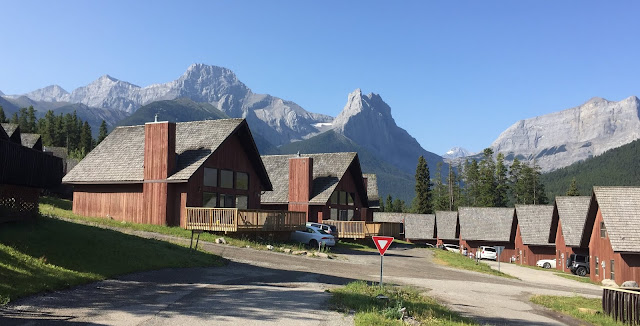 We spent most of our week out in the park, visiting the spectacular areas in the park. This included a two hour drive (and then short hike) to Peyto Lake. The color of the water comes from glacial sediment - it looks tropical but is frigid!

On two different days we rented mountain bikes in Canmore. When Calgary hosted the winter Olympics Canmore was the XC Skiing venue, and is considered one of the best xc ski systems around. We biked on the trails there and saw two black bears. 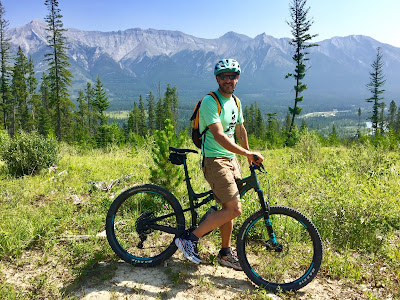 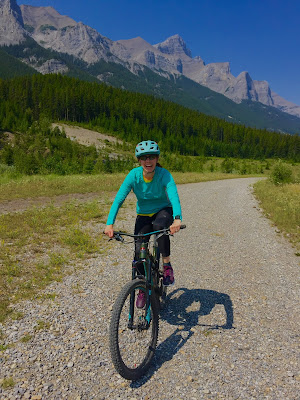 Black bear about 150 feet away! 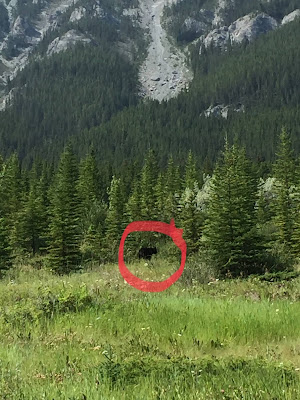 Hannah really wanted to ride like her bigger brother, but we'll have to wait a few more years for that! 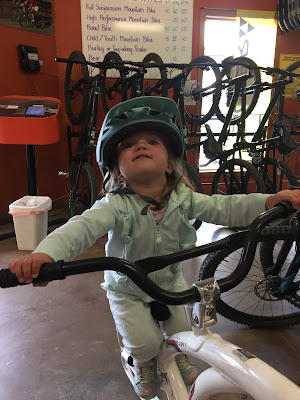 Riding with Jackson through the shooting area on the biathlon course. 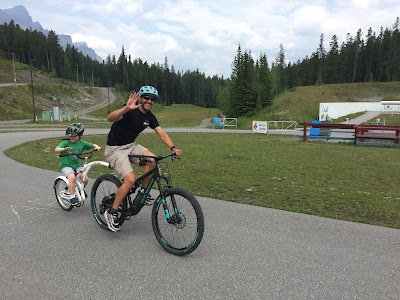 We also visited a friend of mine, who was teaching at The Banff Centre, an arts center in Banff. There were lot of Elk wandering around, including this one, which Hannah loved to watch! 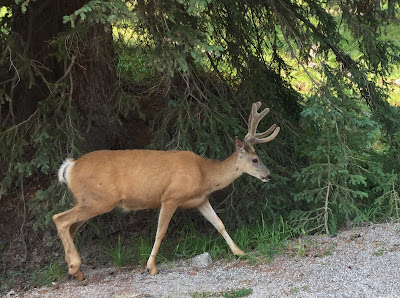 While in Canada, I slowly began doing a bit of exercising. After IMLP I took a complete week off with absolutely no workouts. That was a bit odd, as during all of 2018 leading into IMLP I only had two complete rest days. I began using an elliptical machine at our timeshare and swimming in the 20 yard pool there. My left leg still hurt a little, but it was a TON better than during and right after IMLP.

After the week in Canada we headed back to Calgary for the next leg of our trip - heading to Kauai. Here's where we hit a bit of a snag. Our flight from Calgary to San Francisco was on time, but upon landing we were told there wasn't a gate available - that doesn't seem like the best planning! As a result, by the time that a gate opened up and we tried getting to our flight to Hawaii, we missed the connection. We had to wait around 90 minutes in a United customer service line, and eventually got a hotel and food voucher. We were rebooked on a flight the following morning to Denver and then to Kauai. This led to us missing a full day in Kauai, which was a bit of a bummer, but we took it in stride and Jackson and Hannah were troopers. It was a bit hard on the 8+ hours on the plane from Denver to Kauai with Hannah, who wanted to keep moving, but we did survive. The next fight was waiting over an hour in line for a rental car, but we finally got to the next time share in Poipu (Kauai's southern coast) around dinner time. You really can't complain all that much when you are headed to a beautiful place like Hawaii, can you?

On our two previous trips to Kauai we had stayed in Princeville on the north shore, so the location was new to us. There was some great trail running, and my left leg was feeling good enough to slowly ease back into running.

Due to jet lag, we were up very early on first few mornings and got to see the sunrise. 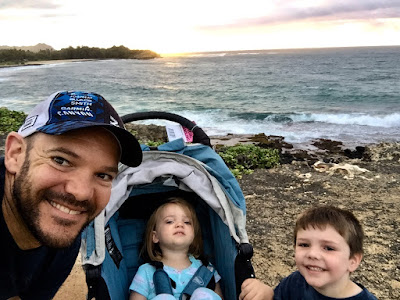 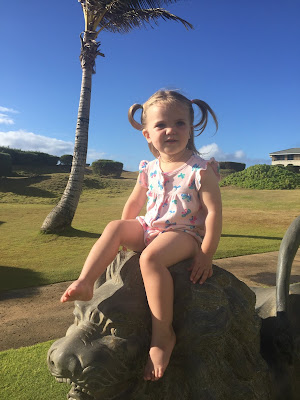 We visited Waimea Canyon and got to look down on the Na'Pali Coast. The 22 mile hike along the Na'Pali Coast is closed due to torrential rains and mud slides earlier in the year. Katie and I did this hike on our two previous trips to Kauai, but that was pre-kids! 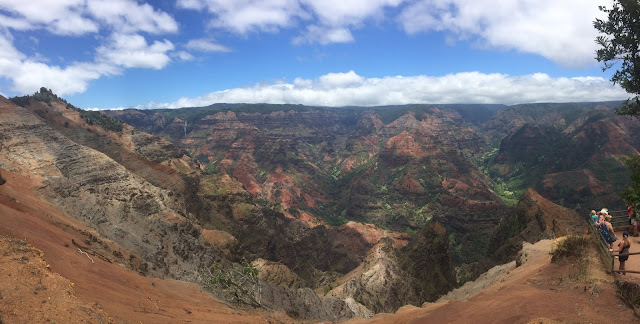 The beach way down there is where we camped many years ago! 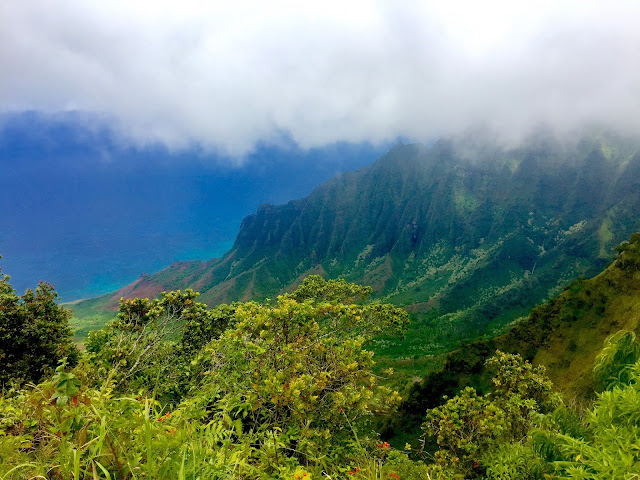 One day we saw an awesome rainbow on our way back from a day out.

This is the terrain I did most of my running on. There were several very technical miles of trails just north of where we were staying along the coast. As you can see, the weather was bright and sunny on some days and rainy on others, but always breathtaking!

An evening sunset at our timeshare. 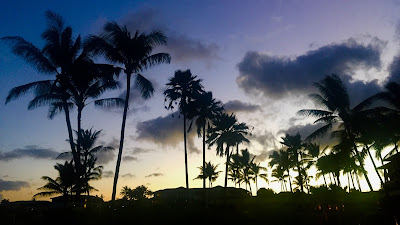 Not sure Hannah wanted this hug! 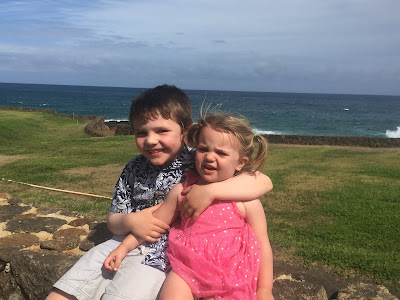 Finding a friendly cat to pet at the Kauai Coffee plantation. 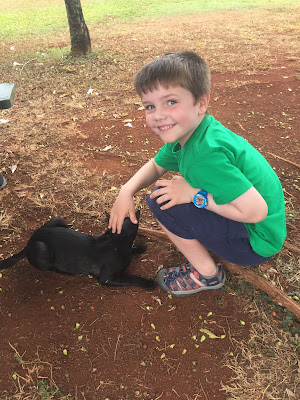 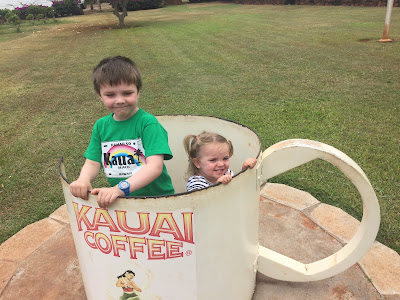 In the middle of the week we rented mountain bikes and rode on a nice trail along the eastern coast. 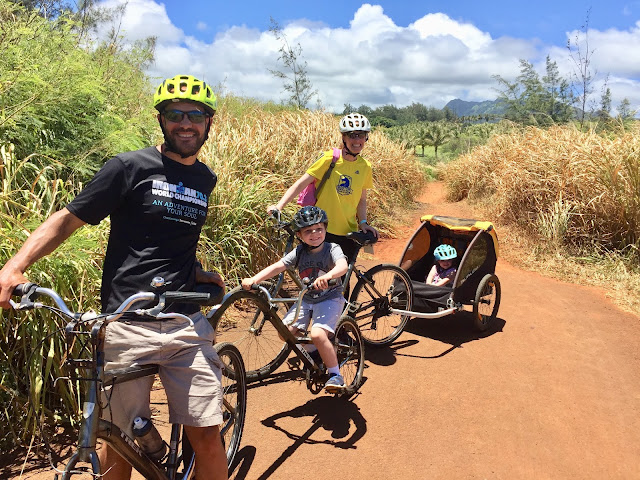 Our rental was a white Jeep - definitely a few of them on the island! 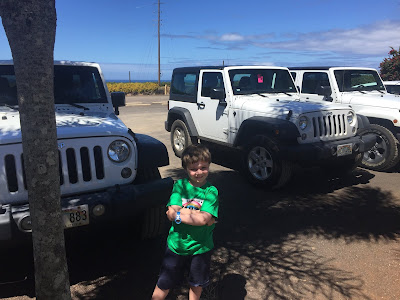 Soon, our trip came to an end, and it was a very long 20+ hours of flights and airports to finally arrive back home. Just before the start of school we had a combined birthday party for Hannah and me. We both had September birthdays, but it was easier to have a party before school began. Hannah was turing 2 and I was turning the big 40! We had a jumpy house with a water slide for the party, which was a big hit, and I was very happy that nobody got hurt - I'm always worried about smashing heads or something else in a jumpy house. 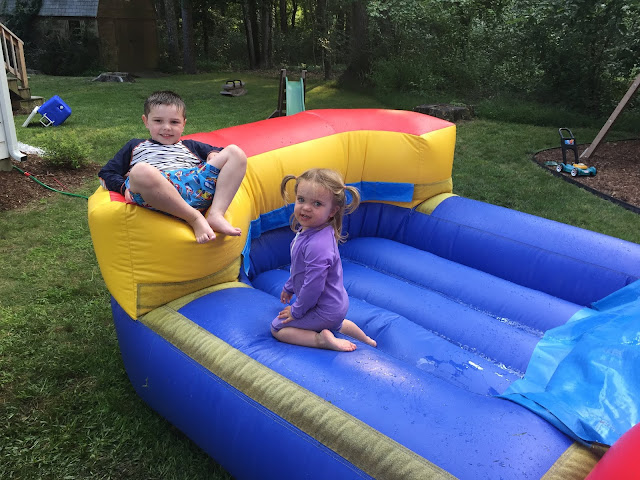 After returning from our trip I had decided to sign up for Pumpkinman, a local Half Ironman in southern Maine. I did this race two years ago, but the race was canceled mid run due to a wicked strong thunderstorm (throwing in wicked as we live near Boston). I ended up having a pretty solid race considering my lack of fitness due to little training after IMLP. The bike course is a bit short, so my time of 4:16 is probably five minute quicker than on a proper bike course. I was still pretty happy with my time and I finished third overall behind two friends, Lucas Pozzeta and Colin Cook. 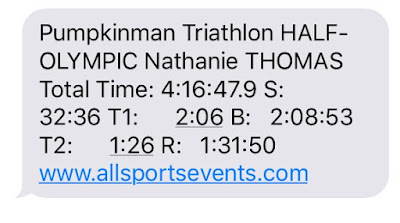 The post race food is a full Thanksgiving dinner - yum!!!! 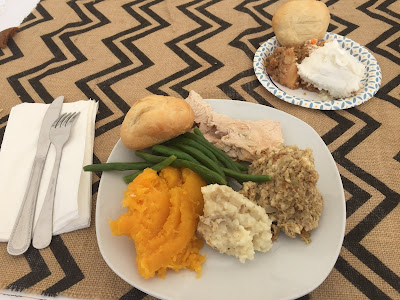 I rocked a sweet handlebar mustache for the race - not so popular with my wife so it got shaved off upon returning home! 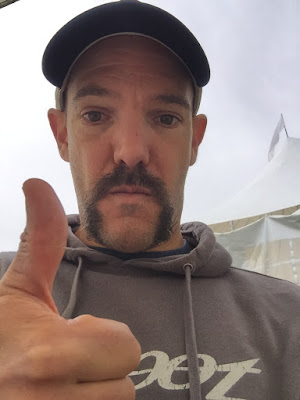 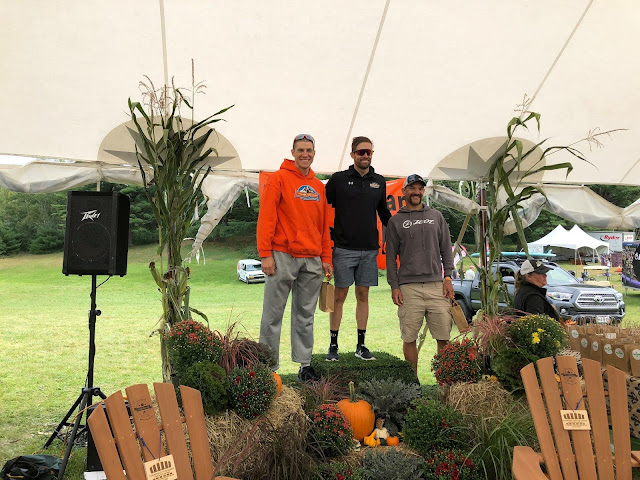 During the race one person shouted "Go sketchy guy!" I guess the mustache wasn't my best look! 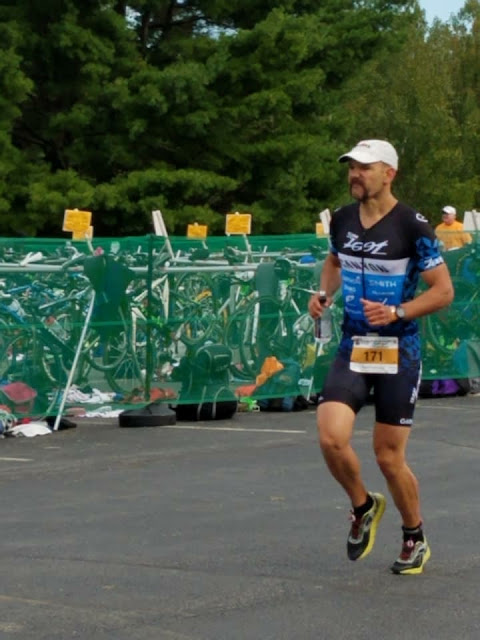 Looking forward, Katie and I are running the Marine Corps Marathon together at the end of October. My goal is to again pace her to an under 4 hour finish. I'm 90% committed to signing up for IM Norway next summer - we already have a hotel reservation. That would be combined with a trip to Denmark and northern Germany, where Katie's brother lives. Until next time....