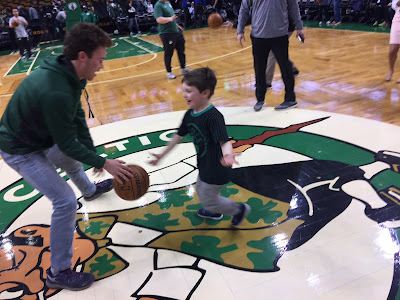 It's been nearly four months since I wrote last, and at that point it was winter. Today the temperature is supposed to get into the mid 90's, so definitely a bit of a change! But back to the winter....a bit after completing the Hyannis Marathon we had the good fortune of being able to attend a Celtics game courtesy of my wife's cousin. He rowed in college and was in the same boat with the owner of the Celtics. We went to the game with them and we were able to go onto the court before the game and sit in the 2nd row behind the basket for the game. The picture here is of Jackson playing with his 2nd cousin at center-court! It was a pretty awesome experience. Those NBA guys are darn big! The Celtics ended up edging the Raptors, and it was a great game to watch. 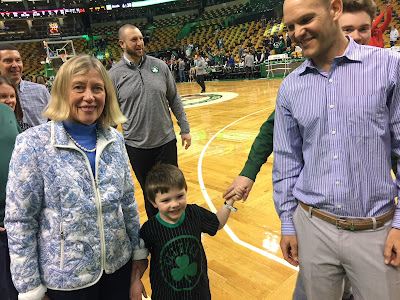 A few weeks later we headed to Bermuda for April vacation. Being teachers and sharing vacations is a great thing! We stayed with Katie's folks at their time share in St. George and had a wonderful time. The weather was a bit warmer than last year, and we were able to get to the beach a few times. I swam each morning in the 20m pool and logged just over 20k yards in six days. 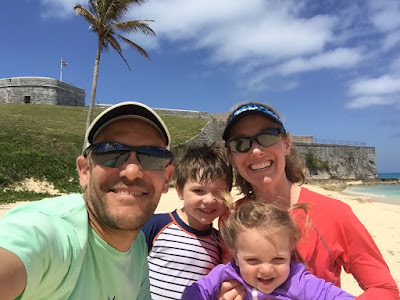 Two weeks before heading to Bermuda my left IT Band felt a little sore, and having experienced a 6+ month debilitating bout of ITBS several years I decided to take it easy. I took a week off completely from running and got in about 270 miles of biking. While in Bermuda I began to ease back into running, capping runs at around 40 minutes. I was doing a variety of stretches and exercises with cords for the IT Band. Fast forward to today, and it seems like I dodged a bullet. I was able to slowly ramp the mileage up, getting in five weeks around 40 mpw heading into Quassy after some unstructured weeks of running. 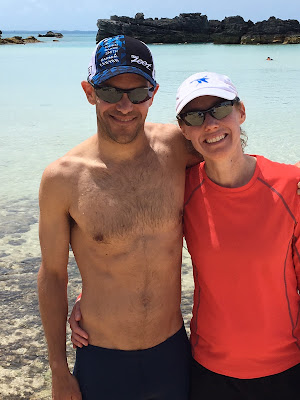 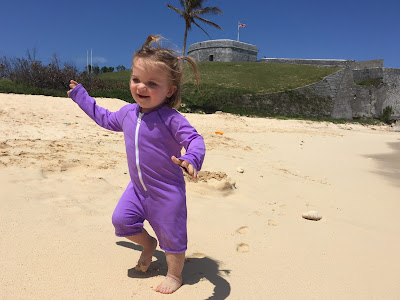 In terms of overall training, I've decided to follow the mantra that IM racing is all about the bike. I've been logging my biggest bike volume ever and got in just over 1,000 miles in May. Running is back to around 5 hours a week, but swimming is still hard to fit in. I've averaged around two swims a week since getting back from Bermuda, and know this isn't ideal for IMLP. With this being the final week of school, I should be able to swim three times a week over the next five weeks heading into IMLP. Based on pool swims and my swim at Quassy, I feel like I should be close to times in the past - hopefully in the 1:05-1:07 range. 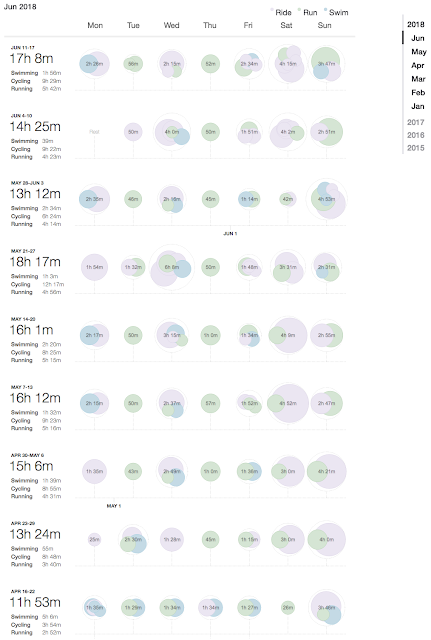 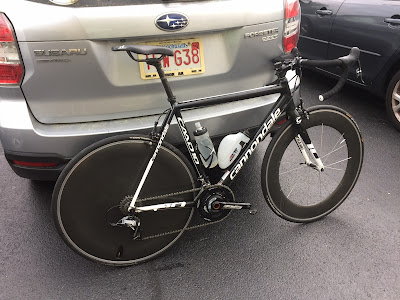 My first race of the year was the Rev3 Quassy Half. Three years ago I was ready to do this race, but had a running injury going in, so it became an aqua-bike. This year I felt great heading into the race and thought I'd be in a good position to contend for the OA podium. Bike fitness was great, my run was returning and my swim would put me in an ok position. However, during the week leading into the race my rear shifter (SRAM R2C) began acting up, and stopped working. I scheduled VeloFix and my buddy Gunther to come have a look. On the day before the race I got the news from him that the shifter was a no go - a 'wave' washer was broken, and there was no way to fix it. On to plan B - throw the race wheels on the road bike and give it a go. The only good think about this option is that Quassy has around 4,000 ft of elevation. Even so, the difference according to Best Bike Split would be around six minutes on the road bike.

In the swim corral right before the race I was chatting with my Team Zoot teammate Steve Vargo, who ended up as the overall winner. I told him I was going to shoot for the top bike split on the roadie. After a decent swim based on my minimal swim training (33 min), it was on to the bike. Turns out it wasn't such a bad idea to hammer it on the roadie, and I was able to best the next best time by just over 1:30. On the climbs I passed everyone I encountered, but on the downhills, and slight ups and downs I gave back loads of time. No matter how aero I attempted to get, there is no way to replicate riding on aero bars when all you've got is the drops. 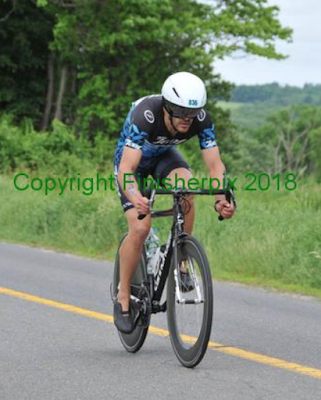 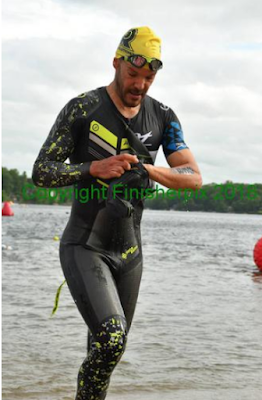 The bike numbers ended up as 263 AP, 281 NP. I lost a considerable amount of power over the past 30 or so minutes, as the course has a net decent at that point. However, without the tri bike I lost a good chunk of time over that time period. I finished the bike in 2:28, but know with the tri bike it would have been a lot closer to 2:20. Oh well - lemonade from lemons, right? Out and onto the run. 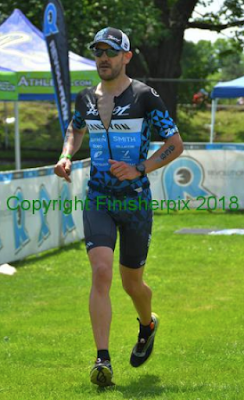 From the outset of the run I just wasn't into it mentally. Not having the tri bike and not being in the position I was capable of was a bit demoralizing. The bike course is pretty up and down, and the run certainly didn't disappoint on this front. There was over 1,000 ft of elevation on the run, with the first two or so miles being down, followed by lots of steep ups and down on the two loop course. Around mile seven I unfortunately had to visit the porta-pottie for #2. Trying to get a sleeved suit down and then back up when it's soaked isn't exactly a quick process. Next time I'll began taking it off before getting on the throne! I kind of mailed it in a bit after the deuce break. I knew my goal of the possible overall win and podium was gone, and I thought that if I backed off on the run a bit I'd be able to recover quicker and get right back into training for Lake Placid.

My run time of 1:36 was pretty crappy, but actually two minutes quicker than Eagleman around the same time last year. That course had about two feet of elevation - combined for the bike and run! It was the heat last year that did me in. As I crossed the finish line I had no clue where I was placement wise. It turns out I finished 7th OA and 1st in my AG in 4:41. I was eight minutes off the win - with the tri bike I would have been right up there and had far more motivation on the run. However, my legs certainly felt a lot better than when I've pushed the whole run in a 70.3, and I was able to get back to training pretty quick. The Wednesday after the race I was able to get in four hours and feel pretty good.

Speaking of that training, I'm feeling pretty good with just over five weeks to go until Lake Placid. My bike fitness seems great, and I have plans to try getting in one or two more 100 mile rides - so far I've done one. Most of my long rides have been in the 3-4 hour range and have had an average power of 10-20% more than I'll aim for on race day. My run is also coming around. After feeling no ITB pain at Quassy I've gotten in 16.5 and 18 mile runs over the past two weeks. The HR has stayed pretty low and the pace has been inching a bit faster. If I can keep the injury bug at bay, have no more bike issues, and get in some decent swim yardage I feel that my result at IMLP can be a good one.