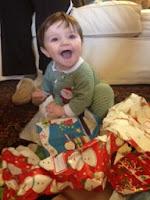 2013 has come to a close and with it brought the birth of our first child, Jackson. He was born on April Fool's Day, and he just turned 9-months old on January 1st. Seeing him grow and learn virtually something new each day has been amazing. He wants to be mobile, but isn't there quite yet! Here's the little guy on Christmas morning.

Unfortunately, at the same time that Jackson is just beginning to get mobile my Dad is going in the opposite direction.  He has Alzheimer's and Parkinson's, which isn't a great combination. His memory is fading and combined with the Parkinson's, each day is a brand new learning experience of everyday activities. I'm glad that he's been able to interact with our little man. Here are my Mom & Dad with Jackson this summer. 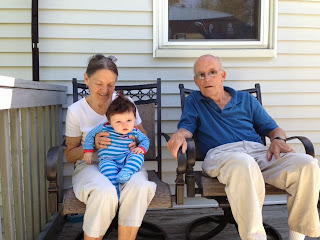 Of course, having a baby at home made training difficult. Katie was very flexible in allowing me to get in long rides and runs over the spring and summer, but in hindsight doing an IM with a baby at home probably wasn't the best plan. I was away for 5-6 hour blocks of time on most weekends, which wasn't fair to Katie. I'm definitely enjoying spending more time with Jackson now that training is a bit lighter.

2013 began with news that I was selected by Steve Johnson of Darkhorse Multisport to be sponsored for the year, receiving free coaching. Steve immediately had me doing a lot more swimming than I had in the past, as well as different types of bike workouts. I had traditionally done the 2x20 or 3x15 interval rides at 90-95% FTP as my go to workouts, but Steve had me doing lots of shorter intervals at much higher intensities. One that I despised quite a lot was 40x30" @ around 410 watts on 30" rest. Steve slowly had me build up my run mileage, focusing on a half marathon at the end of May, which led into a June 70.3.

I ended with a time of 1:20 in the half marathon, nearly a 3 min PR and went under 4:30 for the first time in my June HIM, although I felt I left quite a lot of time on the table. Soon after those races the school year ended and Katie, Jackson and I headed to Nantucket for ten days with my folks. This is pretty much when the long runs and rides for IM prep began. I ended up doing a 4-5 hour ride virtually every weekend, with eight rides of 90+ miles, six of which were over 100, and the longest was 123 miles in 5:30 two weeks out from IMMT in early August. This ride was followed up the next day with a 20+ mile run at 7:22 pace for an average. I felt good and strong and confident about my chances of a KQ at Tremblant.

IMMT got off to a good start, and I had what I felt was a strong swim, coming out of the water in 1:06. T1 was a long run, but I got on the bike feeling my weakest leg was behind me and I was positioned well. I was very consistent on the bike, but my watts ended up a little lower than I felt I could have put out. Based on training, Steve and I felt that 240-245 watts was my target. I ended up at 232 AP and 242 NP, evenly splitting 2:33 for each of the two loops. Coming off the bike I thought I was near the top 10 in my AG and should be able to run some folks down. I felt amazing for the first several miles of the run, and may have pushed a tiny bit too hard, with the first 6 miles hitting a pace in the mid 7:20's. However, because I was feeling so great at the time I neglected to take in any nutrition, and this began to come back to haunt me. I was taking coke at the aid stations, but didn't use any of the 700 calories I had on me or any of my salt pills. I honestly don't know why I didn't take in my nutrition, but my pace began to slow, and by the last loop of the run I was running 8:15-8:30 pace. I also had to make a bathroom stop around mile 19, which didn't help.

As I approached the end of the run I was still holding out hope that I may grab one of the remaining slots for the AG. However, I was passed by two guys in the last 1/4 mile and I had nothing left, briefly trying to hang with them, finishing six seconds back. As it turned out, they each got the last two Kona slots. Looking back, I feel it was probably best that I didn't get a KQ. It would have meant another 7 weeks of longer rides and runs, and with the school year beginning, that would not have been fair for Katie, plus traveling to Hawaii with a six-month old would have been difficult.

I was crushed after the race, realizing that my one real goal for the year had eluded me by 7 little seconds. Still hungry for competition, I formulated a plan to drive 700 miles to Ontario in early September to race Muskoka 70.3 and grab a WC slot for 2014. Katie wasn't thrilled with the notion, but agreed. Three weeks after IMMT, I managed a 5th in my AG and 32nd overall at Muskoka and did get a slot for the 70.3 WC, which will be held at Tremblant. I believe a bit of redemption will be in order!

The week after returning from my sojurn to Ontario I got into the Boston Marathon, so that is my current focus. My goal is a sub 3:00 race, and if training goes well, I feel I can be somewhere in the low to mid 2:5x range. I have decided to stick with Darkhorse Multisport for the 2014 season, and Steve is helping me formulate a way to crush Boston! I'm right around 50 mpw for running, getting in one bike and two swims per week. My goal over the winter is to try and maintain my bike and swim fitness, then ramp up after Boston in April to have a strong showing at Patriot HIM, Timberman 70.3 and the 70.3 WC's. Here's my best 'hungry' race photo, hoping 2014 is a great year! 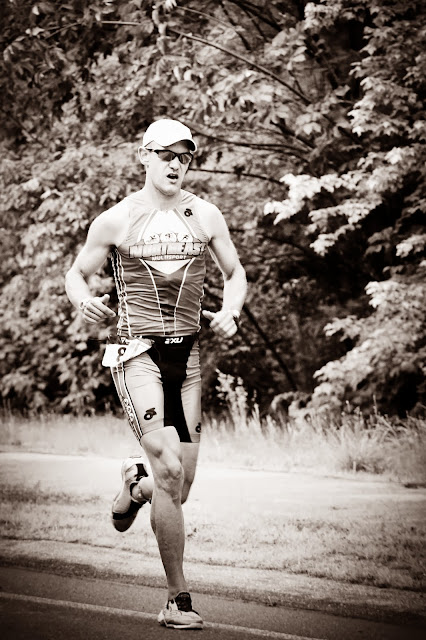