After ten years racing triathlons I feel that I'm finally beginning to reap the rewards of all of those miles in my legs. In previous years I did one track session virtually every Wednesday (or intervals on the treadmill in the winter) and often some faster miles built into most of my longer weekend runs. This year I've gone more to longer tempo intervals (4-7 miles around open half marathon to 70.3 run pace), and generally doing less 'fast' miles in my run training. The funny thing (at least to me) is that I've had run PR's at both 70.3 and 140.6 this year, as well as almost matching a half marathon PR from six years ago. I guess the 'mostly slow, sometimes fast' philosophy is sound!

In the period between Ironman Norway at the end of June and 70.3 Maine, which was a period of eight weeks, I think I may have run a grand total of 15 miles under 7:00 pace. Yet, I was able to set a two minute 70.3 run PR of 1:27, which I felt was attainable heading into the race.

Katie and I made the decision that this would be a race I'd do on my own. On the day prior to the race I made the two hour drive from our house to Old Orchard Beach, Maine to do packet pickup and drop off my bike. Things went pretty smoothly, and I soon headed to my uncle and aunt's house in Cumberland, Maine, which is around 30 minutes north of Old Orchard Beach. I had a great dinner with them and enjoyed catching up. I was in bed by around 9 PM with the alarm sent for 3 AM on Sunday morning.

Breakfast on race morning entailed a Cliff Bar, Plain Bagel, and a Gatorade - around 700 calories. I left their house around 3:45 AM after getting lots of kisses from Bella, my uncle and aunt's lab, who was pretty psyched that I was up so early! The drive back to Old Orchard Beach took just under 30 minutes, and I found a parking spot on a side street about a quarter mile from the finish line. It took me around 10 minutes to walk to transition, which had opened at 4:30 AM.

It was a pretty calm morning, and I got stuff set up on my bike as well as my run gear. Nothing was new on the bike - the usual HED disc and 9 front w/latex tubes and Conti 5000's. Nutrition was around 700 calories of Infinit in a seat-tube bottle and a BTA bottle with water. For the run, I was trying out the new Nike Next%, which had a grand total of 2 miles heading into the race. Nothing new on race day, right? Technically not new if there are two miles! 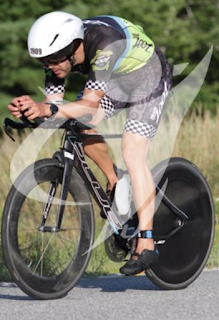 The swim at this race is a rolling start from the beach. Based on swim times from the previous year, it looked like a pretty fast swim course. I knew a few folks around my ability who had swum around 30 minutes the previous year, so I positioned myself at the back end of the 27-30 min group. There were some slight waves to deal with getting into the water, and I expected it to calm down a bit. However, the farther out from the beach we got, the more of a swell and a bit of chop there was. Other than AG Nationals in Burlington many years ago, I'd say it was the most 'hilly' swim I've done. I actually felt pretty decent in the water, but finished in 36 minutes. Only two non-wetsuit swims - 70.3 Worlds in Vegas and Chattanooga (although this one was b/c I didn't bring my wetsuit) - were slower for me. Swim times this year were 5-6 min slower across the board compared to last year. The fastest swim was a little under 29 minutes this year, and last year around 23 minutes. No worries - can't control the past - on to the bike.

I got through the relatively long run to T2 and was off and out on the bike course, which I expected to finish in around 2:12. Again, looking at guys I've raced before and what I've done against them, coupled with BBS, I thought 2:12 was attainable on around 270 watts. The first portion of the bike course is rolling and then has a decent climb from around 45 minutes in to just before the hour mark. After that, it was mostly flat and downhill. I assumed the first half of the ride would go by in around 1:07-1:08 and the second half in around 1:04-1:05. However, the second portion of the bike loop had some pretty good open stretches where there was a steady headwind. I did my best to hide from the wind, but it didn't seem to help out! As a result of the winds, I finished around 2:15, which turned out being the top bike time of the day by a few minutes. Power was a few watts lower than planned, but not enough to make up a ~3 min loss in time. On to the run... 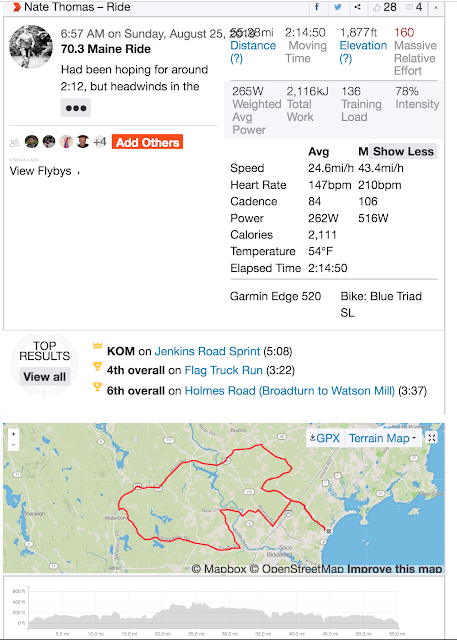 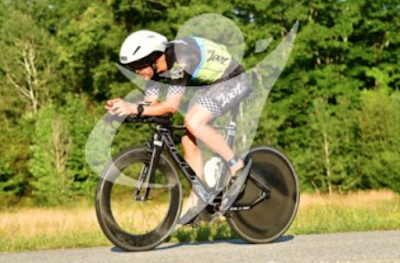 During the tail end of the bike course both of my hamstrings felt a little tight, but I knew from pervious races that this wasn't a real concern. It's always a good feeling coming into transition, getting to your rack area, and seeing no other bikes. This was the case, and I was quickly into the shoes. I'd tried out some elastic laces with the Next%, but couldn't find the right tension - maybe I'll play with this a bit more before Kona. I had made the decision to just go with laces, but I opened the shoes real wide and put the tongue way forward. I was able to have each sock & shoe on and laced in around 15 seconds. Definitely a few wasted seconds with the regular laces, but I wanted a secure fit for the run. 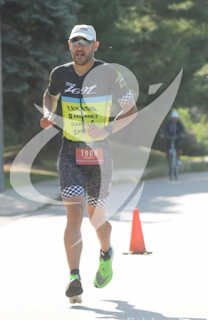 My legs felt real good, so I headed out with a target pace of 6:40 or faster. The first mile turned out to be the second slowest of the day at 6:48 - it had one of the largest elevation gains at 80 ft. The course setup is essentially a couple miles out of town to a gravel trail that's pretty flat. You head on the trail for about two miles, reverse about a mile, then turn left for a loop that meets up about a mile into the opening part of the run. Repeat that loop, then head home at the end. I was quite consistent in my pacing - the quickest mile was 6:33 and the slowest was 6:52. I felt good throughout and in hindsight think I could have probably gone a bit faster. I was pretty spot on with my goal effort and finished the run a bit over 1:27, which is around a two minute run PR for the 70.3 distance.

During the end of the first loop I was passed by a guy who was absolutely flying. It turns out he was part of a relay and ran a 1:16 split. In the final half mile I was passed by someone in my AG, but I couldn't reel him back in. He ended up crossing the line a few seconds ahead of me, but with the rolling start he had started behind me. I ended up with my first AG win at an Ironman event, beating the 2nd place finisher by 53 seconds. My finishing time was 4:26 and I was also 7th overall. 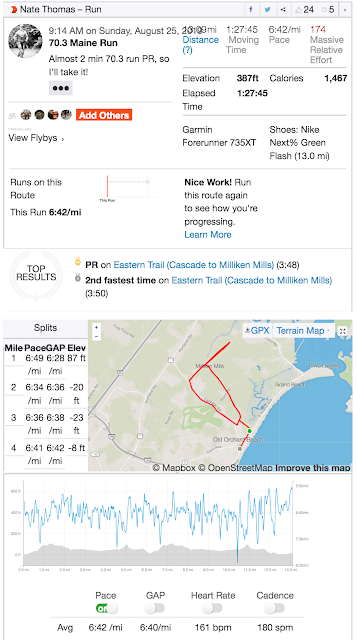 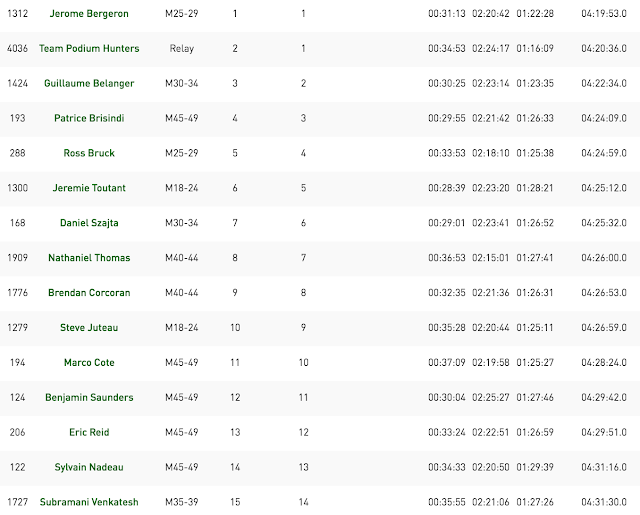 Looking back at the race after several days, I feel it was one of my better 70.3 races. I didn't end up with the finishing time that I'd hoped for, but I paced myself properly, took in nutrition, and finished with a strong run. It was also my best overall placing in terms of AG and overall in an Ironman branded event.

There are now six weeks remaining until the big day on the Big Island. We fly out from Boston on the Wednesday prior to the race, and arrive in Kona around 1:30 PM on that day. We depart Hawaii on Monday following the race. The whole family is coming, and we're going to try to make it a mini vacation. We will do a glass bottom boat tour and visit Volcano Nat'l Park. I guess my overall goal for for the race is finishing in under 10 hours, but I honestly have no clue how things will go. I have done some races in heat and humidity before, but nothing quite like what Kona has to offer. I should have a good four week build, and then two taper weeks headed into the race.