As the tri season came to a close this year I felt that my run had become my biggest limiter. The swim is actually my weakest area, but I feel I'd have to put in a ton of pool time to see some small gains. I decided to attack my run and focus for five or so months on becoming a better runner, and so far, it seems to be working.

In September I began to slowly increase my run volume, going from around 35 mpw up to 47 by the end of the month. I was looking towards a November half marathon and a December 5k, so I needed to balance both speed and distance work. October was a pretty solid month of running, and I wound up with a total of 222 miles.

In mid-October I visited my folks on Nantucket and ran in a half marathon there. We had actually planned on visiting them on the previous weekend, but wind prevented the boats from running. When I realized we'd be there on the week of a half marathon, I quickly signed up. I ended up winning the race in 1:24 and took home $100. About 5.5 miles of the race was on dirt roads, definitely slowing things down a bit.

October was also a month of lots of leaves, and I also ended up spending some time working on Jackson's Halloween costume. He loves Thomas the Train, and I decided to make his costume. Initially, the plan was to spend 3-4 hours. By the time I was done, I'd probably put in the same time on his costume as I did running in October, over 20 hours! Jackson loved helping clean up the leaves as well! 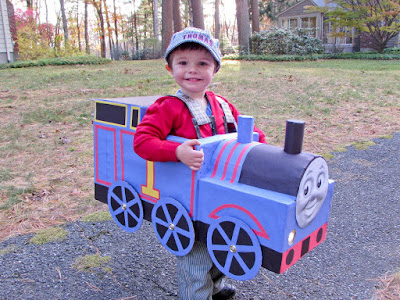 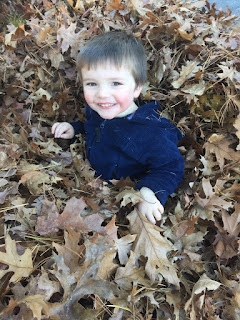 After the race on Nantucket, my focus shifted to another half marathon six weeks later. I ramped up my volume and got in a few weeks right around 60 miles, before a relatively easy week heading into the race. I was hoping to use this race as a qualifying race for the NYC Marathon, as they allow half marathon qualifying times. In the race, I think I went out a little bit too fast, and went through the first 6 miles in around 36:30. The race, which was around 50% on hard packed dirt trails, had two loops, and I began to fade a little on the 2nd loop. My finishing time ended up being a little over 1:21 (off a PR by about a minute), which should be good enough to get into NYC next fall - at least that's the hope - and I can try for that sub 3:00 marathon that's eluded me thus far.

Following the November race, I pushed the volume a tiny bid higher, finishing November with a total of 245 miles, and getting back up to 60+ mile weeks. Training this fall had been a bit of a balance for half marathons, but I had also signed up for a 5k in December, so I needed to be doing some speed-work. Each Wednesday was intervals on the treadmill, and by mid December I was feeling pretty confident that a PR was in sight! Based on training, I thought that a time in the 17:20's was a feasible, which would be a solid improvement on a 17:45 PR from three years ago. 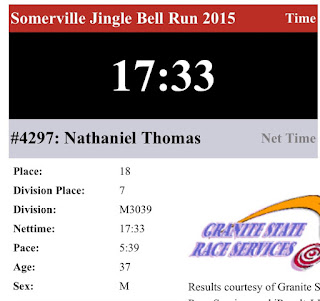 The next goal is a sub 1:19 half marathon in March. I feel this is attainable with a bit more run fitness gains, as well as a bit better diet and resulting weight loss. With the increased run volume, I'm hoping to be running mid 1:2x off the bike in three planned HIM's in 2016. The plan is to continue with a emphasis on running through January, and begin incorporating more biking and swimming after the new year. The first race on my 2016 schedule will be 70.3 Florida in April. This will be a fun get-away race, and lots of other NEMS team members will be racing as well!