On April 1st I officially became a father, and the experience is unlike anything I've ever gone through. I'm now able to add 'Dad' to my repertoire of vocabulary words. Katie did an amazing job, and our 'little' man, Jackson Edward Thomas, was born at 10:08 AM weighing in at 10lb 13oz - quite the chubby fellow! We spent four nights in the hospital as a result of Katie's c-section. He had to be hooked up to some monitors initially because of low blood sugar and oxygen levels. Here I am holding him on the afternoon of April 1st. 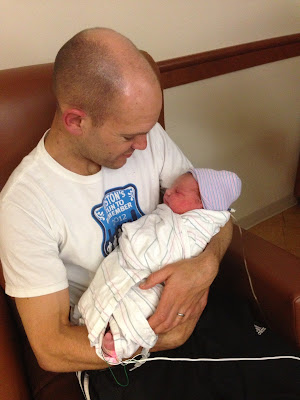 We got home on Friday (April 5th), and have spent three nights with Jackson. The first night was actually pretty 'easy' and we got around 6 hours of sleep. The second night was quite different, and Jackson didn't really settle until 4 AM. We had a 9:30 AM doctors appointment that morning, which meant a night with little sleep. He checked out great at his appointment and is down to 10lb 4oz. Last night was a bit better than the previous night, and he settled a few hours earlier, allowing for 6 or so hours of sleep. So far, he seems to be a better day sleeper than a night sleeper. We'll be working on trying to flip-flop that for our sanity.

Katie and I timed Jackson's arrival quite well, as I took off two weeks from work, which leads right into April vacation at school. This will give me three weeks at home with the little guy. Katie is taking off the remainder of the school year, which will give her five months at home with Jackson.

It truly is amazing to think that we are now responsible for another life. Having Jackson stare into our eyes is so cool - what's going on inside that head of his?? He loves to be bundled up in a swaddle and also enjoys sleeping on my chest when I lie down. Here he is soon after getting home. 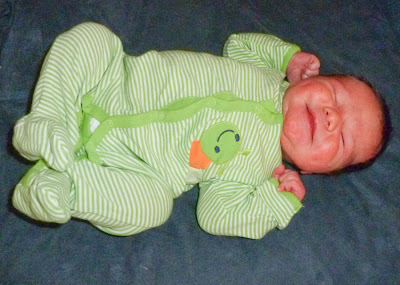 I'll be working with Steve, my coach at Darkhorse Multisport, to fit in training time around Jackson's sleep schedule. I was able to get in a good swim and run yesterday, and that will be the biggest training day of the week. Katie is 'willing' to allow my training to continue, but I'll have to be flexible in terms of when I can get it in, and some days it may not happen. I think the hardest thing will be getting enough sleep, and we'll be trying to take naps when Jackson is sleeping during the day to make up for lost sleep at night.