On December 31st I began my year of sponsorship with Dark Horse Multisport. My goal for the 2013 season is simple: get to Kona, and I know Steve will get me there! After one month of working with Steve I feel like I have already made some solid gains. The most notable change in training has been a serious increase in swim yardage.

In previous years, I maxed out my swimming at around 40,000 yards per month, and have swum in the range of 300,000-350,000 yards a year. In my first month with Steve as my coach I swam just under 60,000 yards and have already shown some solid gains in the pool. My paces are incrementally getting a bit faster, and my endurance is definitely increasing. I also am no longer in fear of doing 4,000+ yard workouts - I'm actually starting to enjoy the water - weird, huh?

My offseason in the past has usually been run focused, and I've generally spent 2-3 hours on the trainer. I've been putting in about the same amount of time on the trainer, but the intervals have been more demanding than what I've done in the past. My usual go to workouts had been 3x15 or 2x20 at 90-95%. Steve has me doing a lot of 30" intervals at 130% and max efforts in addition to some of the 'sweet spot' intervals.

The result of this new bike training has been a bump up in my power. At my tri team's indoor TT I was able to come in 2nd @ 360 watts on the Computrainer (352 on my PT). Last year I put out 336 on my PT, so roughly a 5% increase from this time last year. Here I am somewhere in the pain cave: 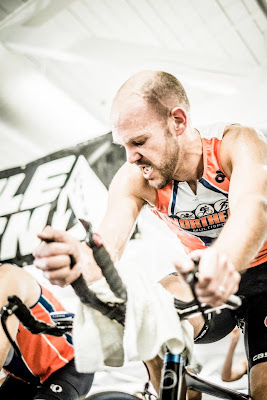 I also put my run training to the test this afternoon in a 5k in Lowell. I had been doing 1/4 mile repeats at around 5:20-5:25 pace, and was hoping to be around 17:30 in the race. However, it was just one of those days where I didn't feel that great, and I ended up at 17:51, 9 seconds of my PR. I'm planning on another 5k in two weeks - hopefully the legs will be there for that one.