Two weeks after our venture to Vegas, I can now look back and reflect on my experience at the 70.3 World Championships. It's said that Vegas has a dry heat, but 100 degrees is still 100 degrees, and while we were there the humidity was higher than usual (in the 30-35% range).

Katie and I arrived in Vegas on Friday morning, going to pick up my race packet, checking in to our hotel in Henderson, then heading over to the T1 area for the welcome dinner. I also squeezed in a quick ride before dinner. 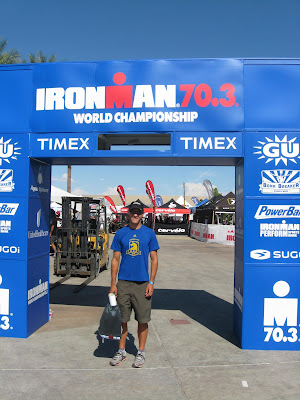 On Saturday morning I went back to T1 for the practice swim, and followed that with a quick 2 mile run. Later in the day we dropped off my bike (back at T1), then dropped off my run gear at T2. Dinner was at Olive Garden, and I was in bed by 8:30.

Race day arrived, and I was up just before 4 AM. Our hotel opened up breakfast for racers, so I headed down for a bagel, oatmeal, OJ, and coffee. Katie and I were then off to T1, and she dropped me off around 5:20. It took a little time to set up my bike and borrow a pump to inflate my tires.

My wave (#7) didn't start until 7:00, so once I left T1 I waited along Lake Las Vegas with others from my wave and chatted until it was time to get in the water. My goal for the swim was around 35 minutes. I had felt good in the practice swim and swam 1/2 a mile in 14 minutes, which I felt would translate into a 35ish swim. It may have been the hot water (84 degrees), or maybe my choice to take a direct line to the first turn buoy instead of drafting, but I ended up swimming just over 38 minutes. Here I am coming out of the water, and realizing how slow I went. 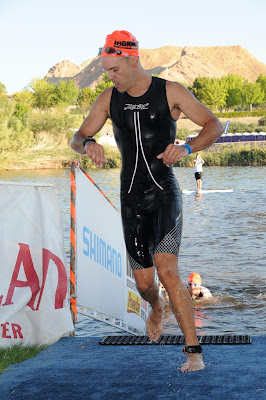 On to T1. There was a run around the end of the lake (T1 is pretty much across the water behind me in the pic where you can see the port-a-potties). It is never a good sign when it's very easy to find your bike, and mine was one of only a handful on the M30-34 rack. I grabbed my bike, and headed up the short hill to the mount line.

My goal for the bike was to average 275-280 watts, which I hoped would translate into a time of around 2:25. I had averaged 278 watts at Tremblant 70.3, so this goal seemed reasonable. However, the heat seemed to get to me. At Tremblant my HR averaged 154, but by the one hour mark my HR was in the low 160's and I was averaging right at 270 watts. I knew that at that HR with the heat I'd have a longer than planned day. I decided around the turn-around to dial back the power and go more off HR. Even though this translated into a slower bike time, I really feel it helped me have a decent run.

The majority of the biking at this race took place in the Lake Mead Park, which is pretty much a desert with a road running through it. My Garmin 500 pegged the average temp during the bike at 92 degrees, but it was definitely hotter than that near the end. To combat the heat I went through seven bottles of water plus a 500 calorie bottle of Infinit. I also took 8 salt caps on the bike. 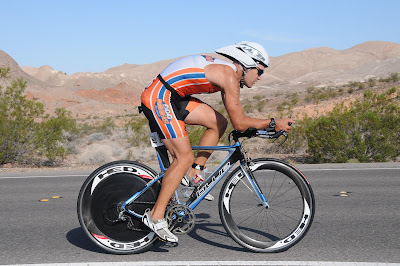 By the end of the bike leg my power average was down to 241, 10% lower than what I was expecting, and my bike time ended up being 2:31. Again, a bit off of what I was hoping for. It wasn't time to dwell on the negative, though, as I arrived in T2.

Having been to T2 a few times for registration and T2 drop off, I knew about the hills and layout of the 3-loop course. After putting on my hat, shoes, and FuelBelt, I was off. The run course never really felt overly steep, but it's pretty much a constant up or down. The first mile was down, and I felt pretty solid, coming in around 6:40.

My goal was to aim for around 6:40's on the downs and 7:40's on the up portion. After the turnaround just after the first mile, it was two miles up, then two down, two up, two down, two up, and one down. In all there was around 1300 ft of climbing, and the heat was climbing, peaking at 100 degrees a little after I crossed the finish line.

There was never really a time when I felt bad, but the heat just kept slowing me down, little by little. I just couldn't get my legs to turn over at the rate that I wanted. I was actually passing quite a few people, but just not at the speed I was hoping for. 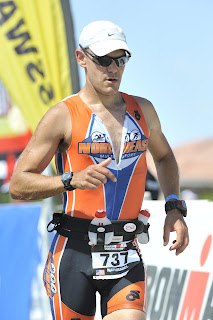 Going into the race, I knew that the heat would slow me down, and I realistically thought that a time around 4:40 was reasonable. However, during each leg I was 3-5 minutes slower than my 'A' goal, which translated into a run time of 1:36 and a finish time of 4:52, good enough for 199th overall. I wasn't really pleased with the time, but I soon realized that a lot of people were much slower than their goal. 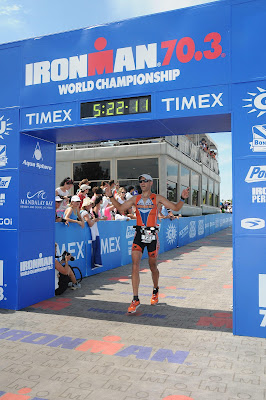 It wasn't until I actually stopped that I actually felt the heat. I guess while I was moving it didn't seem quite as hot, but stopping made the heat feel truly oppressive. I went into the food tent, but only felt like having a few pretzels. Eventually, I found Katie and got a massage. After that, we went down to pick up my bike, and headed back to the car. All in all, it was a good experience, albeit very hot! 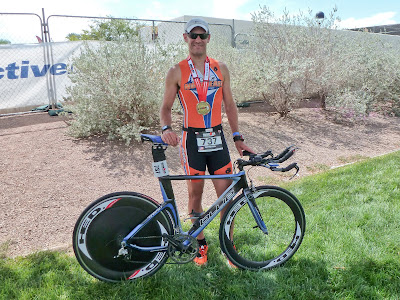